Despite openly confessing I have lost alot of enthusiasm for my Britain & Ireland list (and thus twitching B&I 'ticks'), I constantly had one eye on news back home whilst I was out in the Azores. This was accentuated by the fact that Britain and Ireland seemed to be receiving a constant westerly airflow that seemed destined to dump one or two juicy Nearctic birds on west-facing coasts at any moment. Luckily, that real biggie never came; the best in fact were two birds on Scilly, continuing a good autumn for the archipelago (what has happened to Ireland this year?!).

So, when arriving back in Lincolnshire on Monday to find both target birds were still present, it seemed wise to have a crack at them yesterday (Weds 19th). With local meat connoisseur Will Bowell confirming he had secured a rare day out of the butchers', things were set up to go very smoothly indeed. The drive down was problem-free and, although we couldn't find the Pec Sand at Drift early doors, we were soon on St. Mary's thanks to a sleep-filled outward journey on the Scillonian.

It was only when we arrived at Borough Farm did things start to become disjointed in our grand plan. The Upland Sand had flown off somewhere and wasn't showing - not to worry though, we strolled round to Watermill Lane where there were two absolutely stunning Olive-backed Pipits showing ludicrously well in a small field. 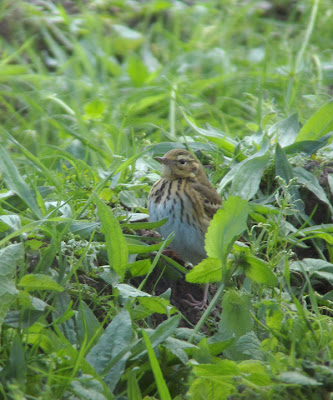 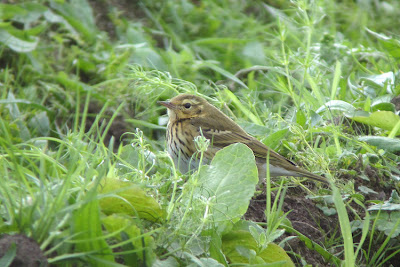 The 'duller' of the two OBPs

I'd only seen one OBP previously, that being last year on the saltmarsh at Stiffkey. Although that bird was close, it was bloody elusive and stayed amongst gorse and long grass for 95% of the time. Not these two though; they were on show more or less constantly as they fed amongst the furrows, and the constant tail-pumping was the first time I had noted such behaviour - amazing!

So, back round to the Upland, which we still couldn't locate. I decided to keep my eyes on the prize, and we walked back down to Lower Moors. No snipe... gargh! My previous experience with Wilson's Snipe has been painful, starting back in October 2007 on the Scillonian on the day the first bird that year was found. By the time the ferry had docked and we'd got to Lower Moors, it had done one, only to return the next day and gradually be confirmed as the month progressed. I've also had a bit of misfortune on the Azores - loads of people see Wilson's around the Archipelago (especially Terceira), but I've never seen anything but Commons. The trip in February was summed up nicely by a very interesting dark snipe I flushed on Pico once and saw once-only; the closest I've got to a likely Wilson's, but yet still so far. Surely the saga wasn't going to continue here today on Scilly, when the bird had been showing reliably virtually every day either at Lower Moors of Porth Hellick?!

Well in short, it did. We charged round to Porth Hellick to look there, but only had three Greenshanks on the pool. There was a very showy first-winter male Bluethroat at the seaward end of the boardwalk, but I'd manage to misplace my camera and so my mind was worrying elsewhere as I watched this little stunner walking round people's feet.

It turned out that the Upland Sandpiper had been re-found in the usual field up at Borough Farm so off we yomped again, up through Holy Vale to enjoy some really nice views of extra-terrestrial beast. Nice to see one on the ground for more than two seconds after experiences on Flores last week, although sadly the Scilly bird didn't utter that magical call (it's instantly become one of my favourite bird sounds). With relocating my camera at the top of my list, closely followed by the snipe, I was unable to enjoy the bird as fully as I would have done if relaxed, so I got a taxi down to Old Town where I was very fortunate to bump into the bloke who had picked up my camera at Lower Moors (thank you!).

The final half hour or so was spent in a noisy ISBG Hide at Lower Moors, longingly scanning the reeds for snipe but with no success. And that, via a sleepy ferry journey and six-hour drive home, was about it.
Posted by Josh Jones at 11:37