Had a good day out at Dungeness with Rich and Dante today. We had a six and a half Caspian Gulls - two first-winters (a really nice one and a less nice one), two third-winters and two adults plus a hybrid first-winter.

Most of these were scattered around Burrowes Pit at the RSPB reserve during the day, although the better of the two first-winters showed well near the fishing boats for a little while in the morning, albeit not long enough to really blow it away - but thanks to Martin for letting us know about it. Numbers were generally quite low around the fishing boats today, presumably due to the settled weather conditions. 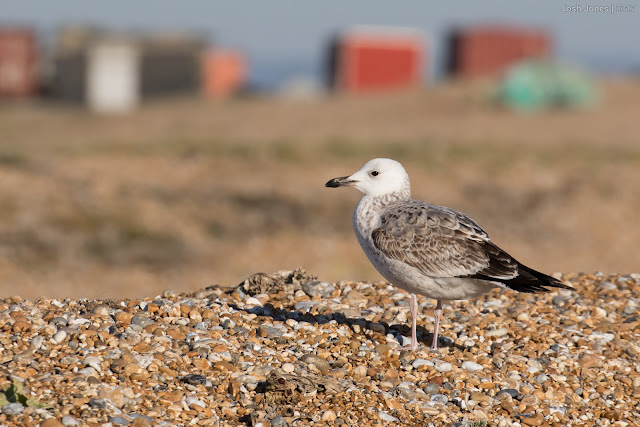 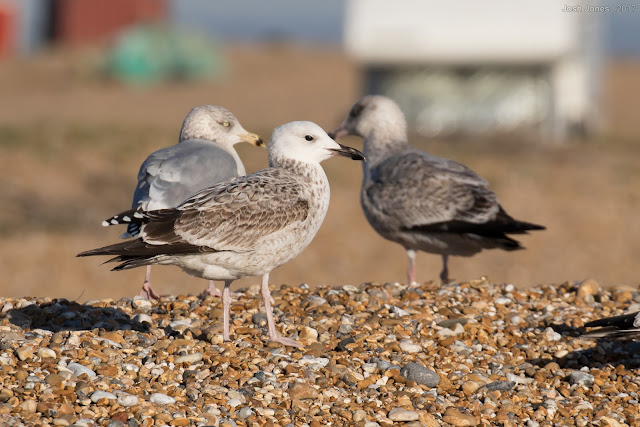 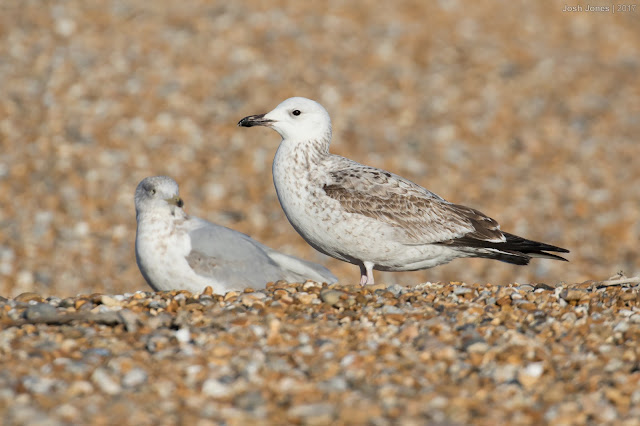 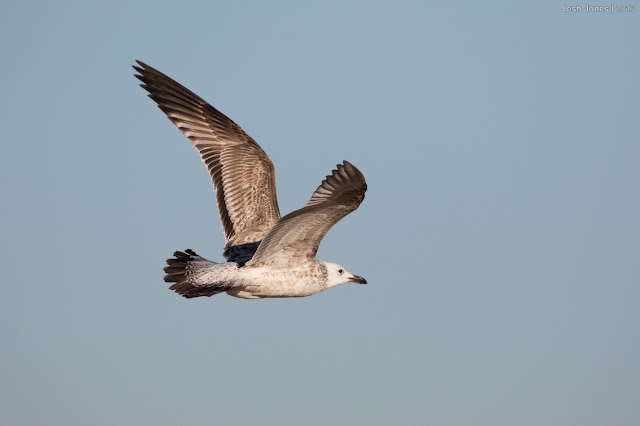 I also managed a few photos of the hybrid, a bird that I assume is, as Rich would say, 'German muck'. At a distance it looked quite Casp-like but, on better views, clearly wasn't, looking much more like a Herring with some Caspian qualities at closer range. It's quite a washed out bird and, in flight, looks pretty Herring-like with a huge window on the inner primaries. Underwing was pale, being a latte colour. It was otherwise a very pleasant, if cold, day's birding around the Dungeness peninsula. We enjoyed singles of Long-tailed Duck and Slavonian Grebe at Lade Pits, a pleasing 16 Bewick's Swans and a flyover Merlin from Cockles Bridge and Great Egret, two Ravens and six Goosanders on the RSPB reserve.
Posted by Josh Jones at 23:15 No comments:

Fuerteventura is a cheap place to visit in the depths of winter and, with its targets all relatively easy to see, it can comfortably be cleaned up in a weekend. With little else on for the second weekend of December, I'd booked flights with Jet2 from Stansted (£130 return including a hold bag) at the end of November.

Fortuitously, a few days after booking, the Western Palearctic's fifth Dwarf Bittern was found just a stone's throw from the airport, and it was no surprise then that this proved the first target on arrival on Friday afternoon. I was accompanied by Ed Stubbs, who'd been tempted to book his flights when the bittern broke, and we were enjoying this mega Afrotropical vagrant within minutes of arriving on site on Friday afternoon. 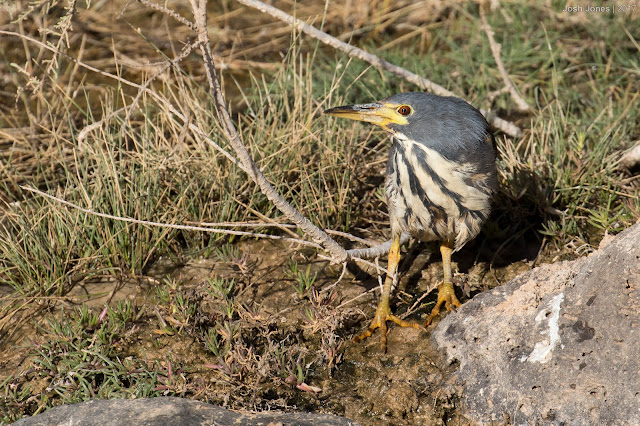 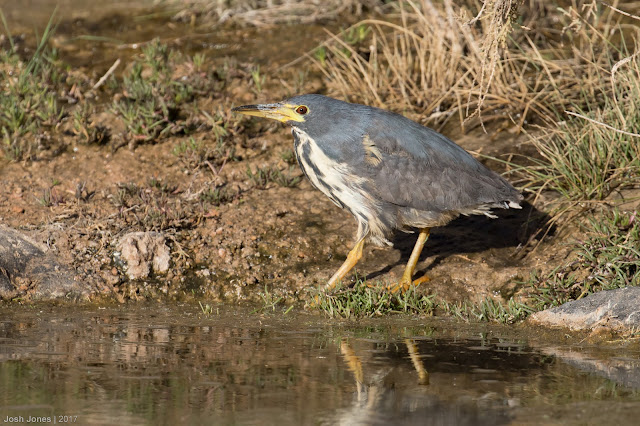 Also here were a couple of pairs of the local race of African Blue Tit, at least five Fuerteventura Chats (the first I'd seen since I was a young lad on holiday with my parents), several Egyptian Vultures and a variety of waders including Green Sandpipers and Little Ringed Plovers. As it transpired, this was actually one of the birdiest spots we visited on the entire island - no wonder it's produced both the bittern and (apparently) Allen's Gallinule in recent weeks.

Ed had booked a very reasonable apartment in Puerto del Rosario (£20 pppn) - dodgy door aside, it was excellent value. After some tapas and a few cervezas with Ed and Alan Lewis, we got our heads down.

We were at Tindaya for first light and had soon bagged a couple of Houbara Bustards - a new bird for both of us. We saw a total of five, but none was really close enough to be well photographed. Just a single Cream-coloured Courser was seen plus a handful of flyover Black-bellied Sandgrouse and the usual Southern Grey Shrikes, Berthelot's Pipits, Lesser Short-toed Larks and Trumpeter Finches. It was then back to the airport to collect Rich Bonser and chauffeur him to the bittern which, again, was showing on arrival - sounds like we've been quite lucky as there are stories of birders waiting for hours. The bittern showed terrifically, albeit in the strong early afternoon sunshine, as did a pair of Fuerteventura Chats. 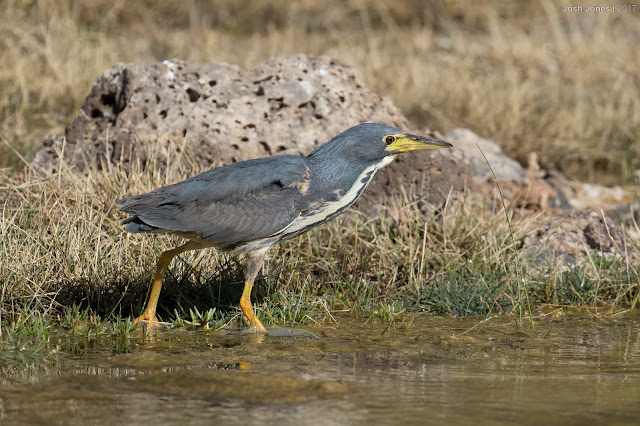 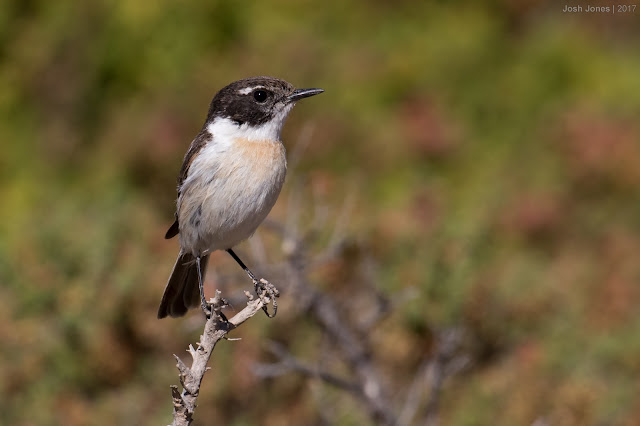 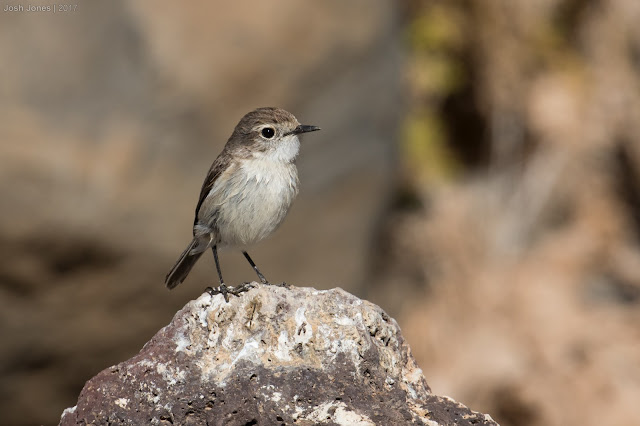 We spent some time searching sites along the coast, all of which turned to be absolutely pants, so we headed over to the reservoir at Los Molinos. Here there was a throng of noisy Ruddy Shelducks, a male European Stonechat and a few Spoonbills and Snipe. 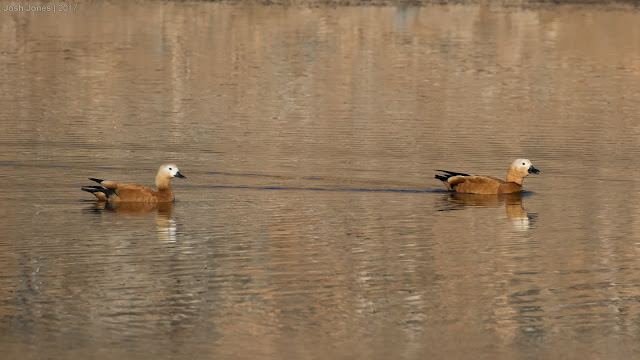 Another pleasant evening of Spanish cuisine and beers followed, with another early morning start at Tindaya on the Sunday producing at least four more bustards and, finally, a showy one that walked across the track in front of us. 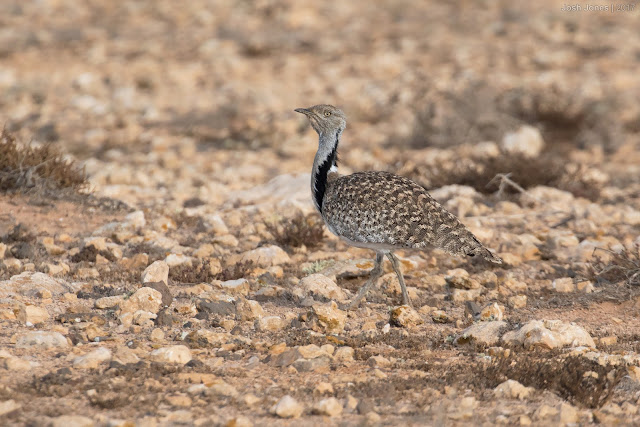 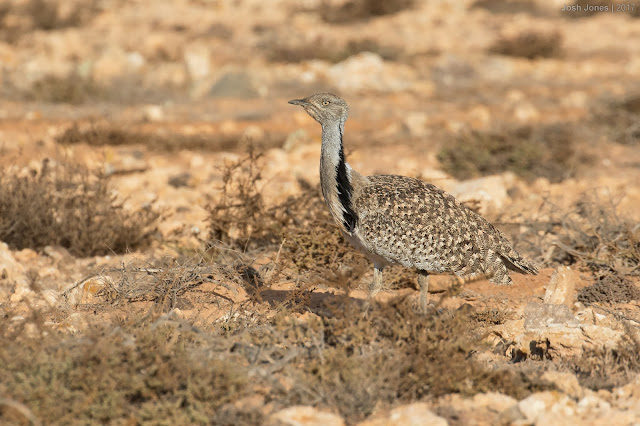 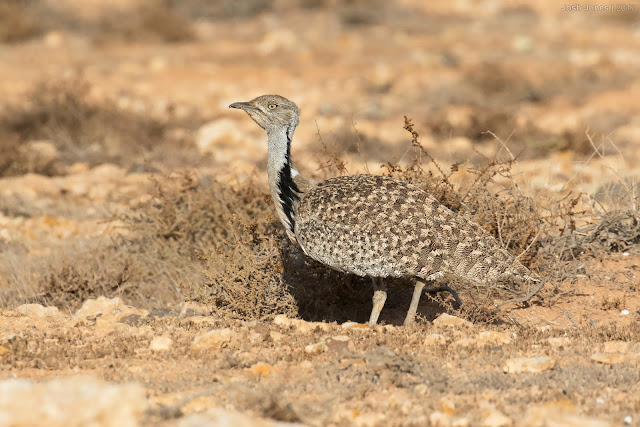 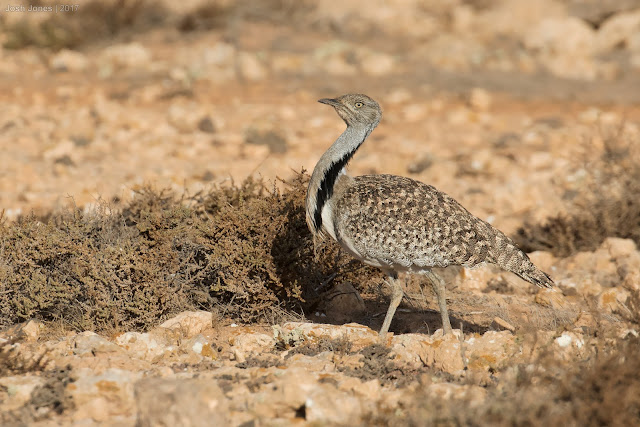 The less said about the rest of the weekend (i.e. waiting in airports for delayed flights), the better.
Posted by Josh Jones at 20:46 No comments: