Just back from an Irish trip with Richard Bonser and Marc Read, which was a general success. To cut a long story short, the seawatching was very poor (numbers of even common birds very poor this year), although we did score a Fea's.

Most of the time was therefore spent doing anything but seawatching, with popular activities including drinking cheap, supermarket-brand continental lager, general pratting around and the occasional bit of birding.

After an overnight drive/ferry journey, our first port of call was Blennerville on 21st. Here, the American Herring Gull was located in the channel upstream of the windmill. Whilst it still looks pretty offensive, things look like they are on the up plumage-wise as the photo below shows. 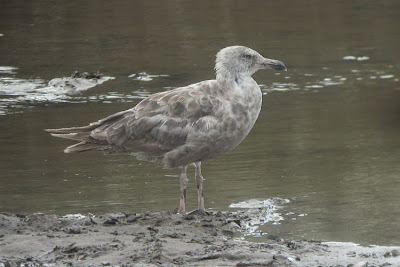 That was the first of four lifers on the trip for Marc, and he seemed understandably overwhelmed by it. We headed southwest towards Dingle in the hope that the recent system had deposited some nice early waders, but it hadn't. The pool at Ventry is looking shit hot and was covered in Dunlin, although Baile an Reannaigh continues to degrade each year and now looks absolutely rubbish.

Realising the Nearctic wader dream wasn't happening on Dingle, we decided to head back north to Barrow Harbour. Tide was in, no birds. Carrahane was a bit better, although wader numbers were not at the levels one would expect in a couple of weeks. This streaky-headed beast was present, though: 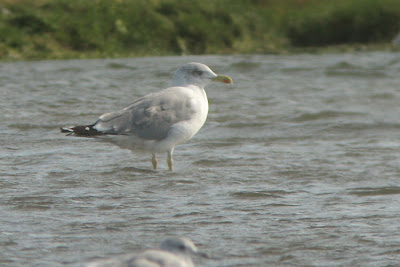 Interesting bird; not sure it's a true Azorean atlantis, but presumably from an Atlantic population. Note the extensive head streaking, starting to extend down the nape. It will be interesting to see how this develops in the next couple of weeks. We then got bored and went to Clare, via the Killimer ferry where there was an adult Med Gull. At Kilrush, this 4cy Glaucous Gull was the only bird at Cappa Pier. Nice. 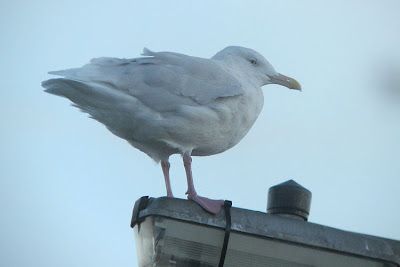 We then went to Bridges of Ross for a few days, saw a few seabirds including the aforementioned Fea's, but spent most of the time bored or in The Lighthouse. This was the first year the weather has been pleasant enough for me to seawatch for hours in flip flops and shorts. To be fair though, the Fea's was an absolute blinder in the close Manx line. Unfortunately, most present were gawping at a Sabine's Gull that went past just prior to the Fea's, and so it was only picked up very late. This meant that several members of the assembled crowd were at an angle where it would be too late to see it. Unfortunately, claims that suppression is going on by certain "satirical" members of the birding community have sprung up, although it was more to do with a bit of bad luck. The bird was called (loudly) pretty much instantly after being picked up. I was just lucky I was at an angle where viewed were most prolonged, and I thoroughly enjoyed all 15 or seconds of the bird before it went round the headland - Read was ecstatic.

By Tuesday afternoon, the weather had deteriorated to absolutely hopeless (no winds), so we seized the opportunity to head north to my favourite Irish county - Mayo. We scored the Snowy Owl on Termon Hill (Read's third lifer) on the Tuesday evening, and even found some memorabilia to take home. 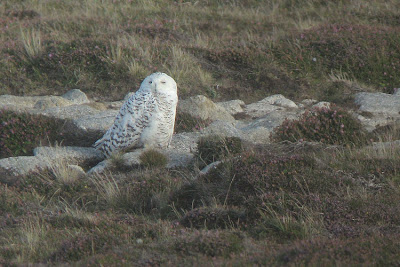 After a cracking meal in Belmullet, the night was spent at Dooniver, Achill Island. We awoke to a f**k load of midges biting us to pieces, and a few hybrid offspring before the boy - the drake Black Duck - swam into view at Sruhill Lough. An excellent bird (I really like Black Ducks), and great to see it has been spreading it's seed around the local ladies. Views were distant, and we decided to move on when it paddled out of view. On the way towards Doogort, Read suggested checking the lough just north of the road and east of the R319 crossroads. Just as I exclaimed that the lough looked "rubbish" and probably "never gets birds on it", we all caught sight of an aythya-shaped dark blob in the margin of the lake. We all raised out bins, and it appeared to have a rather arousing peaked crown. None of us actually said it at the time, but we were all thinking the same - rare. I cautiously suggested it looked like a Ring-necked Duck (although it was rather too distant to confirm with bins), so Read jumped out and 'scoped it. And it bloody was! The only bird there; wonder how long it's been around - if it had been October I'd have said not long but who knows at this early date. It did a bit of stretching, revealing that it did indeed have wings and so could feasibly have been a bird fresh in off the Atlantic, but who knows! 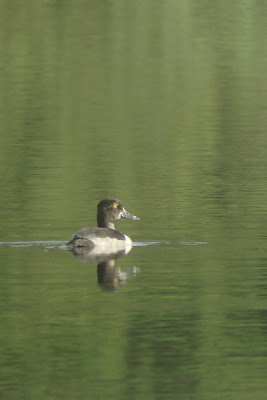 Then we went home via Sandymount Strand and a load of Roseate Terns.
Posted by Josh Jones at 19:03 No comments: