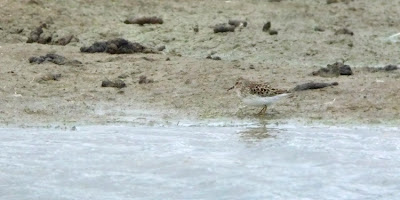 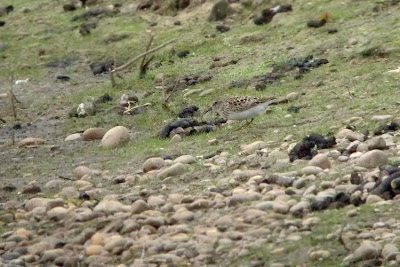 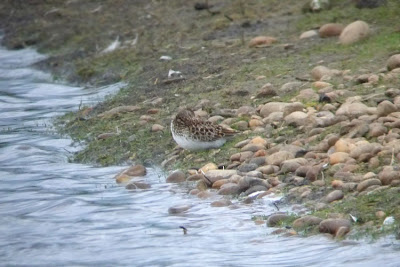 Splendid summer-plumaged Least Sandpiper at Old Moor yesterday evening (26th); originally identified as a Temminck's but, as can be seen from the photos, a bit better-looking than that. Showed well from the Wader Hide pretty much constantly, and is a long-awaited new British/WP bird for me!

Old Moor is only 14 miles from home in Sheffield but the roads/traffic make this place just a bit too far away to have as a regular patch - shame, lots of birds there this evening.
Posted by Josh Jones at 11:05 No comments:

An early start this morning (22nd) saw me leave Sheffield at around 03:30 with Filey being the destination (via York to pick up Staines). Collected him with some minor confusion in navigation through York, and were at Filey caravan site for around 05:30. We split up on arrival at Long Lane; not knowing exactly where the bird was, we decided it for the best. Staines went north towards the sea, and I headed south. A speculative scan around 50 yards down the path and - boom - there it was! An outrageously attractive male Rustic Bunting, scrotting around on the floor some 20 yards in front of me! Quick call to Staines saw him charging down the path to meet me, and we enjoyed some splendid views in perfect harmony, with no one else about. As my camera battery has died and the charger is in Lincolnshire, I borrowed Staines' Samsung for a record shot. In the poor early morning light this was as good as it got: 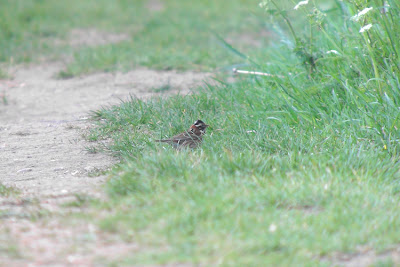 A gaudy bird that is not done justice by the picture; there are some nicer ones on BirdGuides.

Buoyed by an early success I forced Staines in to accompanying me to Easington - forgot how grim the drive is down the Holderness coast; the roads are crap! A nice enough (albeit blustery) walk down to the lagoons south of the caravan site at Easington saw us connect with the long-staying Tawny Pipit frequenting the sandy area between the two lagoons. It was nice to obtain extended views of this bird as it fed leisurely amongst the marram grass - the only other Tawny Pip I'd seen in the UK was a bird flying around over a field in Norfolk six years ago. There was also a Wheatear here, as well as a few Yellow Wags. Good movements of hirundines south (of all three species), as well as a few small flocks of peeps powering through and a Little Tern or two offshore.

Back in Sheffield by late morning. Tired now (revision is a bore hence I'm writing this), but well worth it. Great morning.
Posted by Josh Jones at 19:13 No comments:

Went for this very showy drake Lesser Scaup this afternoon on the small dam lake at Cuckney, Notts. Conditions were quite difficult for photography (water colour, reflections, in to the sun), but got some reasonable snaps: 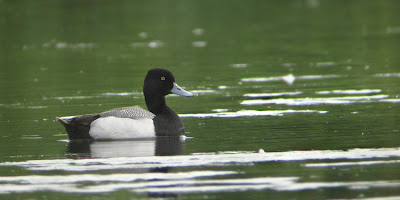 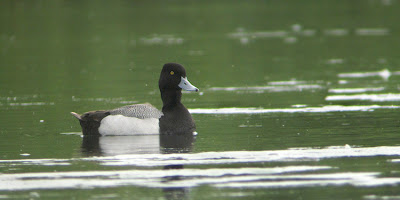 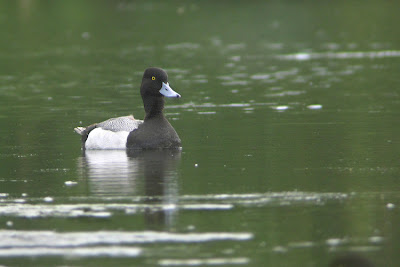 It's been a while since my last update, probably due to a lack of birding to be honest. Anyway, I was dragged out of the doldrums by a combination of a displaying Great Snipe at Cley and a very keen Oliver 'Staines' Metcalf, who seems to be charging round the country at the moment. So we headed down towards Norfolk from Sheffield around mid-afternoon on Thursday (12th), with the hope of connecting with the lekking beast.

A quick stop at the splendid Frampton Marsh RSPB (Lincs) produced the grotty male Red-necked Phalarope and a gang of six Temminck's Stints, which proved fairly difficult to pick up amongst the vegetation at times. There were also a few other waders, including small numbers of Dunlin, Greenshanks, Blackwits and a male Ruff in nice plumage. But time was pressing, and the ants in Staines' pants were calling for us to press on towards Cley.

Cutting a long story short, the experience was typically farsical. No bird, a load of tapes playing, and not alot of birds. Luckily, someone found a Lesser Yellowlegs on the pool next to Avocet Hide, so we traipsed round to West Bank and saw this bird in the fading light at some distance. Not a bad consolation, which was further backed up by singles of Spoonbill and Wood Sandpiper flying over. Got back to Sheffield about midnight.


Yesterday (15th), news broke of a male Citrine Wagtail at Conwy RSPB some time in the early afternoon. Realising that both Staines and Tim Jones 'needed' it, and the only Cit Wag I'd seen in the UK was a 1st-winter at Filey in September 2003, I rang up Ollie and organised a late afternoon jaunt to the northwest, as I was working until 15:30. So, eventually they arrived in Sheffield about 16:00 and, despite some pretty offensive traffic, we arrived at Conwy at about 18:30 with my Uncle Dave also now on board. Within five minutes, the wagtail was out and showing well (if a little distantly) along the far side of the pool. A splendid bird that brightened up a pretty grotty day for weather: 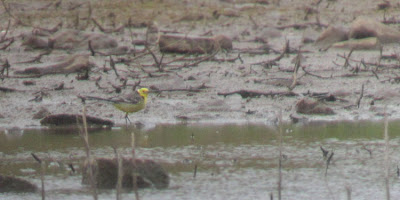 There wasn't alot else on the reserve save a White Wagtail and Little Ringed Plover, so we decided to head back towards England with enough light left to possibly plan a raid on one of two rare sandpipers in Cheshire. After dropping my Uncle back off in Hawarden, I was outvoted by my two low-listing passengers - I gave in and decided to give them a chance at the Broad-billed Sandpiper present on the foreshore at Meols, despite the odds seemingly stacked against us - tide coming in fast, light fading, and a lack of recent news. The journey up to Meols was pretty quick along the M53, and we pulled up along the seafront to find people staring at several incredibly skittish flocks of Dunlin. I decided it was a good time to tell the boys they had wasted my effort and there was 'no chance' of connecting - this reinforced when all the birds headed off west towards the lifeboat station.

We drove round there anyway, and found a good few thousand Dunlin. With a strong wind blowing 'scopes around combined with the ever-poorer light conditions, it seemed desperate. Nevertheless, I picked the bird up asleep and way off to the right at about the fourth scan, so we walked a couple of hundred yards or so down the promenade to obtain better views. This is basically what it looked like: 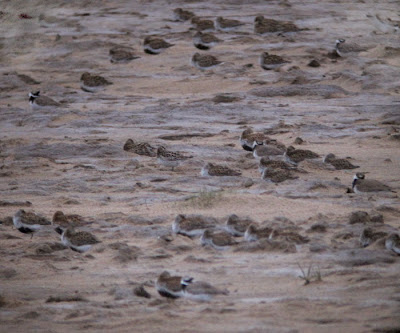 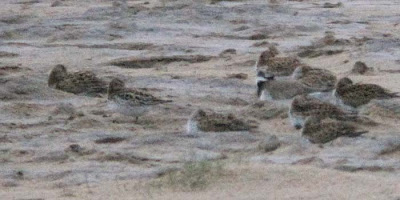 Staines and Tim did enjoy brief views of the bird with it's head out (necessary for a lifer of course!) although I was rather cold and ready to go, so had packed up by the time it decided to oblige. Nice easy drive home and was back in Sheffield for about half 10 last night, with two great birds 'in the bag'. Got to love a bit of twitching every now and again.
Posted by Josh Jones at 11:45 5 comments: