A quick lunchtime visit to Dogsthorpe Tip on Monday produced another juvenile Caspian Gull. This latest individual was particularly pale and distinct, despite scapular moult having only just commenced, and was also a massive bird. 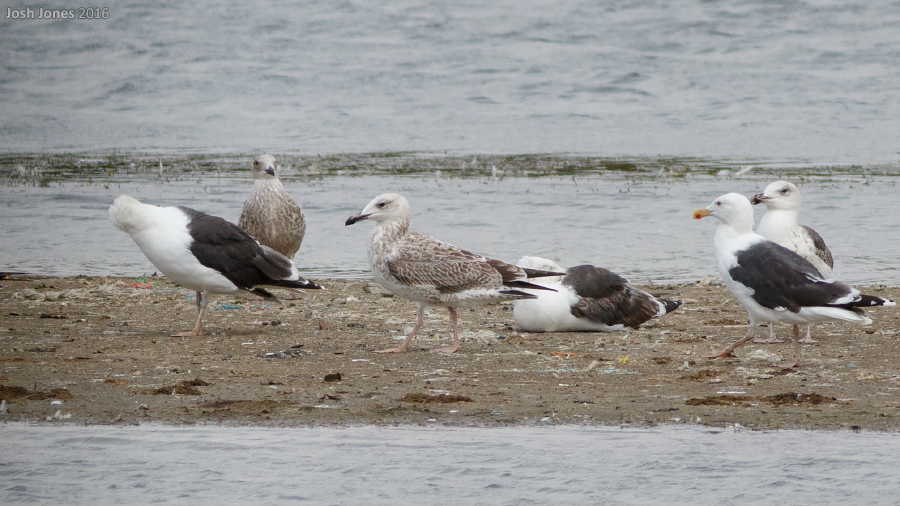 The pit here is pretty big and most of the gulls are out of range for the DSLR but birds on the spit show quite well. When gulls take off from the spit and head back to the tip to feed, they tend to fly quite close by - so the views can be quite good with luck. 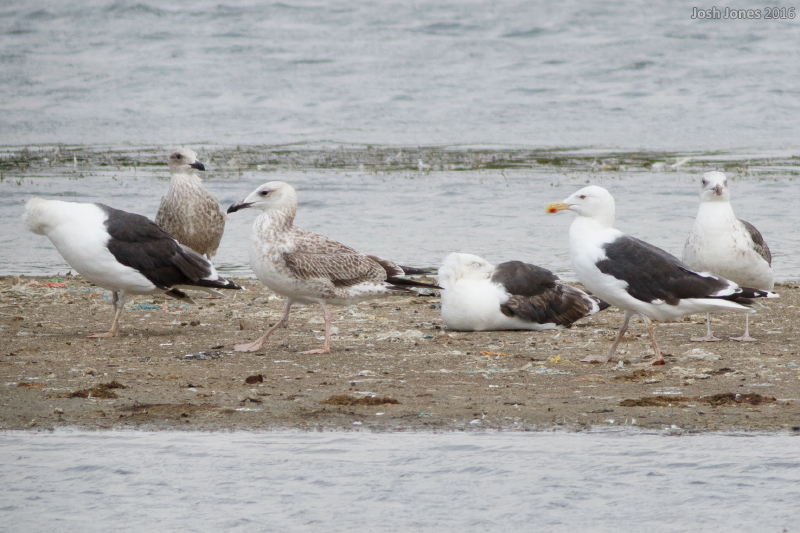 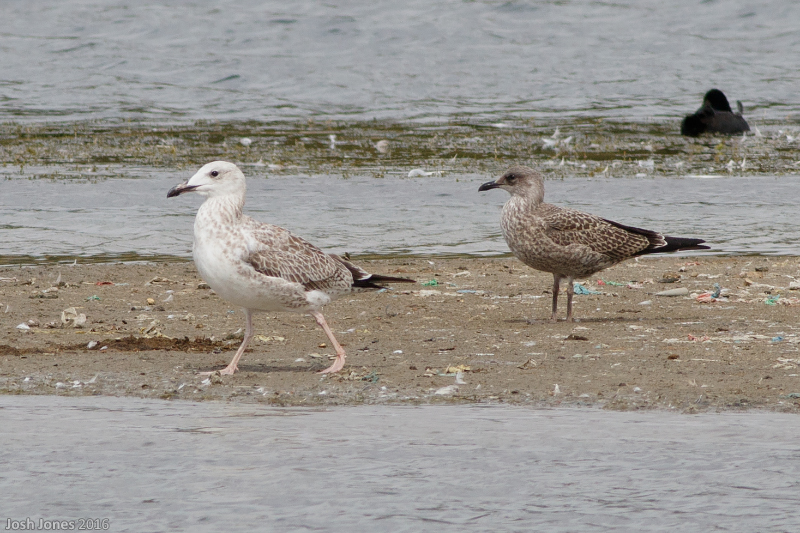 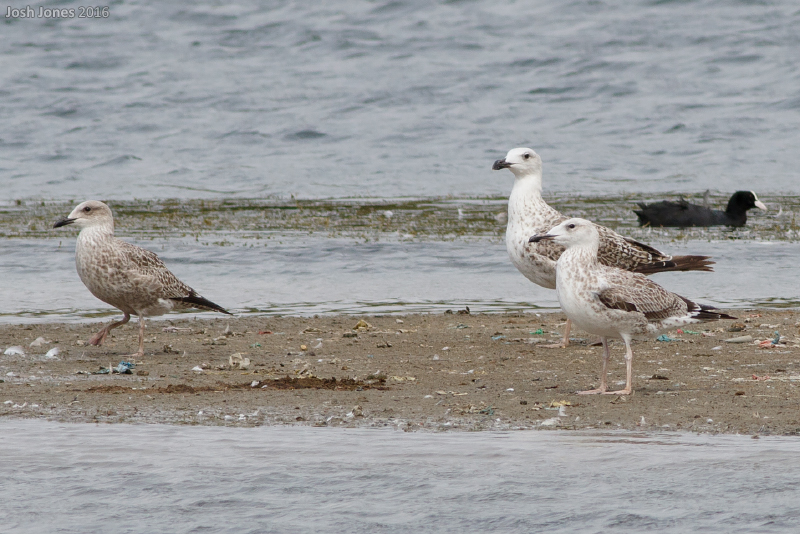 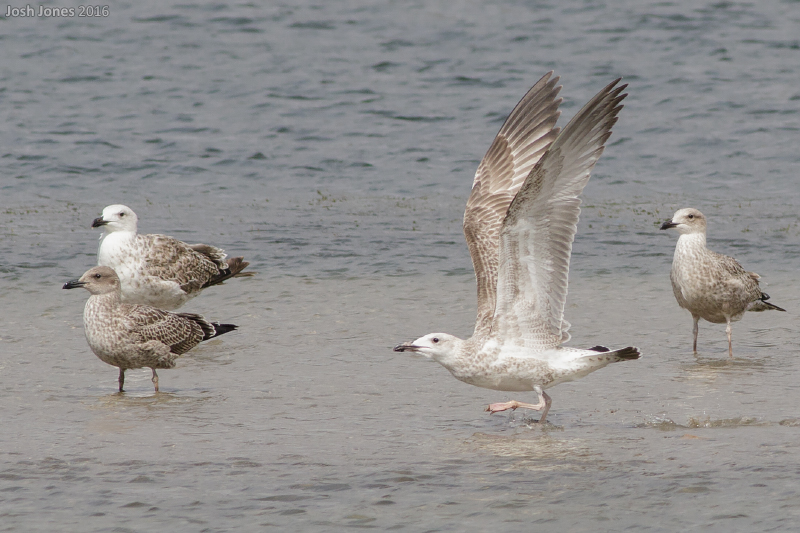 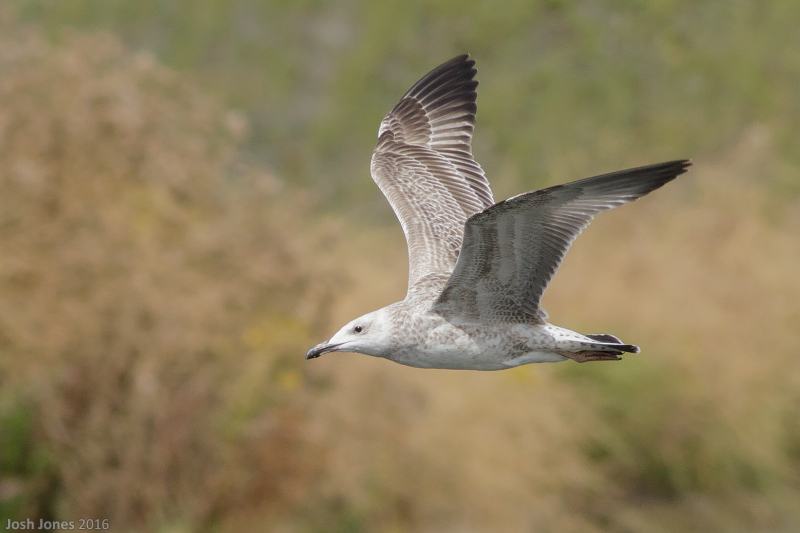 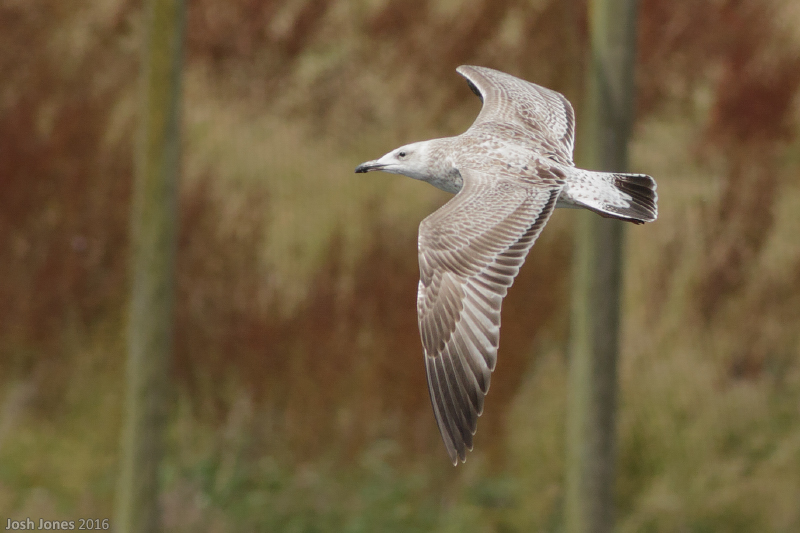 I'm back in Lincolnshire for Birdfair weekend and have been able to sneak in a couple of fairly brief sessions at Dogsthorpe Tip over the past two days - one on my way back home yesterday and one before work this morning. In total I've seen five Caspian Gulls: two 3cy and juvenile yesterday and then two of those birds plus a second juvenile and a near-adult (4cy) this morning.

Scope views of the pit are pretty good at present but both yesterday and today have been very warm, with an abundance of heat haze making photography difficult. It's a stretch for my 400mm lens to produce anything decent at the best of times here and so the efforts below are really just for documentation. Unfortunately the near-adult wasn't photographed despite doing a brilliant fly-past at about 30m range - I should have nailed it but my camera was on the wrong settings and so all I have are blurs.


Bird #1: juvenile, 17-18 August
I'm a bit sceptical about whether this is a pure Caspian Gull. Plumage is a little on the dark side - not out of range for a juvenile Casp but, when combined with the fairly Herring-like structure (quite big-headed and short-billed) plus quite heavily marked uppertail and undertail coverts, alarm bells sound. However it possesses the typical mouse-brown basal colour as well as the long, drooping lower tertials of a juvenile Casp and does kind of just look like one - if you don't stare too hard! The underwing is pretty pale, too, if not as pale as it can be in cachinnans. Perhaps it's from Germany. 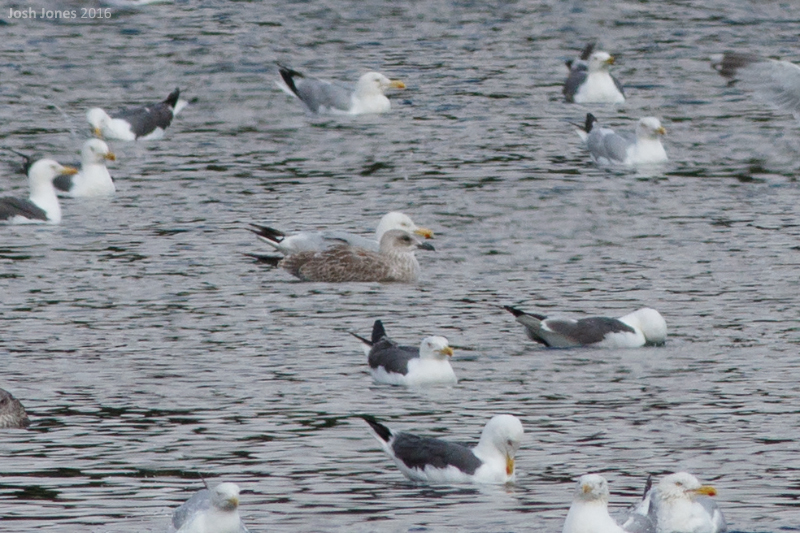 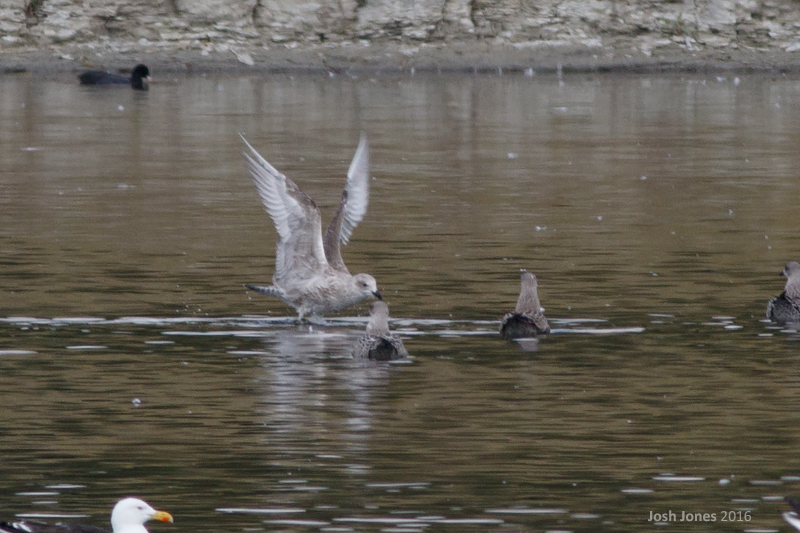 Bird #2: juvenile, 18 August
Unlike the other youngster, no doubt about this one! First shot is with the DSLR, second with my iPhone 5. 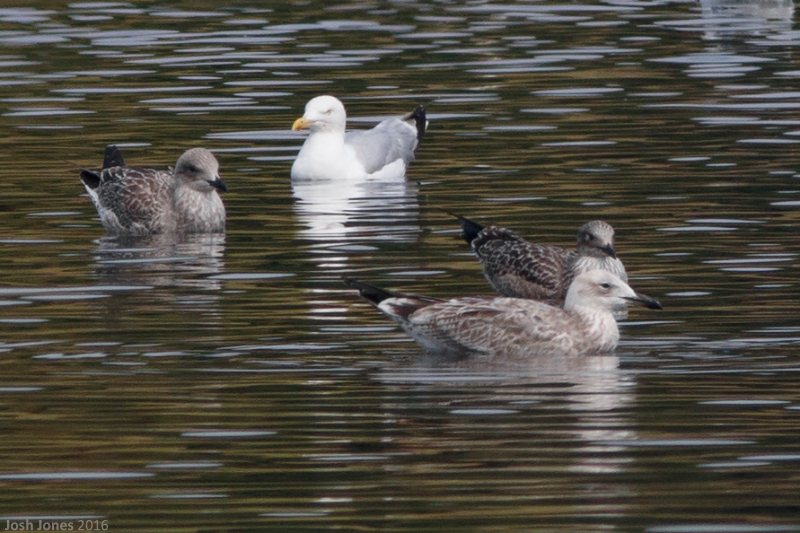 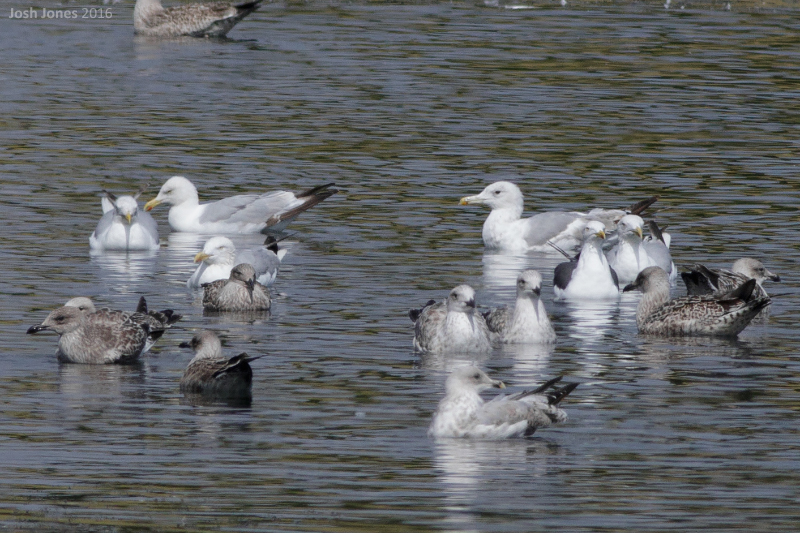 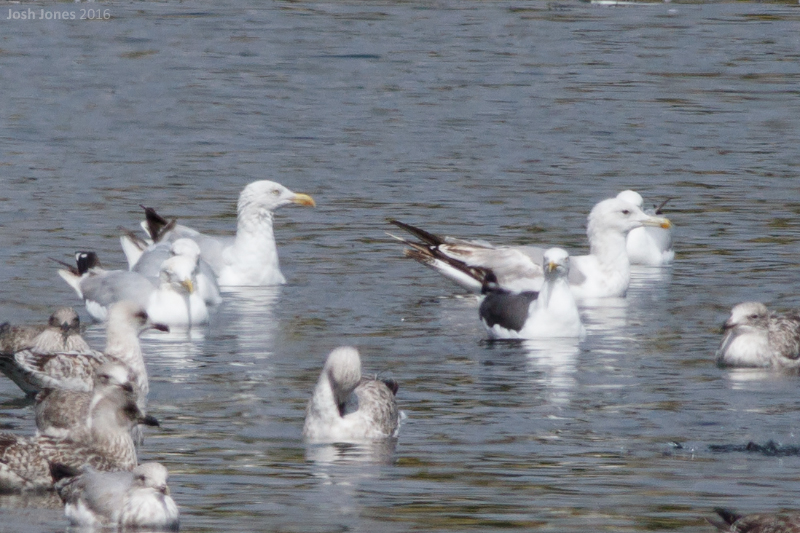 Bird #4: 3cy(?), 17-18 August
I didn't realise this was a different bird to the above until I reviewed images this evening! Present almost next to the other 3cy on 17th, hence the confusion. 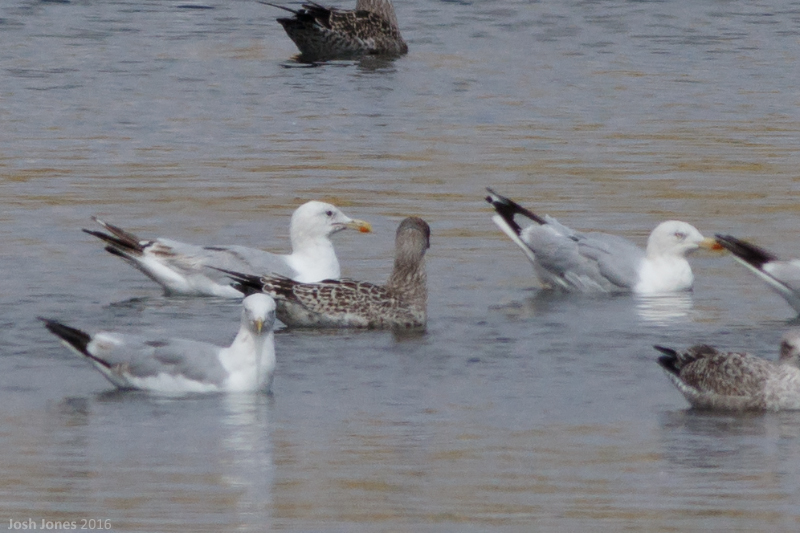 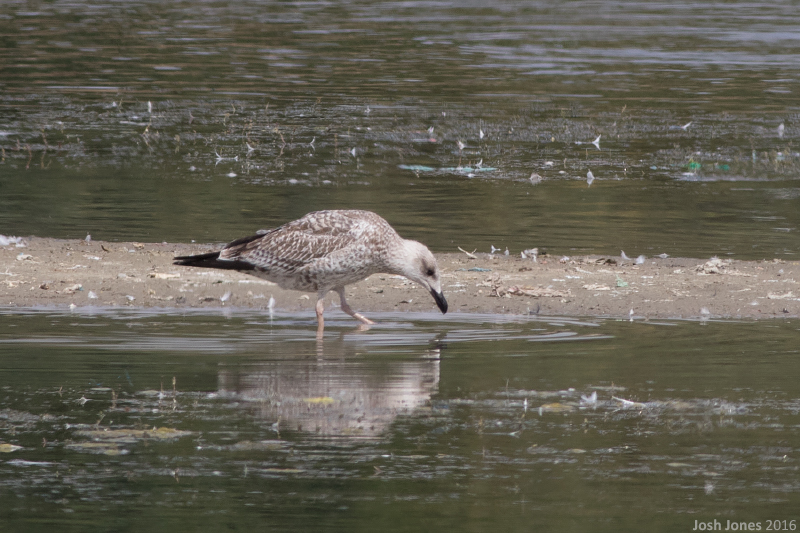 A quick visit to the River Thames by Chiswick Eyot at last knockings on Tuesday evening revealed two 2cy Yellow-legged Gulls among just 25 large gulls. I've been really impressed by the turnover of birds here; both of these are new individuals that I'd not seen before. The usual tactic of lobbing out a loaf of wholemeal brought them to within a few metres at times, but the light was too far gone for any flight shots. 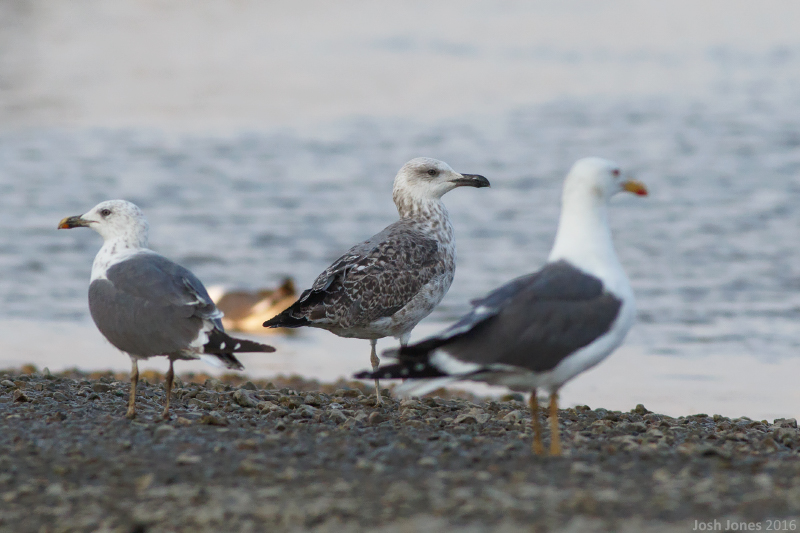 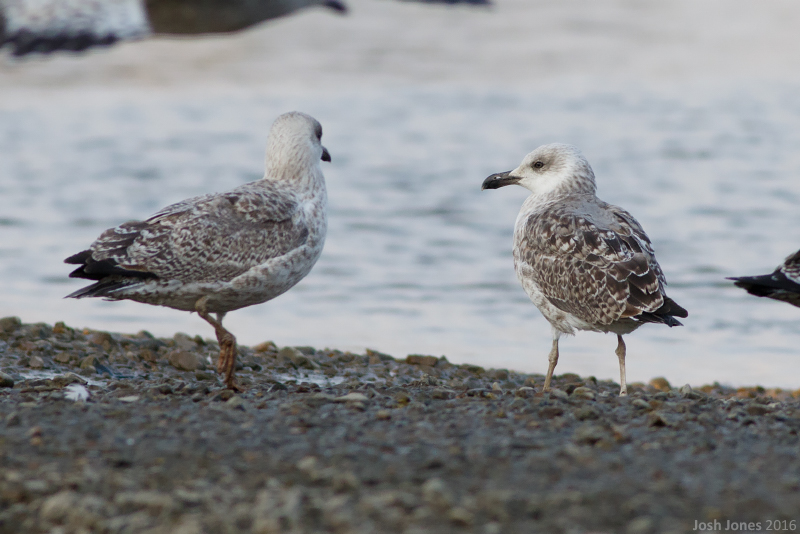 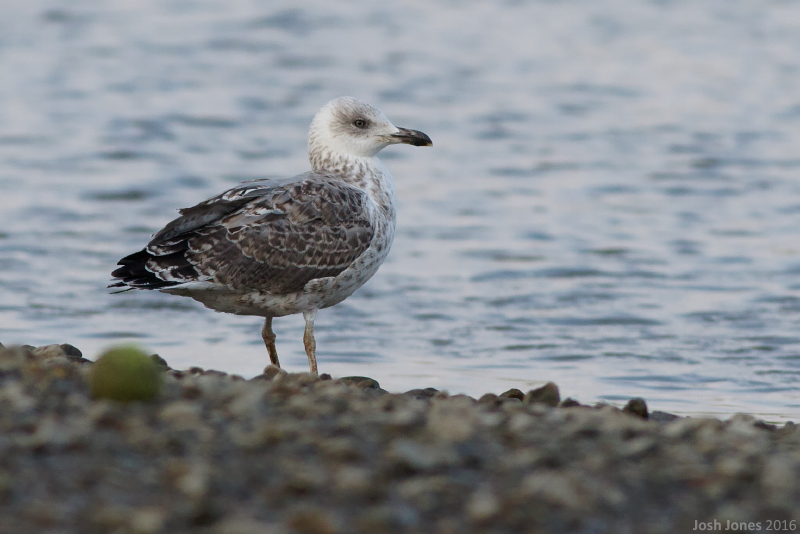 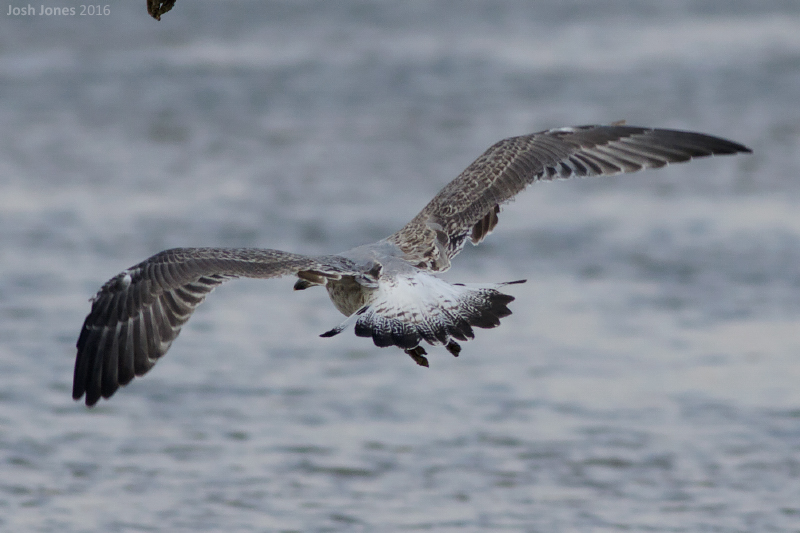 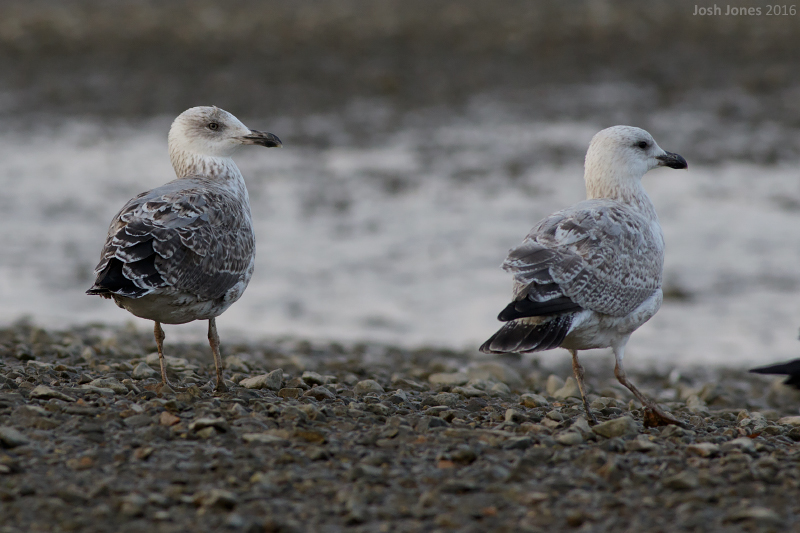 A short Thames gulling session around Chiswick Eyot on Monday lunchtime produced a juvenile Yellow-legged Gull among at least 110 large gulls. The michahellis was quite a dark and well-marked individual with scapular moult well under way, and clearly a different bird to that seen last week. I also had a juvenile on a brief pre-cricket visit on Sunday, but have no idea whether it's the same bird. 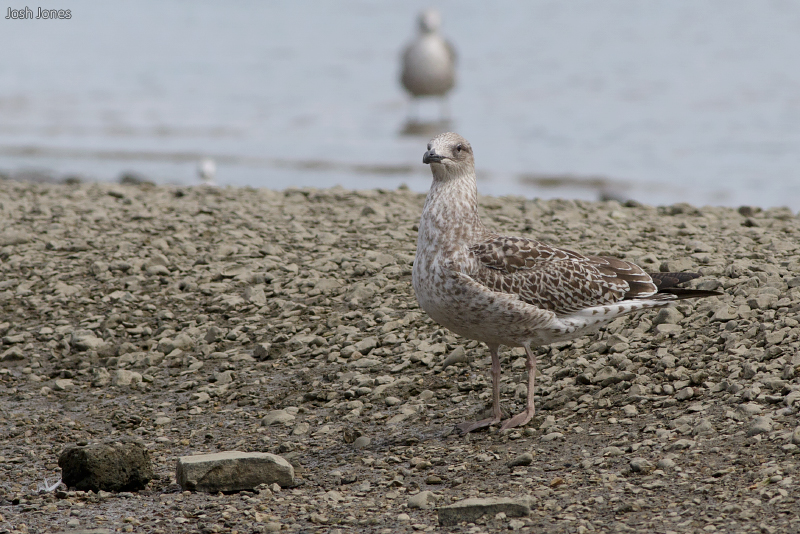 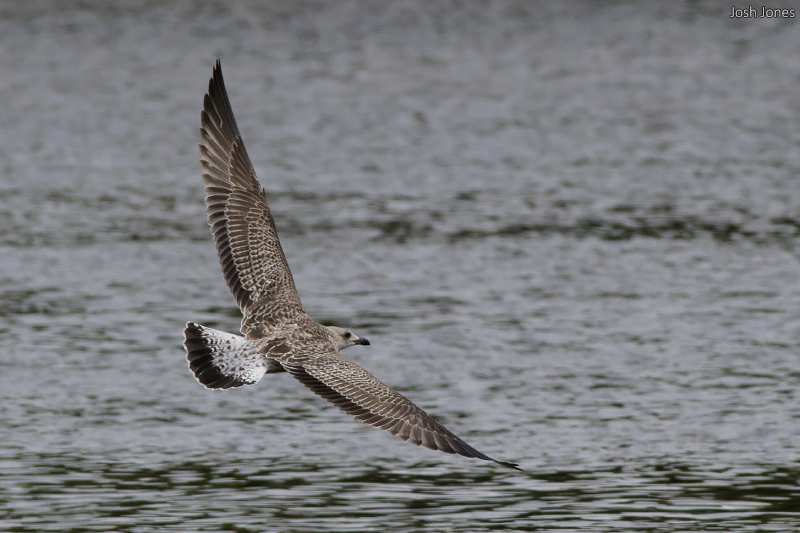 Arguably more interesting, though, was a blue-ringed 2cy Lesser Black-backed Gull. This is the first ringing recovery I've had over four visits in the past ten days, and nice for it not to be a red NTGG job! Suspicions that it was a Dutch bird were quickly confirmed by Roland-Jan Buijs - it was ringed as pullus on 13 June 2015 at Vlissingen-Oost, Zuid-Holland. This is the first time it's been seen anywhere since then. 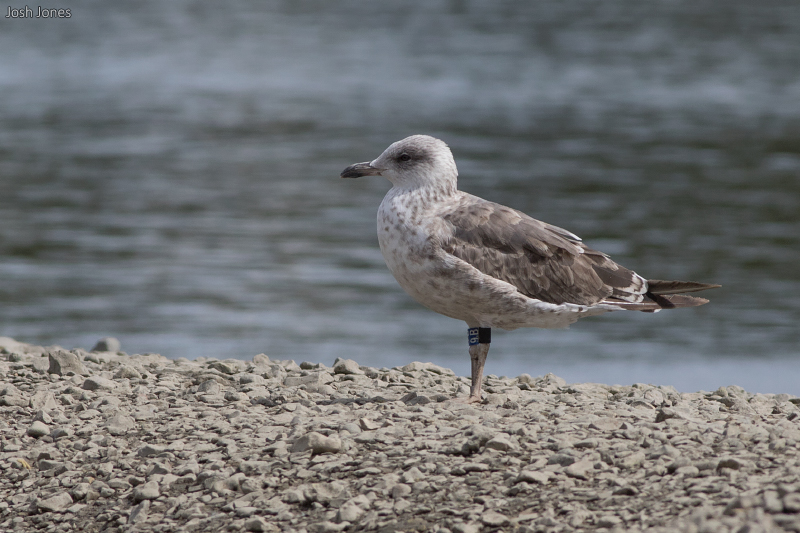 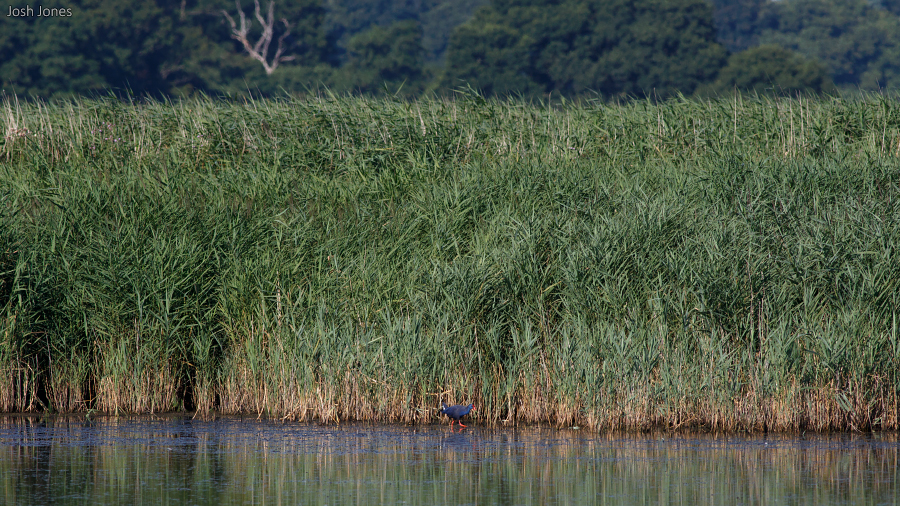 A Western Swamphen was found at Minsmere on Sunday 31 July. I didn't actually hear about the bird until the evening as I was playing cricket and didn't have my mobile to hand. As such I visited early on Monday morning, and enjoyed fine views for much of my stay from 07:45-10:30. That said, the bird was always over the far side of the pool and thus rarely any closer than about 100 metres.

In my (and many others') opinion, this bird meets all the criteria you'd hope for in a wild bird. An unusual northward dispersal has been occurring in France this year and it's easy to fit this bird in to the pattern observed there. You can read much more about this influx in an article by Hugo Touzé and myself on the BirdGuides website:


The bird's last showing at Minsmere came on Friday, resulting in a six-day stay. There has been no sign since. I'd argue that the relatively short stay is another factor in favour of this bird being wild - though the most northerly swamphen in France (in Morbihan) is still present at the time of writing, having been found back on 20 July. Others, further south in France, lingered for up to a week or so.

The jury's of course still out and it may be that some damning evidence comes to light that renders it unacceptable as a wild bird - though I doubt that'll be the case, and I suspect (hope) that it rightfully finds its way on to Category A. 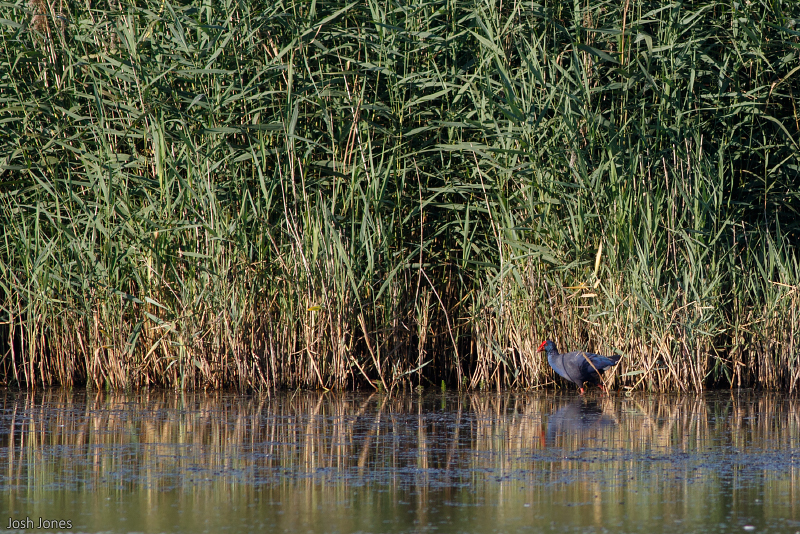 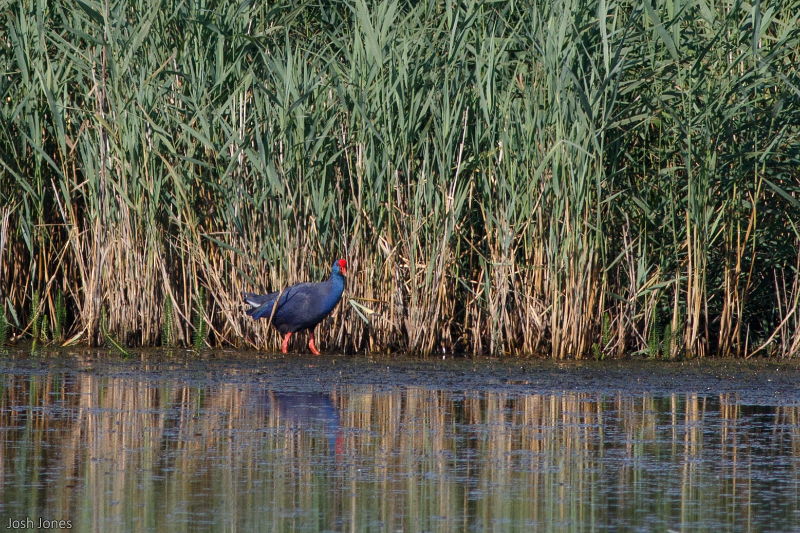