I still feel knackered after Birdfair - I woke up aching this morning - some sort of of delayed reaction to the toil of standing up all weekend. Is that normal at 23? This sounds all very clichéed, but it was genuinely great to catch up with lots of old friends as well as put names to many a face over the weekend - thanks to all those that came to (re-)introduce themselves at the BirdGuides/Birdwatch stand. Sadly, as I was the only BirdGuides representative over the weekend, I didn't get the free time that I'd have hoped to have a proper mooch around and catch up/meet many more. I also didn't find a Two-barred Crossbill, despite a reasonable amount of effort in various Northants woodlands. Still, a great weekend nonetheless.

I had yesterday morning off work - news shift from 15:30 meant I had a little bit of time to play with. The initial plan of a lie-in failed miserably due to our overexcitable springer spaniel, who thought nothing of charging up to my room and licking my face at half seven in the morning until I was forced from beneath the sheets. On the way back to London, I called in at my old gulling haunts in Peterborough. The hallowed turf of Dogsthorpe Tip was a sad sight - no tipping, the landfill capped off and, as a result, no gulls. Tears began to fill my eyes, so I hastily moved on. A marginally better situation at Tanholt saw just a couple of hundred LWHGs on the old pit. A welcome adult Yellow-legged Gull was one of the first birds scrutinized and, shortly afterwards, squinting directly in to the strong late morning sunshine, I clocked this rotter floating around (here portrayed during a cloudier moment): 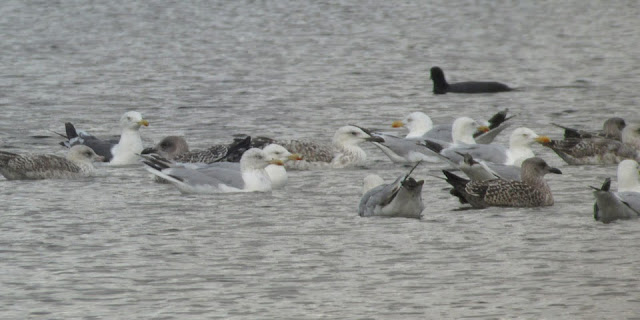 Though challenging in many instances, sometimes you come across Caspian Gulls that are refreshingly conspicuous. You've got a bunch of gulls in front of you, and the bird in question just sticks out like a proverbial sore thumb - a bit like this one. Not only is it a big old bird (approaching Great Black-backed size), but the white head contrasts with the long, dark bill to create a distinctive and contrasted appearance. Obvious Caspian Gulls have an immediately recognisable facial expression - snouty, with a small-looking eye. You then start moving down the body for more clues: the obvious shawl on the hindneck, the clean underparts, scapular pattern, largely dark brown tertials and, though not shown in the photographs, a clean white uppertail, undertail and rump, with sharply-defined black tail band. Compare it to the Herring of the same age just meandering in to view at the left-hand end of the photo above. Further ropey records, illustrating the features mentioned, are shown below: 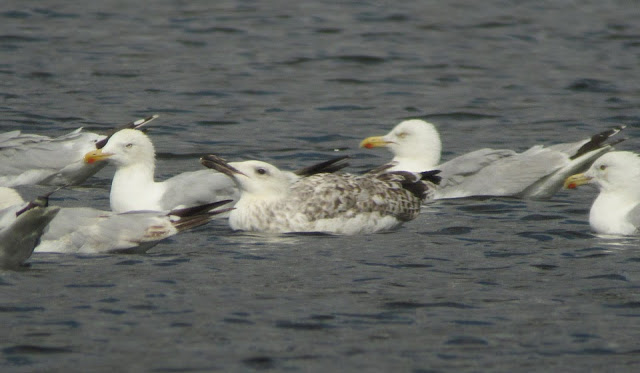 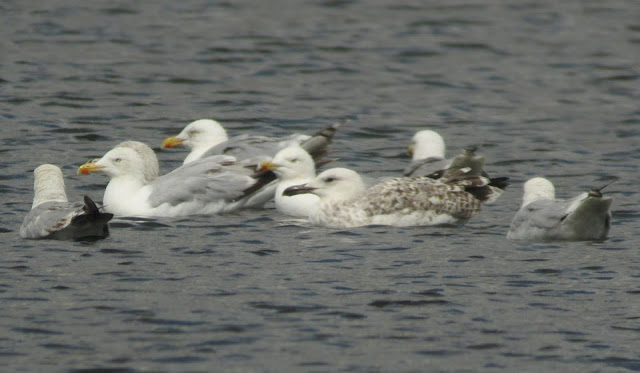 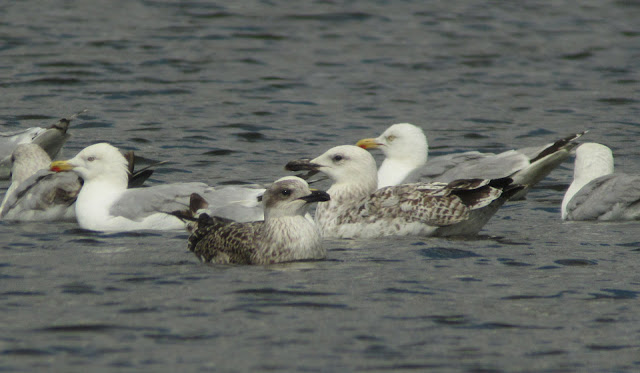 ... and dwarving the local Herrings and Lesser Black-backs - note how clean the undertail is.

Incidentally, this was the first bird that I've solely digiscoped in quite some time. It has demonstrated one thing: I desperately need a new tripod. I might as well have mounted my 'scope on a blancmange - the head is all over the place! Perhaps I should have shelled out at Birdfair after all...
Posted by Josh Jones at 17:06 1 comment: 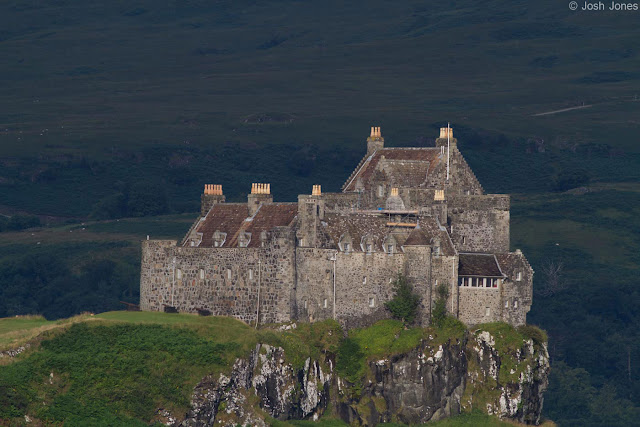 Duart Castle from the Oban-Craignure ferry

Just back from a weekend on Mull with Chris C and Ash H. Had great success on our chartered boat with the excellent Sea Life Surveys out of Tobermory on Saturday, connecting with about 15 Basking Sharks off the north side of Coll during the afternoon in addition to a couple of Minke Whales and a bunch of Harbour Porpoises. Birds included a few White-tailed Eagles, and a couple of Storm-petrels among more common seabirds. 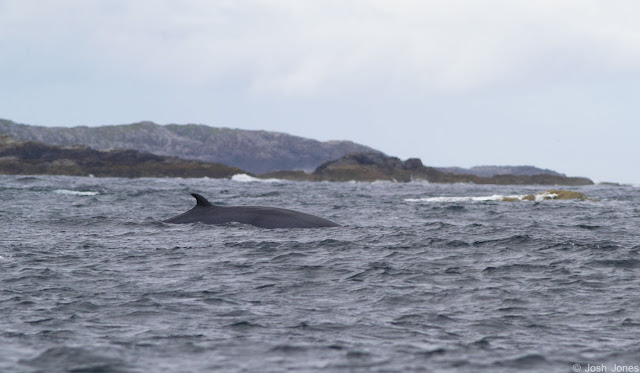 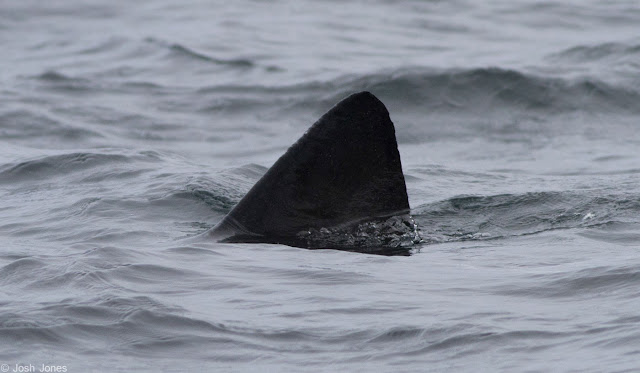 The real highlight, though, was getting to swim with the sharks. Though we were a little limited on time, we had some great passes - best for me was one animal cruising by within just a few metres (see images below). Unfortunately I only had my housemate's basic Go Pro to take photos/video with, so only managed a few blurry records and a short video of one animal making a more distant pass. A couple of photos (that's Ash in the first one): 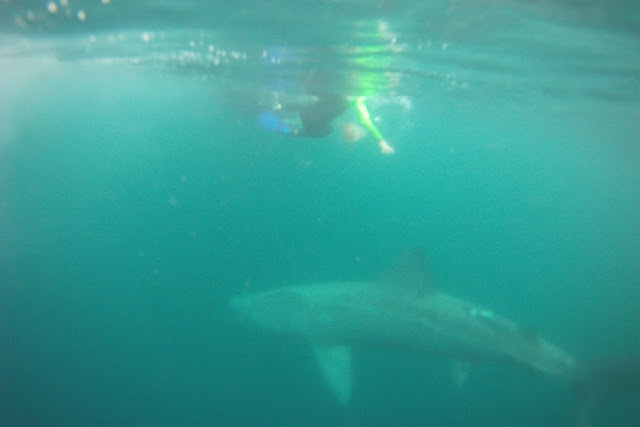 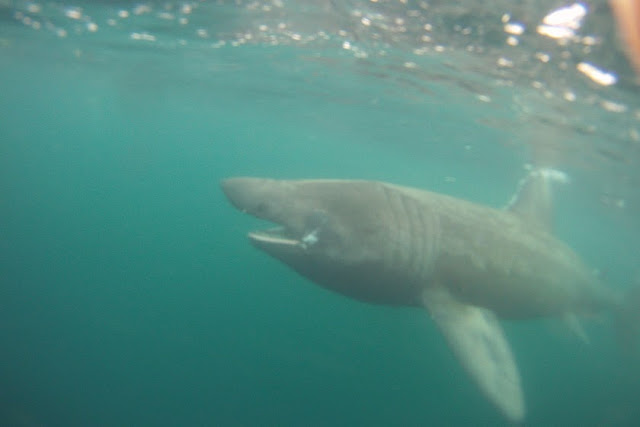 
Thanks very much to Ewan and all the rest of the team at Sea Life Surveys for a fantastic day out, and great to meet Sandy, Gus et al. on the boat. Here's hoping I'll be back next year!
Posted by Josh Jones at 09:54 No comments: 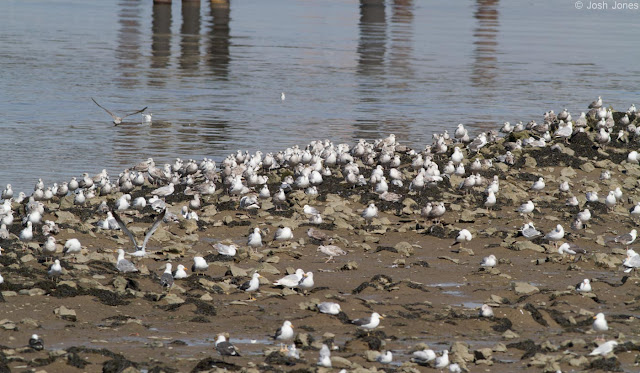 Spent a few hours at Rainham on Tuesday morning. It was sunny, warm and the tip was plagued with heat haze. That said, the gulls showed pretty well on the Thames foreshore opposite the area they are tipping (near the bend in the Thames). Try and spot a few michs in the shot above!

Overall, I had at least 35 Yellow-legged Gulls throughout the morning, with the commonest age classes being juveniles and adults. Among the juveniles was the dopey creature below, which spent much of its time on its own along the foreshore towards high tide and allowed for some reasonable photo opportunities. Nothing odd about the plumage (a classic, with scapular moult already well underway as you'd expect), but the pale bill gave it a really distinctive look. 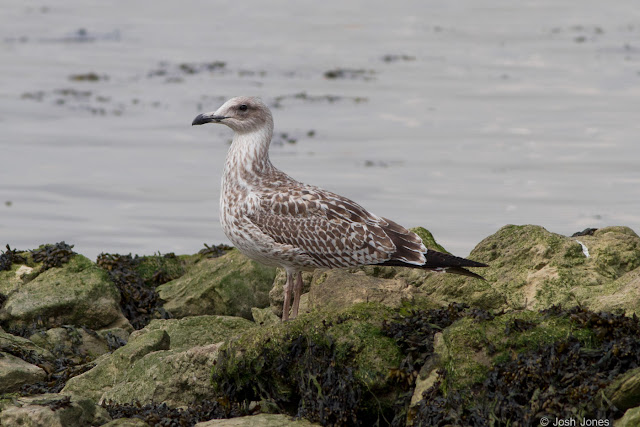 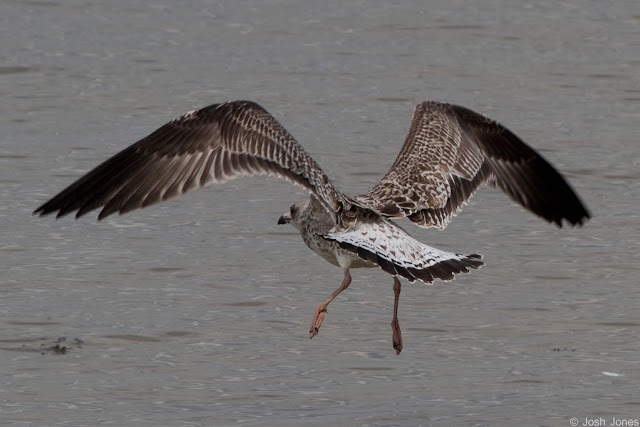 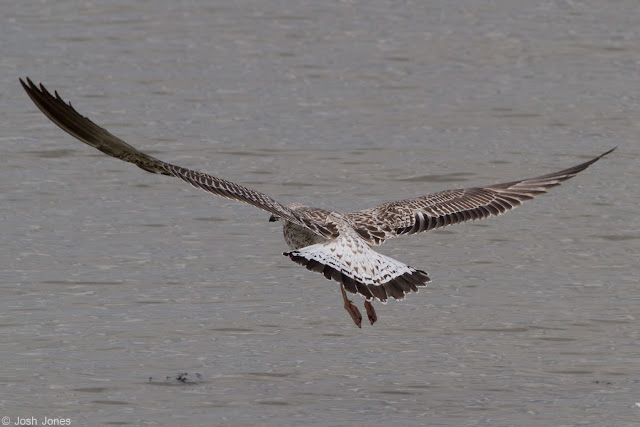 It was as long ago as February that I visited California with Rich Bonser and Lee Gregory, but I've finally managed to get the trip report processed. You can view and download below, as in the usual manner of my reports: