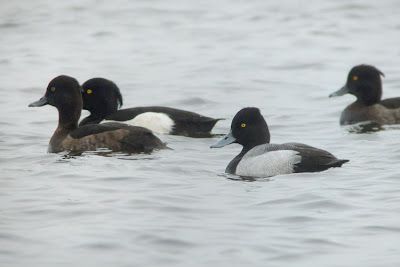 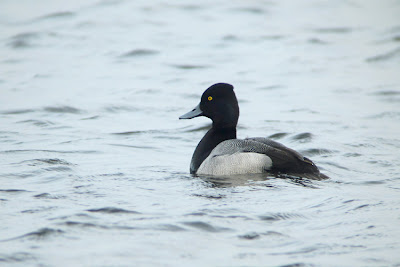 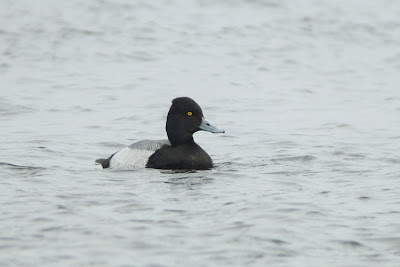 Caught up with this showy individual on a brief sojourn in to the Welsh capital on New Year's Eve on the way back from a grey and drizzly couple of days at my father's down at Kenfig. Not done alot else recently - been very busy and not seen alot hence no postings. Dipped the Lesser White-front on 28th but hope to get back for that very soon.
Posted by Josh Jones at 21:00 No comments:

For two weeks now, I have been teased by a juvenile Sharp-tailed Sandpiper in Somerset. However, I just haven't got round to going due to a lack of time - I've either been working, visiting friends, having a few beers (no driving) or simply sticking local. All this week, I had been planning a visit for this coming Saturday morning but, due to a friends' birthday in Sheffield on the Saturday, driving to Somerset then South Yorkshire didn't really appeal.

So, with a few hours free this morning, I decided to head down to Chew Valley Lake in the hope that the sandpiper had stuck overnight. I left South Lincs at around 04:45; slightly I later than planned as my car wouldn't start and I had t0 charge the battery for a bit. Arrived at Herriott's Bridge at around 08:15 via some slow traffic in Bristol and a McDonald's coffee. The target was not immediately apparent, although there were loads of birds scattered around Stratford Bay - especially ducks, including quite a few Pintail.

I headed round to Stratford Hide, where the Dunlin flock (c.40 of them) was immediately apparent. To my great relief, in amongst them was the Sharp-tailed Sandpiper. Although quite worn for a juvenile, it still sported a very attractive peachy breast, reddish cap and contrasting white supercilium. The white eyering was also prominent, as were the longer yellowish legs. Brilliant bird, but really frustrating - as my blurry shots below prove, the light was still very low whilst it showed well - just as the sun came out, the entire flock flew off towards Herriott's. 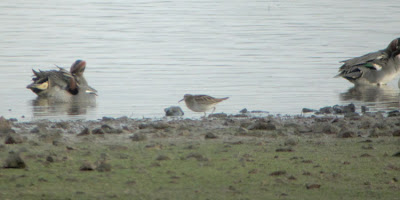 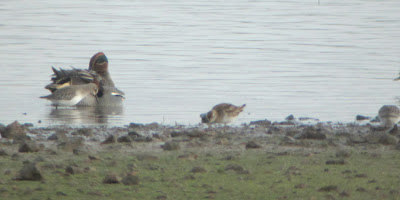 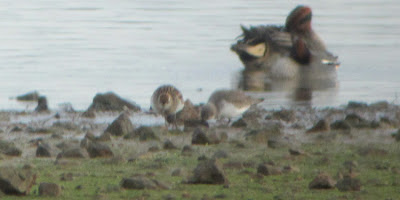 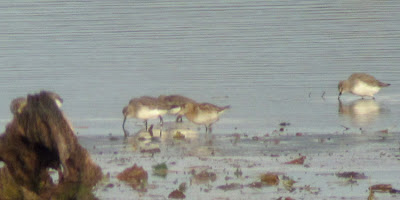 A scan to the right revealed three more roosting waders - the bigger bird was a single Black-tailed Godwit, but its smaller companions were my other targets - the two 1st-winter Long-billed Dowitchers. Amongst the throng of Teal present, I also had a female Garganey. Lovely stuff.

With the Sharp-tailed and its escort heading back towards Herriott's, I headed back round there to see what the views were like. Nice light with the sun behind me, but really quite distant - ample 'scope views, but definitely not as close as 150m as has been suggested elsewhere. A Water Pipit flew over me, calling quite a lot before disappearing somewhere on Herriott's Pool. The dowitchers also reappeared in the Dunlin flock; it was nice to see them awake and sewing. Then, more yankage - the adult Spotted Sandpiper was located showing well in the channel just below the weir by the bridge. Remarkable to see four Nearctic waders in such close proximity inland in December! 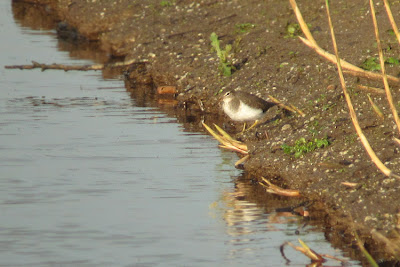 Spotted Sand chilling out in the December sunshine.

Time was not on my side today, so I soon headed off (some time shortly after 09:30). The journey back home was pretty smooth, and I was back in Langtoft for 12:45. A quick check of the patch this afternoon didn't reveal any wild geese, but 20 Little Egrets was a new site record.
Posted by Josh Jones at 19:58 No comments: