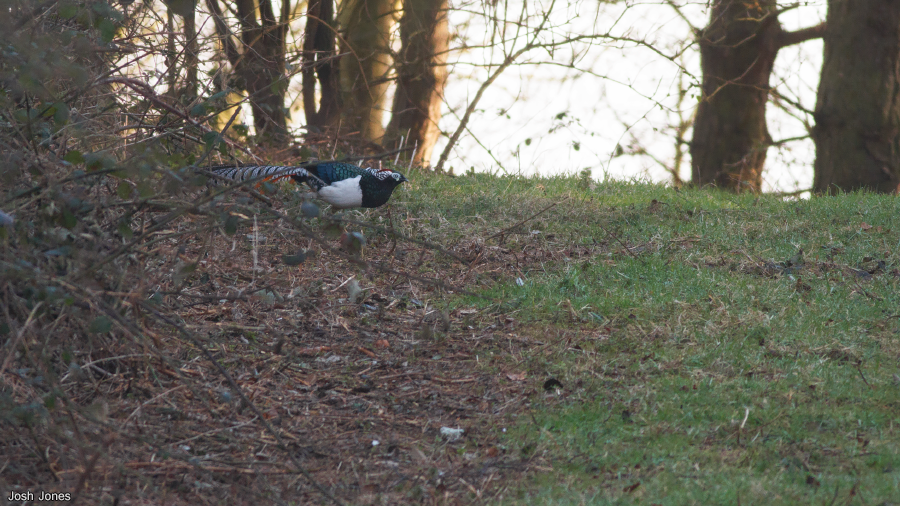 This stunning male Lady Amherst's Pheasant may (or may not) be the last of its kind remaining in the UK. The species has a fascinating history in Britain stretching back to the late 19th century, and its population peaked in the mid-20th century when it was said to number in to the hundreds across the Greensand Ridge in Bedfordshire and Buckinghamshire.

Increased predation due to a rise in the fox population, along with increases in the population of introduced Muntjac, are cited as likely causes of its subsequent decline. By the turn of the century numbers of Lady Amherst's were suspected to have dropped to a few tens and, by 2010, just a handful remained.

It seems that birds have persisted at just one site for the past few years. I first encountered birds here in 2011, when at least three could be heard calling. It seems that these have now dwindled to just the one... I guess it could theoretically be almost as old as I am!

It's an incredibly wary bird and tends to show for just seconds at a time. Quite where it shows is unpredictable (it's been seen in several spots) though it had been favouring a certain ride in early March, and was apparently seen again there this morning (28 March). 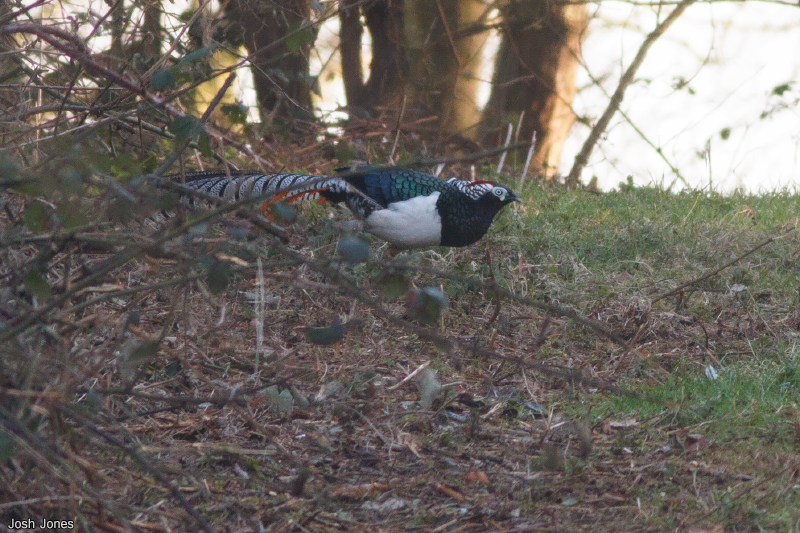 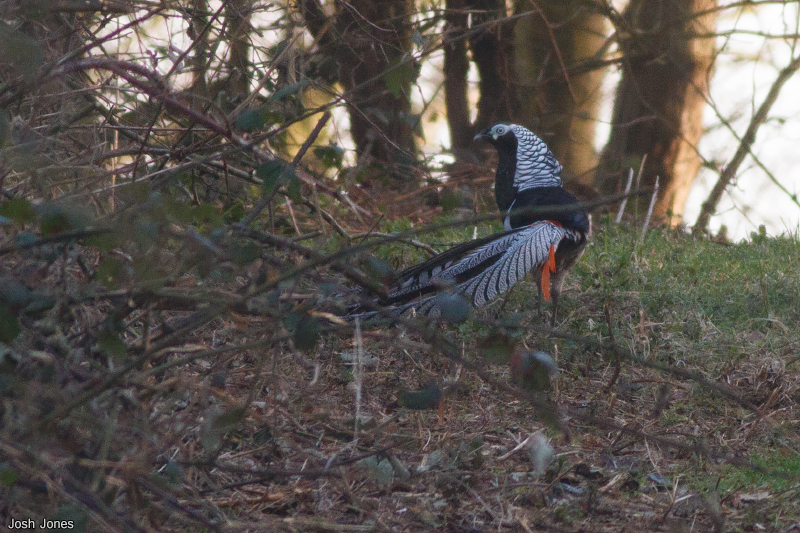 I've just had a most enjoyable weekend on the near-continent in the company of James Shergold and Harry Murphy. Our quarry was a mixed bag of distasteful introduced species and some altogether more appealing Continental specialities. On paper, I guess you'd have to say that the highlight of the weekend was the wintering Wallcreeper in Dinant, Belgium - after a fair old wait, we were treated to some excellent views of this brilliant bird as it alternated between the cliffs and the Palais de Justice. At one point, it even disappeared under the eves for as long as ten minutes before resurfacing! After seeing Wallcreeper at about a mile's range at Les Baux last March, it was great to finally see the species well.

I suppose I shouldn't be admitting to this, but I did get just as much of a buzz out of some of the introduced birds seen over the weekend. Our first stop on Saturday morning was Forêt d'Hesdin, where about a dozen Reeves's Pheasants were seen. Most were females, like this one: 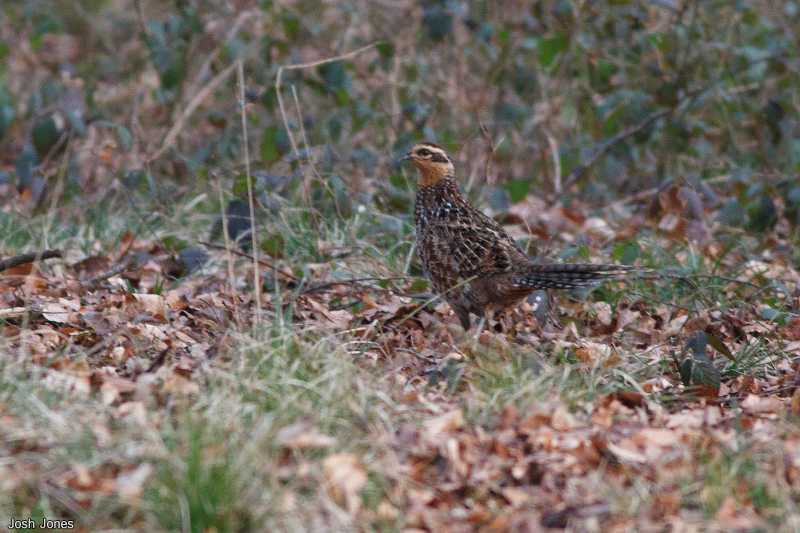 We did see a couple of absolutely glorious males, including this one which briefly posed well for photos before scampering off in to the forest...

With the pheasant and Wallcreeper safely in the bag by mid-afternoon on Saturday, we decided to try a few woodlands in southern Belgium in the hope that we might be able to turf out Middle Spotted Woodpecker. And that we did without too much difficulty thanks to James' sharp eyes - a tick for Harry, as was Short-toed Treecreeper.

A successful first day was capped off with a few beers and fantastic tapas in a hotel near Utrecht. Leaving Harry - a testosterone-fuelled teen - to head off in to the night in search of local Dutch girls, James and I retired to the room for a good night's sleep - very much needed after a long day. Fortunately Harry returned in one piece, and was even up for our early start. Heading over to the east side of Utrecht, we met up with Thierry Jansen and friend who kindly showed us to a Black Woodpecker territory. It didn't take long before we were treated to good views of a male set to the backdrop of overflying White-fronted Geese and singing Woodlarks. Not a bad start to the day!

After this it was a case of 'eyes on the prize' as we re-focussed on two introduced species - Bar-headed Goose and Black Swan. The former was easily encountered near Culemborg while a pair of the latter were seen not far from Vianen, a third swan later seen in fields near Strijen.

Fortunately these were interspersed with more recognisable quality - namely a flock of Lesser White-fronted and many hundreds (thousands) of both European White-fronted and Barnacle Geese, plus Goshawk, Merlin, Med Gulls, Hawfinches and plenty more besides.

After dipping the Long-legged Buzzard at Maasvlakte we began the long drive south, calling in for these boys on the way - the less said about them, the better. 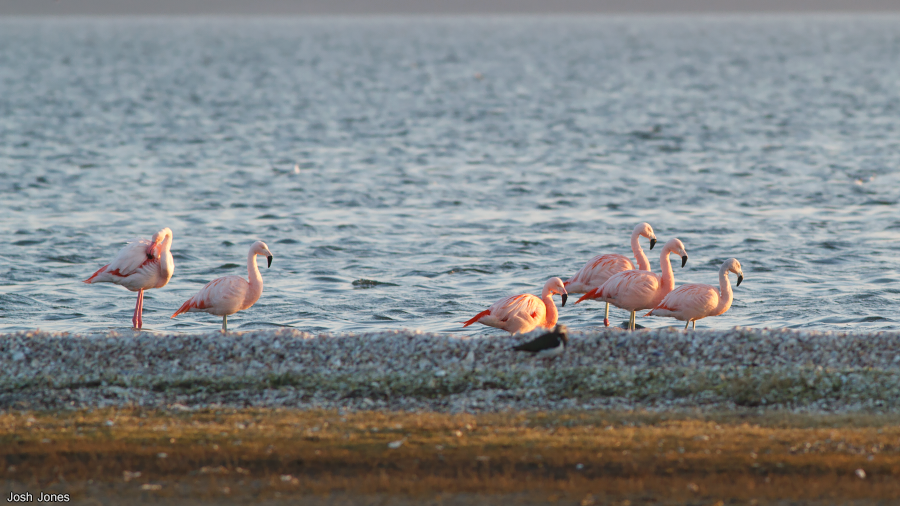 And so that rounded off a fine weekend on the European mainland. It was an excellent reminder of how much better birding can be just across the Channel and, even with the Cat Cs now safely planted on my Western Palearctic list, I'd happily return and do it all again. Very much cheap and cheerful, with some great birds to boot. It's my intention to produce a fuller trip report with GPS for some of the more interesting species (Reeves's, woodpeckers etc) in the coming weeks, so watch out for that.
Posted by Josh Jones at 23:29 1 comment: