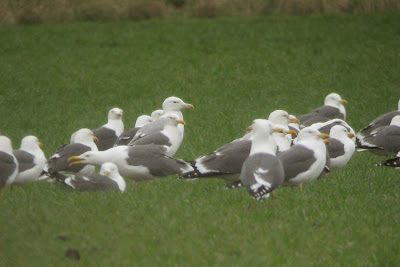 This adult Caspian Gull was in fields just south of Dogsthorpe Tip this afternoon, along with two Yellow-legged Gulls. Earlier in the day I attempted a return trip to Suffolk but bailed at Huntingdon on negative news, so went and saw the female Two-barred Crossbill at The Lodge, Sandy (Beds) instead. Off to Ireland tonight, so I guess thats my chance of seeing the kestrel gone...
Posted by Josh Jones at 17:12 No comments:

Today was primarily focussed around having a second shot (this time with my wallet) at getting to Norfolk and seeing some Alpine Swifts. On hearing that both were still present, I got on the road at about 09:00, with first stop being the patch. Around 40 Lesser Redpolls were still being a nightmare to view properly, although the New Workings was much more satsfying - 5+ LRPs, 2 Ringed Plovers, Redshank and 2 Oystercatchers provided a nice selection of typical summering waders, with the star of the show being a single Dunlin there. Dunlin always seem to be good indicators of the quality of a site, so this early showing bodes well for the rest of the spring. Just a shame I will be in Sheffield really!

Battling through hordes of old people driving at ridiculously low speeds, I reached Hunstanton by around 10:45. Needless to say, the Alpine Swift had done one and it was not long before I was back on the road and heading for Cromer. Slow drivers were present in even higher densities along the A149 making for a torrid and stressful journey. As I drove through Sheringham, it suddenly occurred to me to go and have a look for the juvenile Glaucous Gull which has been wintering on the seafront. No sign of the Glauc, but I had a bit of a surprise when this 2nd-winter Caspian Gull appeared just offshore: 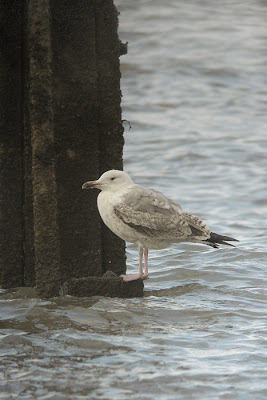 When you are so used to seeing Caspian Gulls loafing on rubbish dumps or miles away on reservoirs somewhere in the English Midlands, the Sheringham bird seemed a little out of context - indeed, it is the first of its' kind I have seen in a coastal setting. A splendid brute of an individual, it was consistently aggressive towards the local Herring Gulls, and preferred a perch at the eastern end of the seafront. Whilst watching the beast a couple of other birders arrived, informing me that the Alpine Swift was still showing on and off near the lighthouse at Cromer. So, off I went and, after a short walk up to the lighthouse, there it was: 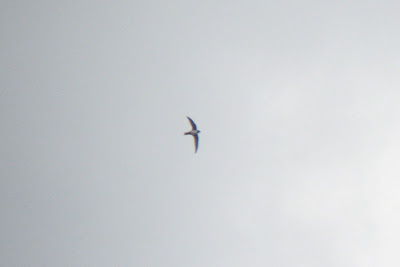 This is only my second Alpine Swift in the UK, following a bird at Hampstead Heath in April 2006.

With little time to spare, I reluctantly left the bird and headed home for work. Overall, despite all the morons driving at moronic speeds across the county, it had turned out to be a fairly successful day. Big plans for next week, so watch this space - I'm hoping there will be something to write home about.
Posted by Josh Jones at 22:58 No comments:

So, my blog hasn't been up date for some months, reflecting my complete lack of enthusiasm for anything birdy over the winter. I haven't twitched one bird (until today), and have only been birding once or twice since before Christmas. As it is now the Easter holidays, I thought it would be time to put that right.

First port of call today was the patch. Soon after getting out the car near the Old Wader Scrape pull-in, I heard a few excitable redpolls, but didn't manage to get on to them (I was a bit rusty first off). A scan of the skies produced a number of Sand Martins blogging about, before the redpolls began to distract me again. This time, I got on to a flock of about 10 making for the alder stands just west of ARC Pit, so headed over there to see if I could sniff out some better views.
Over the next hour or so, it became apparent that a good number of Lesser Redpolls were present (some 30+, with small flocks coming and going all the time), and a number of males were singing and generally getting a bit rowdy. However, the wind wasn't making things easy, and the birds were tending to bury themselves deep in bushes. Nevertheless, a female-type Mealy Redpoll was located: 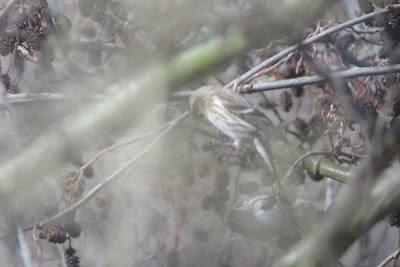 Mealy Redpoll - BLGP seems to be a reliable site for this species in most winters, even in poor redpoll years.

As I watched the redpolls, a Willow Warbler burst into song providing a nice seasonal contrast - one of (if not equalling) my earliest dates for the species. There were a few other mildly interesting bits about, including two Little Ringed Plovers, a few Shelducks, 11 remaining Goldeneye and quite a few Common Gulls. Standard late March fayre really...

On arriving home it transpired the Alpine Swift was still at Hunstanton, so I set off that way. By the time I got near King's Lynn, petrol was running low. Unfortunately, I had forgotten to pick up my wallet (and so had no way of paying for petrol), resulting in a miserable drive home instead of continuing the extra 15 miles to Sunny Hunny. An excellent reintroduction to twitching then.
Posted by Josh Jones at 14:30 No comments: