A weekend in the Peterborough area

I took advantage of meetings up in Lincolnshire to spend a weekend at home - primarily to see family but also cram in some birding, too. In short, I've never seen so many birders locally! The now-famous Bluethroat at Willow Tree Fen has been drawing large crowds ever since it turned up and I joined them on a few occasions. Unfortunately, feeding this bird mealworms has only made it more elusive - now it doesn't need to forage, it pops out on the footpath to pick up a snack every half-hour or so, grabs one and heads back to the reeds almost right away. Still, a very nice bird to see so close to my old stomping ground, and in February..! 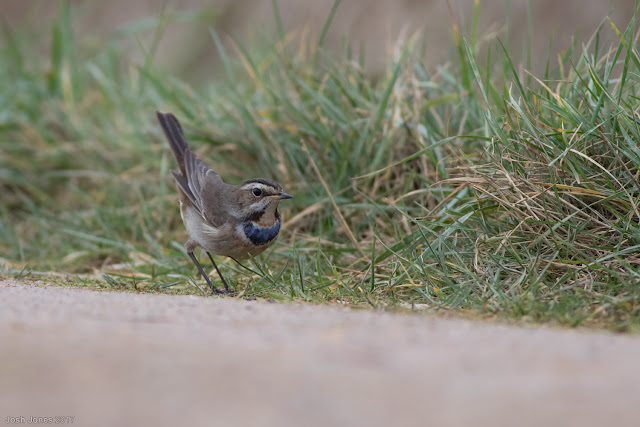 I'm not sure if it's because I've become accustomed to the largely bird-less expanses of Central London, but my old patch at Baston & Langtoft Pits seemed really 'birdy' on each visit. Most rewarding was a pair of Grey Partridges, a species I almost never see these days and one I've not seen at Langtoft in many years. Presumably reintroduced stock, but fantastic nonetheless. Up to 35 Yellowhammers and 10 Corn Buntings (but no Pine) was also nice, as were stunning views of a hunting Barn Owl one evening. Good numbers of wildfowl included hundreds of Wigeon, a Pink-footed Goose among the Greylags and a fine adult Whooper Swan among the Mutes. Returning shorebirds included an impressive count of 10 Oystercatchers. 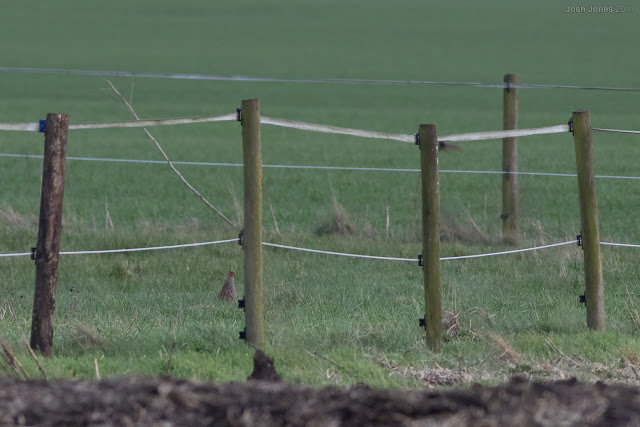 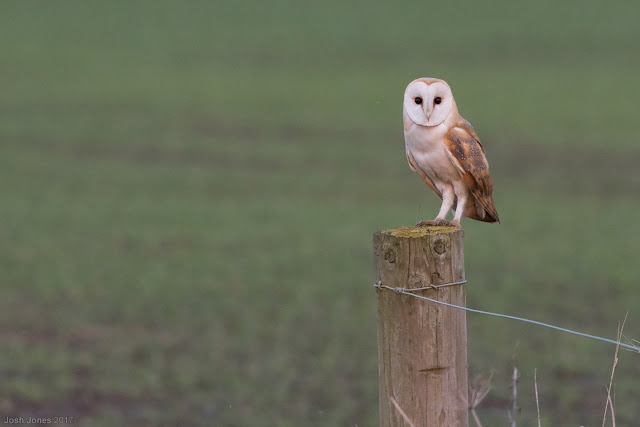 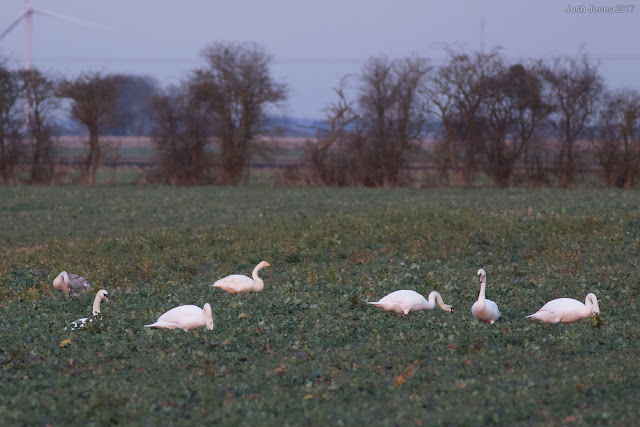 Of course no trip back 'home' would be complete without paying homage to Peterborough's gulls, and it was nice to find a second-winter Iceland Gull at Dogsthorpe Tip, as well as an imposing first-winter Caspian Gull. Large gull numbers were in general quite healthy, with perhaps 3,000 or so of the three commoner species (~ 90 per cent Herring) at Dogsthorpe. 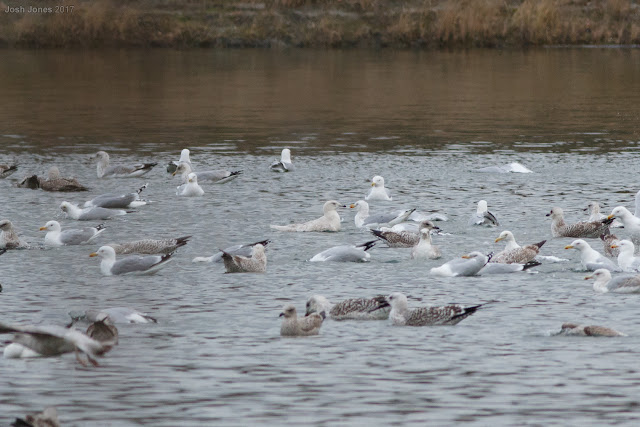 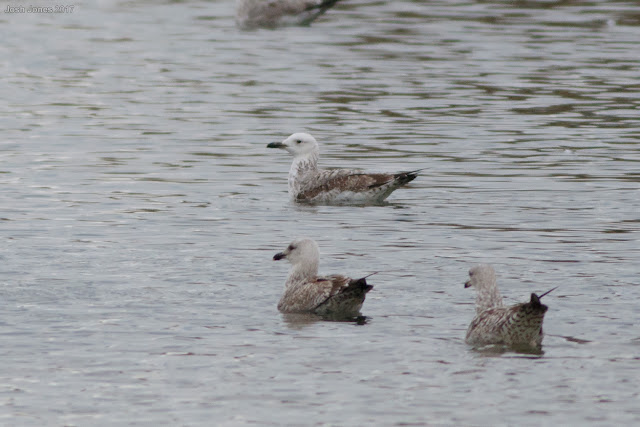 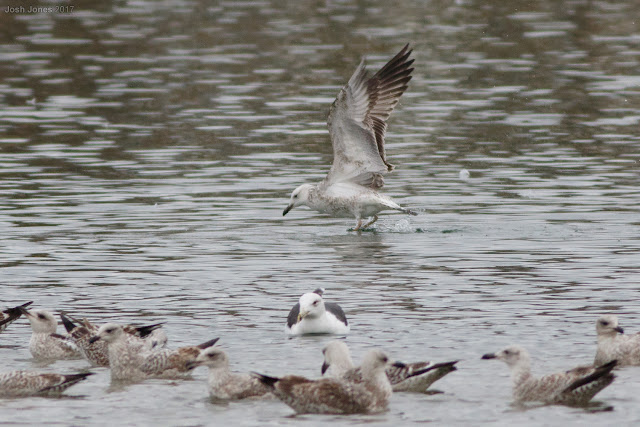 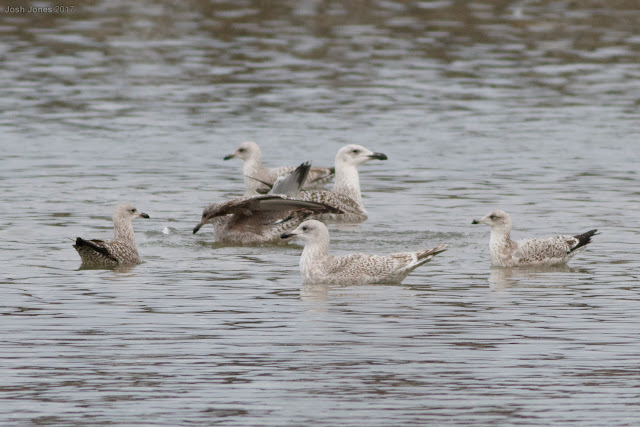 Pale Herring Gull
Posted by Josh Jones at 22:00 No comments:

A familiar Yellow-legged Gull and hints of spring

It felt almost springlike out of the wind today, and fittingly I saw my first butterfly of the year - a Red Admiral hurriedly commuting between riverside gardens adjacent to Chiswick Eyot. Poor thing must've been chilly.

With cloudless skies and temperatures having recovered somewhat from the weekend, it felt like a decent day to be looking skyward and so it proved. A Common Buzzard headed south over London Wetland Centre at height at 11:49 and a little later, a Red Kite drifted low west over the Thames and then the Harrods Furniture Depository at 12:06. Both new species for the year, the latter the first I've seen here. 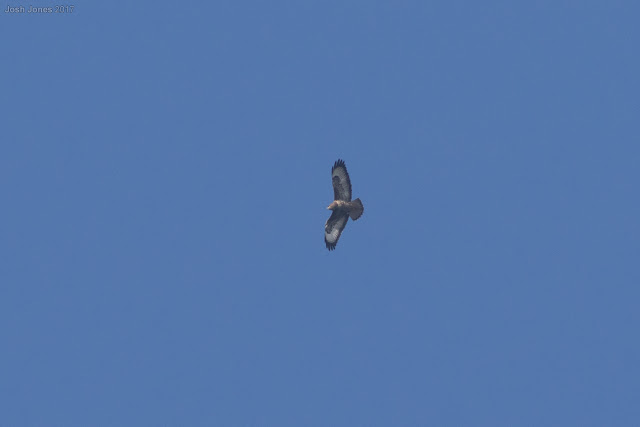 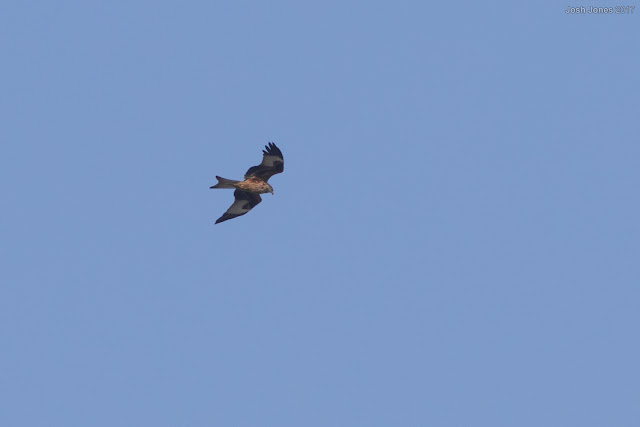 ... and a somewhat lower Red Kite

Personal highlight of the morning was a striking 2cy Yellow-legged Gull. This bird, with its extremely distinctive aberrant bill pattern, was first seen by Rich Bonser by the O2 Arena on 17 August 2016 and then intermittently either there or at nearby Thames Barrier Park until 23 December (and again on 11 February per Dante Shepherd). See Rich's photos here. This is, to the best of my knowledge, the first time it's been seen away from East London. 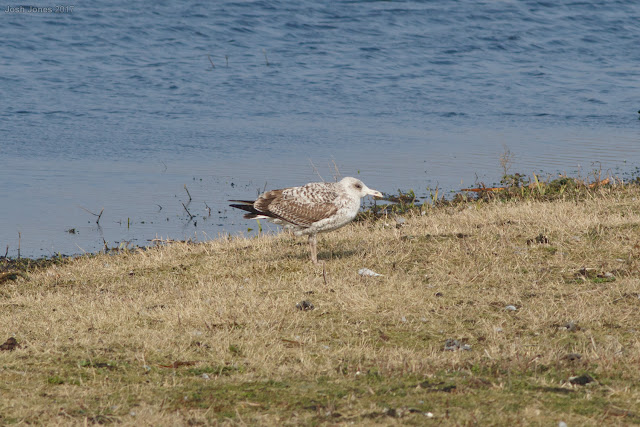 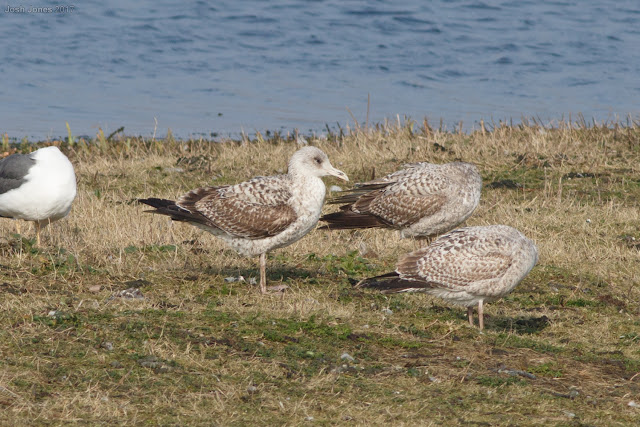 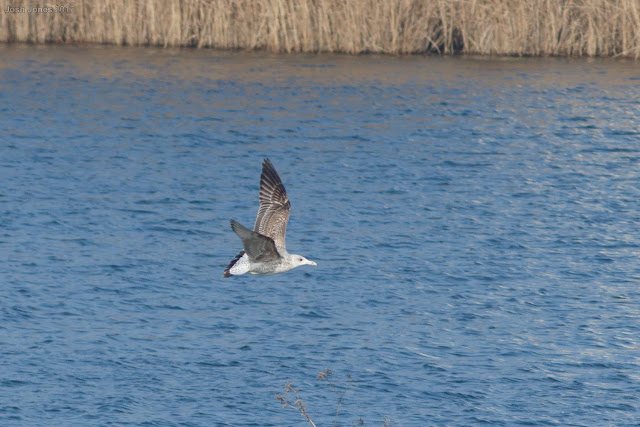 I finished the day at Chiswick Pier, feeding a legion of Black-headed Gulls. They recognise me and my bike now - as soon as they see me pull up they come in and wait for me to get the bread out my bag. It's nice to see a lot of them are now acquiring their hoods. Another encouraging sign that the long, happy days of spring and summer aren't far away. 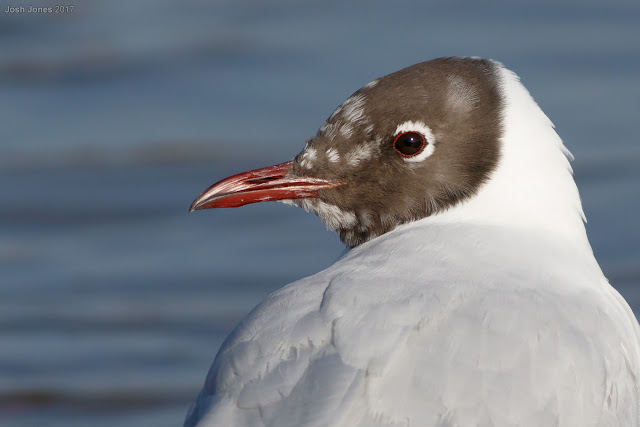 In addition to the gulls, this Egyptian Goose was grateful for my offerings. 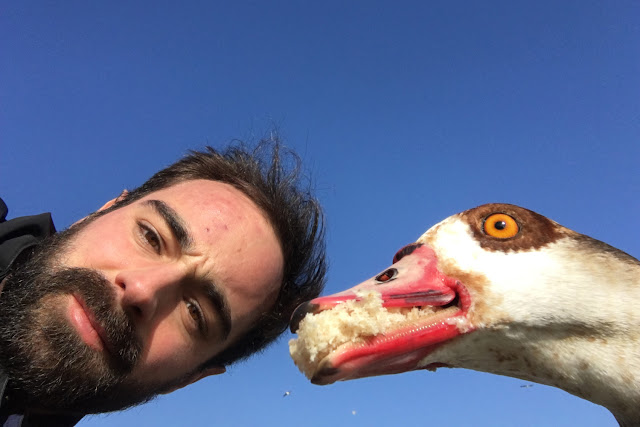 I did quite a bit of local birding over the weekend. No fewer than three visits to the WWT produced two Caspian Gulls - the usual 2cy bird on Sunday and a very smart 4cy bird that I'd not seen before. It was on the grazing marsh on Friday (when the shots below were taken) and then briefly on the reservoir on Sunday, before flying off upriver. I also saw the 2cy at Hammersmith Bridge and later Chiswick Eyot before it flew off upriver towards Barnes - on both occasions it was showing brilliantly but was flushed by insensitive members of the public! 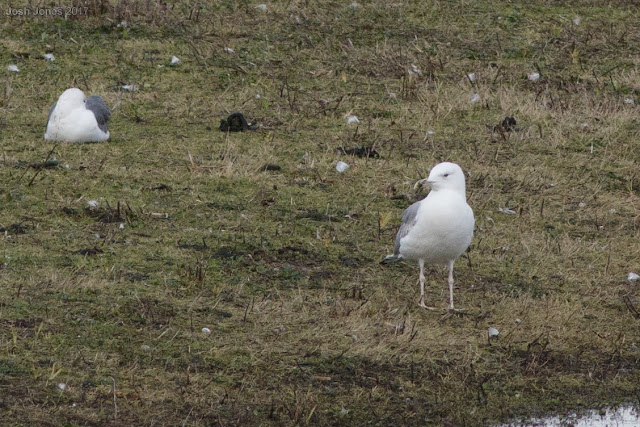 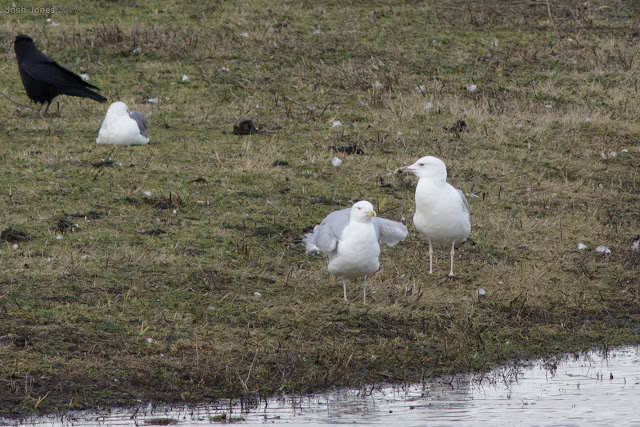 My Saturday visit produced my first Green Woodpecker and Greenfinch of the year. The latter has declined everywhere in Britain but it's become a seriously difficult species to find in many parts of London - this (and the two I had on Sunday) were the first I can remember seeing in months. My first summer migrants came in the form of a pair of Shelduck, freshly arrived on Saturday. Another year tick was Mandarin - at least two fully-winged, unringed drakes were in the Asian pen with the captive birds. 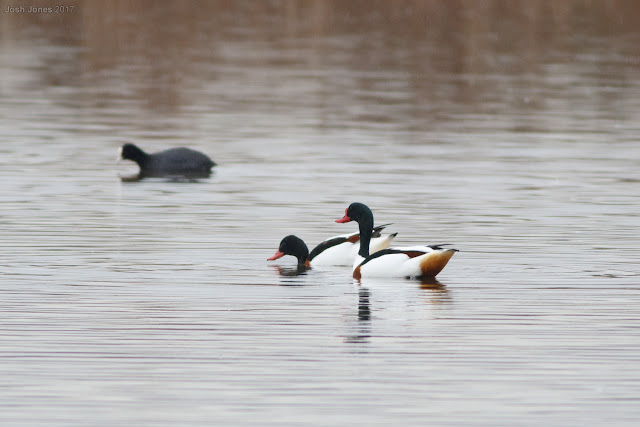 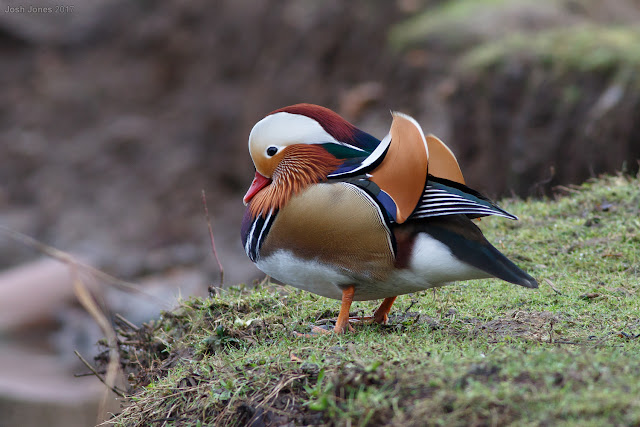 On Monday I took a cycle up to Gayford Road in Shepherd's Bush - the rowans that line this road are still stuffed with berries and I've been checking them regularly since Waxwings started pushing south just after the turn of the year. What seemed like yet another blank visit was suddenly enlivened as I cycled past the penultimate rowan and a distinctive trill greeted my ears - looking upwards, there was a silhouette with an unmistakable crest. The Waxwing dropped back down to feed, so I parked the bike and got my camera out to reel off a few shots. It quickly became apparent that two birds were shuffling around in the trees but as I lifted my camera, they burst out from the branches and bowled off eastwards. Two subsequent hours of searching plenty of likely spots in Shepherd's Bush and Hammersmith drew a blank - very frustrating!

Final stop before work on Monday afternoon was the River Thames at Fulham - my usual gulling spot. About 75 Herring Gulls was the best number I've seen here for a while (numbers have been low over the past couple of weeks) but I was pleased to see a familiar face rock up - a 3cy Yellow-legged Gull which I last saw here back on 17 December and, I think, I also recognise from back in September. It's well on its way towards second-summer plumage - the bare parts are really beginning to colour up. 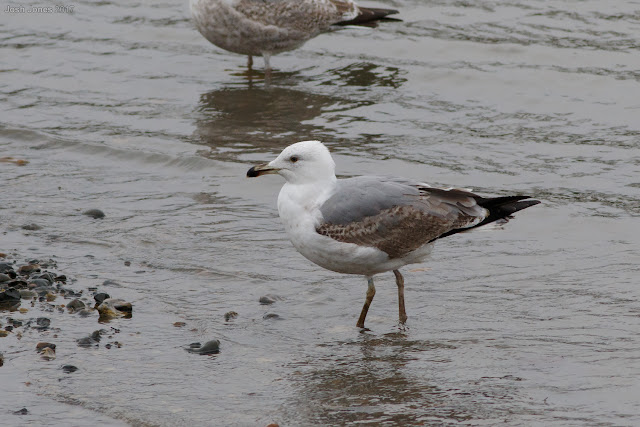 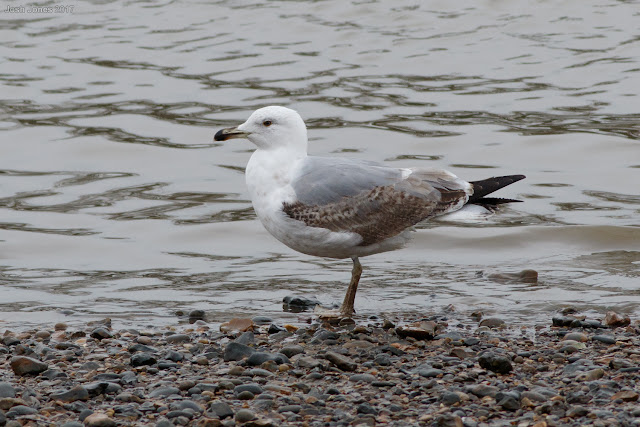