No sign of the end of the world in Peterborough yesterday. There were, however, a lot of large gulls. I remember moaning quite extensively about the demise of Peterborough gulling as the tips appeared to be closing. Not the case, it seems! The new cell at Tanholt is attracting thousands of birds, and I estimated as many as 5,000 large (mostly Herring) in the area both yesterday and today.

Yesterday was great. Got things under way with a first-winter Caspian Gull among at least 1,000 large gulls in fields on the south side of Dogsthorpe Tip - a welcome return to birds loafing here, where they give really good views. Despite searching, couldn't find much else here. 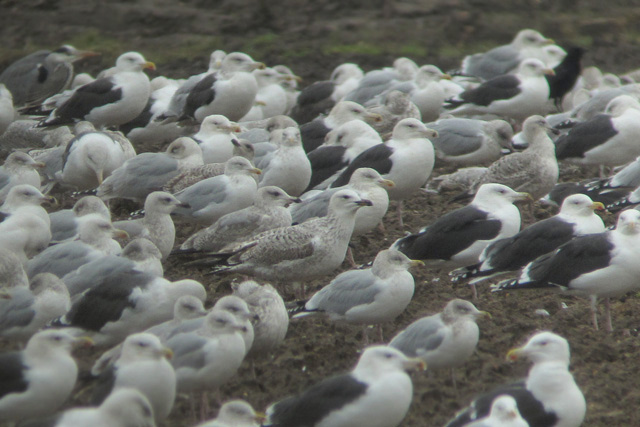 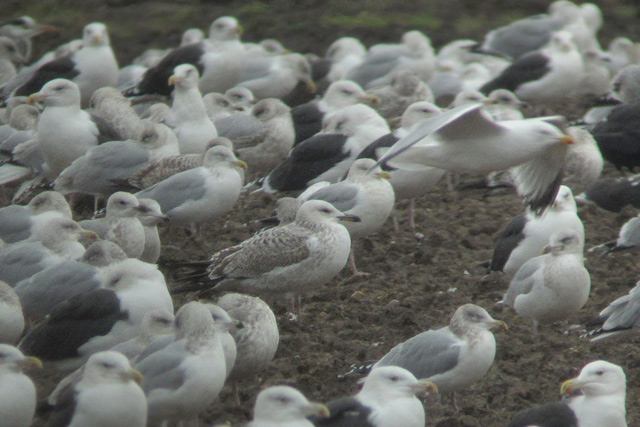 For the first time in a good few years, large numbers of gulls are also using the fields either side of Willow Hall Lane - no doubt because the new landfill cell at Tanholt lies adjacent. Soon picked up a massive juvenile Glaucous Gull in one of the closest flocks - presumably one of the two seen here earlier in the week (the other was an adult). This is quite clearly a different juvenile to that I had at Dogsthorpe in November. 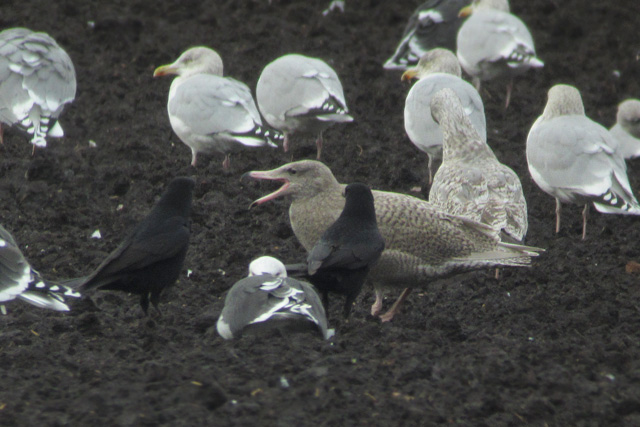 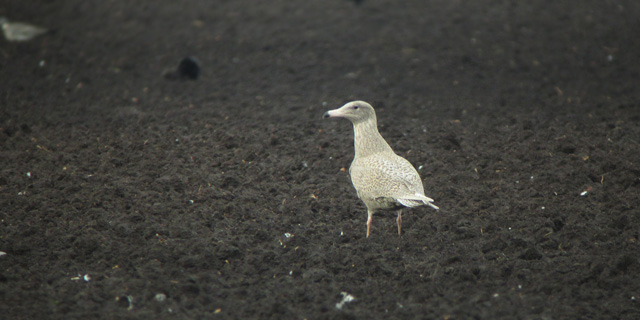 There were yet more gulls on the tip and pits at Tanholt itself. Scanning the birds around the new pit, a smart second-winter Iceland Gull soon appeared from among the Herrings on the banks at the far side. Shortly after, the birds spooked and I lost the Iceland in the melee although had a really smart adult Caspian Gull in flight and later in the field opposite, which was a nice way to end the session. 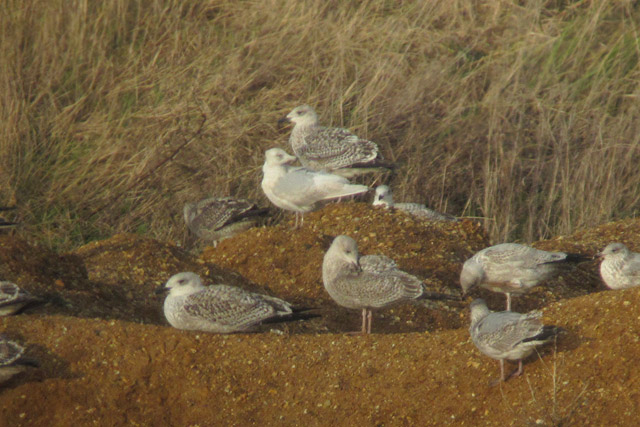 Had a couple of hours spare this afternoon, but couldn't locate any white-winged gulls. A second-winter Yellow-legged Gull was a surprise on the new pit at Tanholt but I didn't register anything else significant. Still thousands of gulls in the fields at Willow Hall Lane after 15:30 approached - I figured that they must be roosting on the Nene Washes rather than at CEGB Reservoir, so didn't bother going over there for dusk.

The past 24 hours have forced me to eat humble pie - this is Peterborough gulling at its best, made more ridiculous by the fact no one checks the flocks regularly. It seems really dynamic at the moment with lots of turnover and lots of northern gulls. What worries me is that a Slaty-backed or something similar will inevitably slip through the net here.
Posted by Josh Jones at 17:10 No comments:

Didn't anticipate that we'd get another chance at an accessible mainland bird so soon after the Norfolk individual. And what a bird - it really has to be seen in the flesh to be appreciated. Big size, stunning plumage and unbelievably tame - I had it to 1.5 metres at times. The call is striking too; a kind of slurred 'chuup' almost like a Bullfinch or a Snow Bunting.

Great day out with James Lowen. A speculative stop at Copdock also saw us pull out 45+ Waxwings there.

Click on the shots below for bigger, better versions in lightbox. 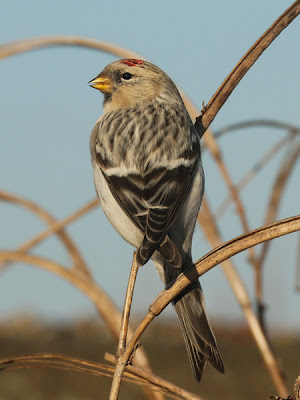 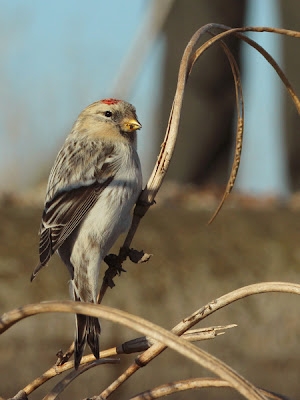 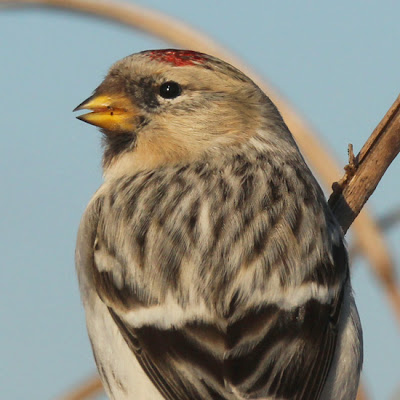 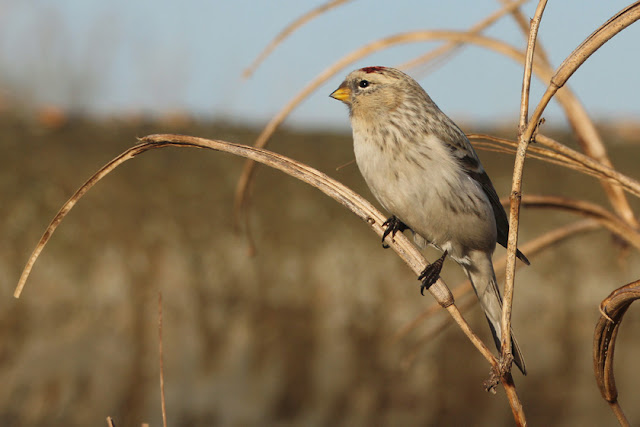 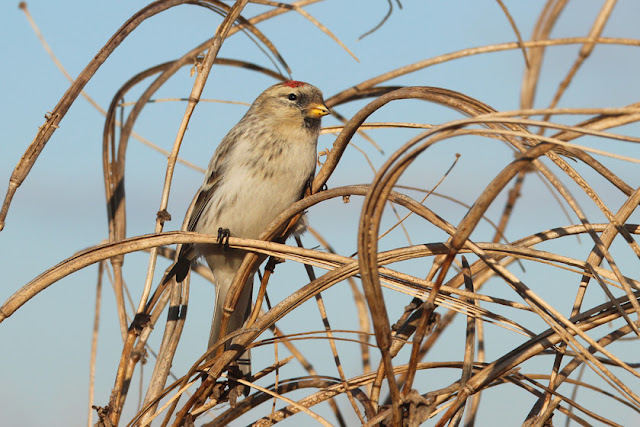 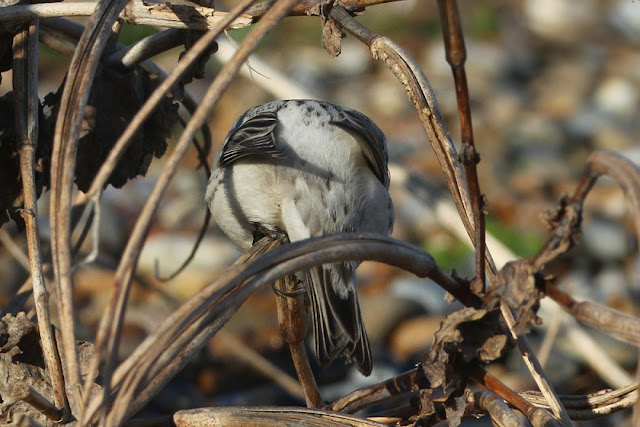 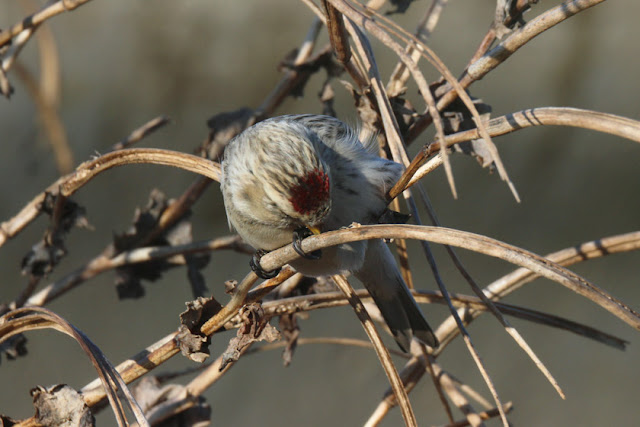 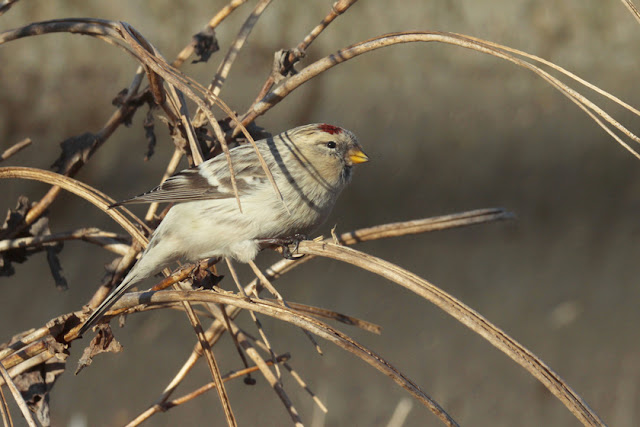 Had a great day in Estonia yesterday with Rich, Ernie D and Lee G. Flew to Helsinki on Friday evening and, after a few hours' kip in the car, caught the 07:30 ferry over to Tallinn yesterday morning. We were mightily impressed by how smooth the drive was west to Haapsalu - the roads (and the tyres!) are great.

Arriving at Haapsalu a little after 11:00, it didn't take long for the Fox Sparrow to show on the seeded area just northeast of the sewage works. Viewing was really quite restricted and the light was also low which made obtaining decent photographs a challenge. I was pretty pleased with the handheld digiscoped shots below given high ISO and low shutter speed! A juvenile Goshawk sat in a tree behind the sewage works was a welcome distraction, while several Fieldfares and a couple of Jays were also noted. 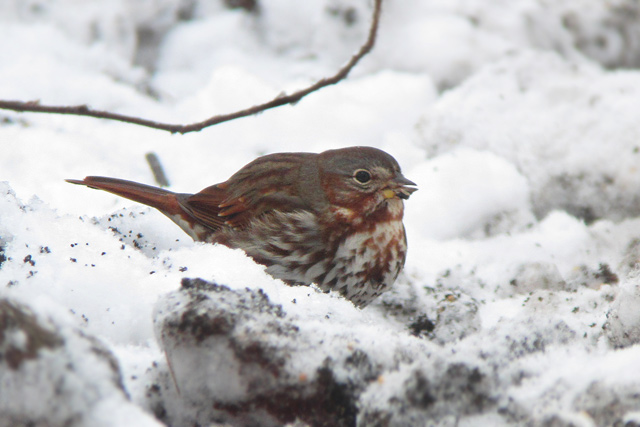 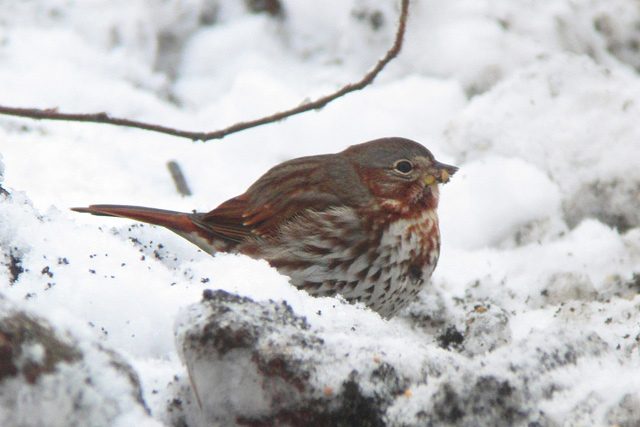 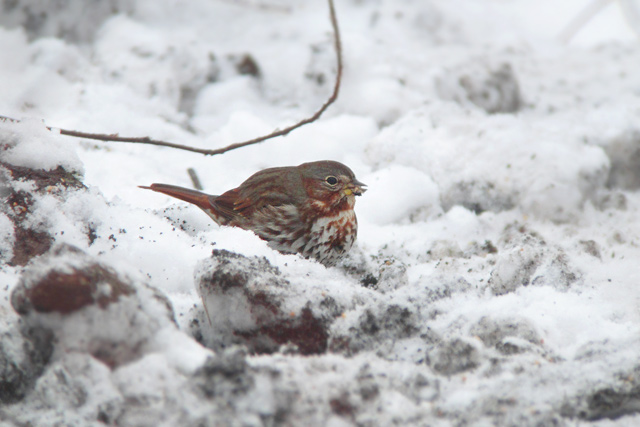 Moving round to nearby Vonnu Park at around 14:00, the highlight here consisted of respectable flight views of a Black Woodpecker as it flopped lazily across the lake area. Other bits around the park included several trumpeting Northern Bullfinches, a couple of white-breasted Nuthatches, Great Spotted Woodpeckers and a flock of 30 cracking Mealy Redpolls. 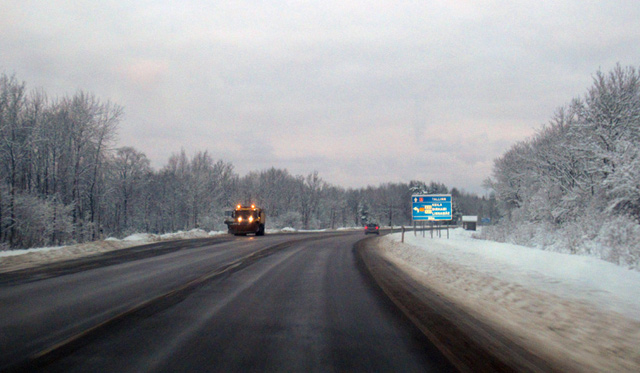 Days are short around the Baltic at this time of year and, with the light quickly fading, our limited birding time was already drawing to an end. We decided to head back to Tallinn, and spent an enjoyable few hours wandering round the old town, taking in the Christmas market, a couple of local ales and a tasty meal of Estonian sausage and mash.

Later in the evening, we took the last ferry of the night back across to Helsinki, sleeping all the way. A few more hours' kip in Helsinki airport proved the final act of the trip prior to an early flight back to London this morning - after landing at Heathrow at 09:15, I was back home for 10:30. Remarkable what you can squeeze in to a weekend!
Posted by Josh Jones at 22:07 No comments: 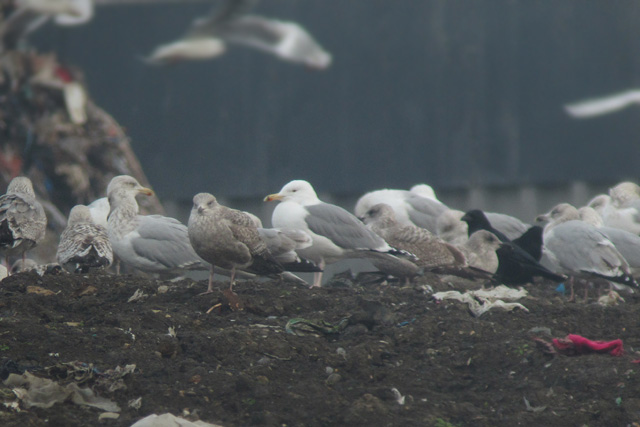 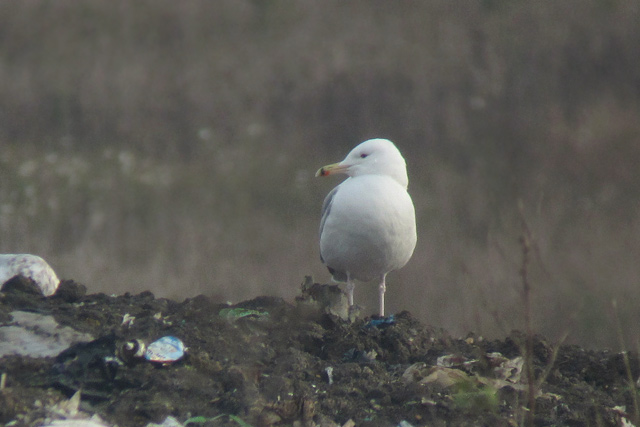 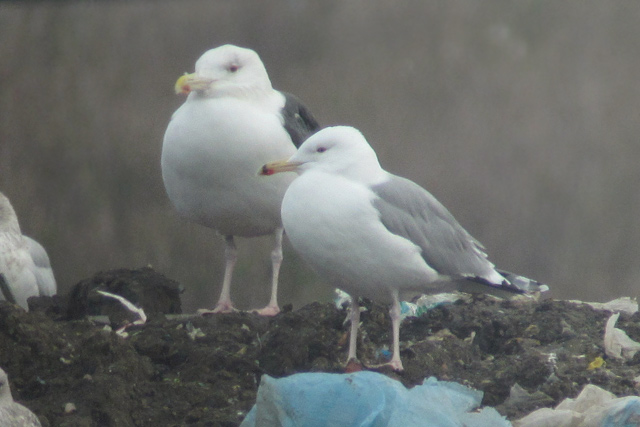 This perfect adult Caspian Gull was one of three on the tip at Rainham on Saturday morning - the others being 1cy and 3cy birds. It is quite a bright-billed and dark-mantled individual, and the pale eye can also been seen in the bottom image. My first Waxwing of the winter also dropped in a couple of times as we watched the tip. 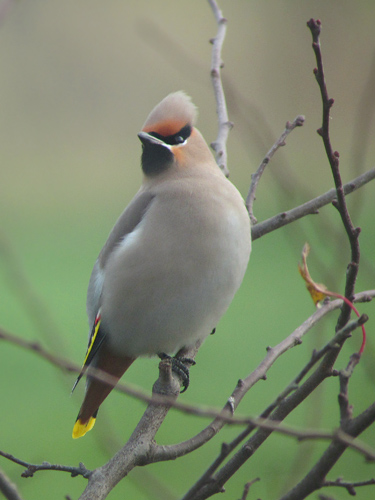