After reading with interest about local birder Richard Astle's flock of 80 redpolls at Bainton Pits, in the south of the Deepings Area, I decided to head home for a long weekend.

Got to Bainton about half nine this morning, but the sunny weather which was forecasted had failed to materialise. Nevertheless, a few Bullfinches and Goosanders made the walk around the Main Pit interesting. Got to the spot where Richard Astle had seen the redpolls shortly after, and sure enough a flock of c.100 was noted flying out of birches by the hard standing. What I was not expecting was to see, in my first scan, was a flock that appeared to contain a vast majority of Mealy Redpolls! Astonishing - it really was a case of 'spot the Lesser' - something I've never experienced in Britain previously. Looking back, it seems over three quarters of the flock were Mealies which, by my estimates, meant there must be a minimum of 70 present! It soon occurred to me that there would be a good chance of picking up an Arctic Redpoll, so I started sifting through the birds. 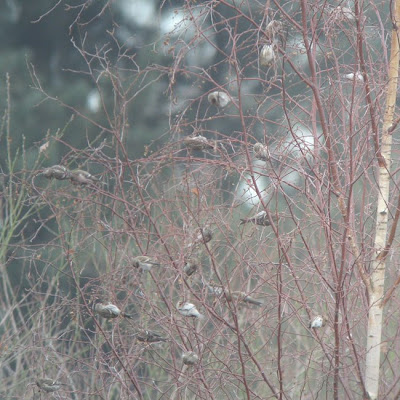 Sounds easy enough, but the birds were typically skittish, mobile and flighty. This meant that only portions of the flock could be searched properly at once, and the poor light didn't help either. Nevertheless, I picked up a good candidate after half an hour or so. Sure enough, further views revealed just a single, thin streak on the longest undertail covert and a large, unstreaked white rump. The bird was strikingly pale, with frosted upperparts and clean underparts. A couple of thick streaks on the flanks would be towards the streakier end of Arctic Redpoll, but everything else fitted. Brilliant - a self-found Coues's Arctic Redpoll!

Sadly views were brief, and this is the only photo I really managed(!) - the others haven't come out well at all, which is frustrating: 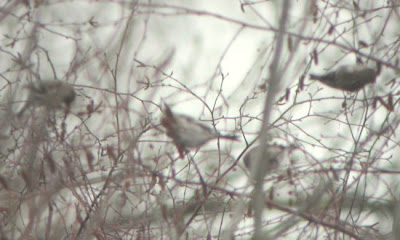 A second bird, which may be a dull 1st-winter female type, was also seen briefly and looked fairly promising. No photos, sadly.

So, a frustrating rather than satisfying day. The flock was seen again briefly early afternoon but not well, and the birds flew off high towards Helpston village in the afternoon. Shame! With so many Arctics being found at the moment, I suspect there may be more than one bird here...
Posted by Josh Jones at 21:39 No comments: