Returned from a week-long trip to the Azores with Rich Bonser at the weekend. It was my first trip to this wonderful islands - hopefully the first of many. The week was a general success, despite letdown on a cancelled flight way out west to Flores. We scored 60 individual 'Yanks', with 28 of these being Ring-billed Gulls (23 on Terceira). I've broken the trip down into a daily account, below.


19th February
A day of travel; our only birding opportunities came in Lisbon during a four-hour wait for a connecting flight to Ponta Delgada. In a casual stroll down to the seafront, we recorded at least two Firecrests, and a singing Fan-tailed Warbler.


20th February
A delayed early morning flight to Terceira meant that we were eventually out birding on the island by mid to late morning. First stop was at Paul da Praia, where the impressive flock of birds consisting of American Coot, Bufflehead, Lesser Scaup, 3 Ring-necked Ducks, Greater Scaup, 10 Tufted Ducks and several Coot was showing admirably, although the Great Blue Heron was not present. 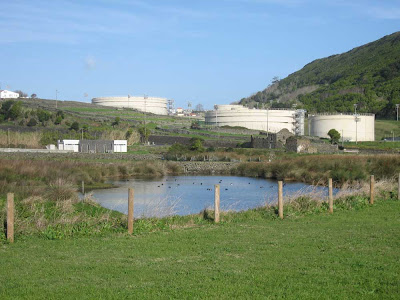 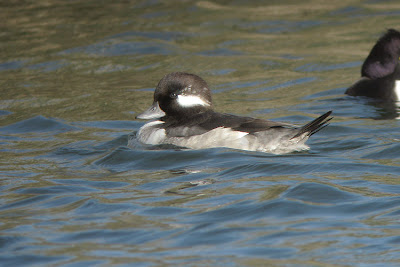 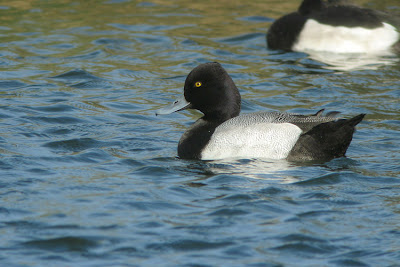 In nearby Praia da Vitoria harbour, the White-winged Black Tern did a customary fly-by, and the ringed Sandwich Tern and Slavonian Grebe were showing well during a number of visits throughout the day. This was also my first opportunity to study Atlantic Gulls - 2nd-winters are definitely the best!! Cabo da Praia produced the Semipalmated Plover almost immediately, as well as the Lesser Yellowlegs, a Dunlin and 3 Knot amongst the usuals. 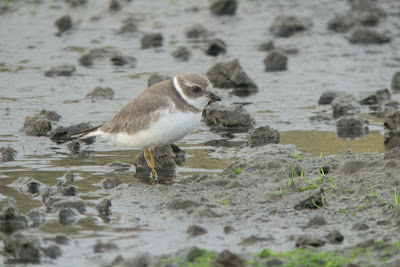 The plateau saw us score Greater and Lesser Yellowlegs(es) at Lagoa do Junco, and the Wood Sandpiper wintering here flew round calling a few times. A couple of Greenshank ensured no close views were had of the Greater Legs. Cabrito Water Reservoir, the dump and Lagoa dos Patos were all quiet. 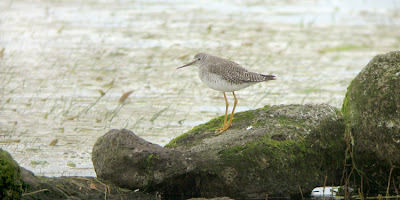 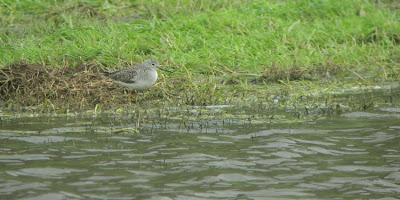 Above: Lesser and Greater Yellowlegs, Lagoa do Junco

It was time to start thinking about the main target, so we headed down towards Angra do Heroismo. There was a Greylag Goose accompanying the local Muscovies in Sao Matheus harbour. Quickly getting disillusioned by this foul creature, we headed to Angra, where we were amazed to find the Yellow-crowned Night Heron sat out on the rocks at 15:45! We hurried round, and the result was well worth it (see below). The Spotted Sandpiper was also showing well, as was the 1st-winter Pied-billed Grebe - all three often in the same view, ridiculous! 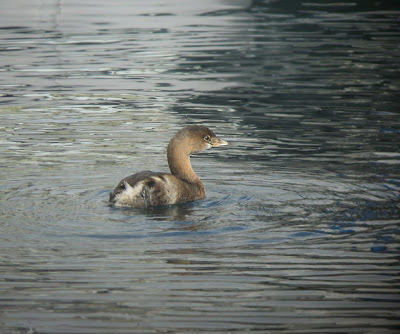 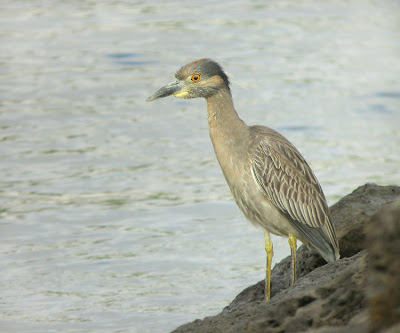 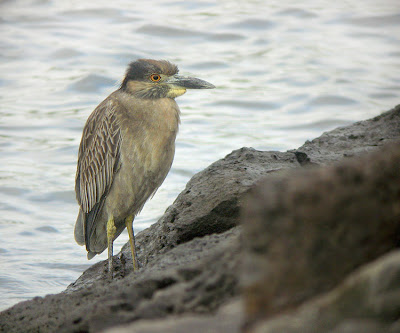 We finished up at the Praia da Vitoria gull roost, where a 2nd-winter American Herring Gull, a 1st-winter Bonaparte's Gull, Great Black-backed Gull, 2 Med Gulls and at least 18 Ring-billed Gulls were all chilling out.


21st February
The day was spent around Terceira, checking the sites we did yesterday. Unfortunately, poor weather meant that upland sites (e.g. Junco, the dump etc) were all impossible due to a lack of visibility.
New birds not seen at Cabo da Praia the previous day included the female Blue-winged Teal, Semipalmated Sandpiper, Little Stint, 3 Curlew Sands and a Quail, as well as securing the all-important Azores tick of Collared Dove in the town. The White-winged Black Tern flew over the quarry in the evening. 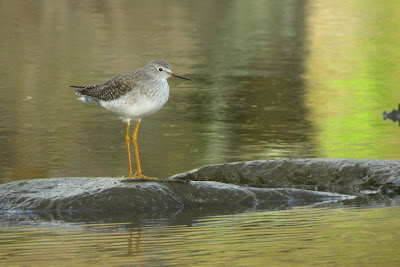 All the ducks were still present and correct at Paul da Praia, where there were up to 7 Little Egrets early morning and evening. Despite several checks throughout the day, it was not until our last check at dusk did we find the Great Blue Heron, which had clearly just arrived to roost. It sat amongst juncus for a bit then caught an eel (which proved amusing) - stunning bird and the final of four WP ticks I had on Terceira (others being the coot, YCNH and Semip Plover). 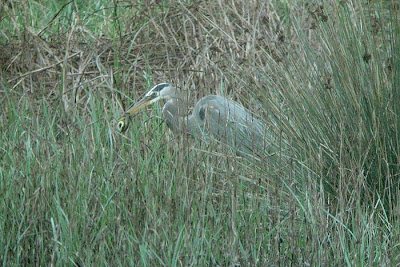 Down the coast at Porto Judeu, we had two Gannets offshore in the afternoon. The gull roost at Praia da Vitoria didn't contain an American Herring Gull but the 1st-winter Bonaparte's turned up again, and showed better. Just one 1st-winter Ringer flew by.


22nd February
The Great Blue Heron was still at Paul da Praia early morning then flew off and landed on the hillside to the north. The ducks were all still there too, whilst 2 Barwits, 25 Blackwits and 4 Ruff were at Cabo da Praia quarry. We then had to head to the airport for our flight to Flores, via 23 Ring-billed Gulls sat on the runway. Unfortunately, our flight to Flores was cancelled due to inclement weather conditions at 'destination airport', so some quick thinking saw us on a late afternoon flight to Horta, with the aim of doing Faial and Pico instead of heading west. It was dark by the time we got in to Horta, but it was nice to meet Olof and Arnie and have a few beers - they were going to try and get out to Flores again the next day.


23rd February
Early morning saw us full of optimism and stood waiting for the 07:45 ferry over to Pico. I picked up a Great Northern Diver in Horta harbour, which is always a decent bird out here. There was little else in the harbour, although the crossing was more productive with plenty of gulls, Cory's Shearwaters and a nice adult Arctic Skua.
A few waders were around Madalena harbour, Pico, with the highlight being a couple of Dunlin. Our first port of call were the upland lakes across the centre of the island due to the weather looking fairly clear. A female Wigeon was a Lagoa do Capitao, and a Mallard was seen nearby. Flooded fields near Lagoa do Paul held 10 Eurasian Teal and a snipe sp., which looked dark as it flushed but I could not find it again despite traipsing round fields for ages. No hoped for yanks, then.
We headed down to Lajes do Pico which was another disappointment, with little more than a few waders (all European!). Further searches of the harbours on the north of the island and around Madalena produced very little.
And so it was back on the ferry across to Faial. It appeared the gods had acknowledged our hard day of grafting on Pico, and provided us with a superb 1st-winter Bonaparte's Gull flying close past the boat about half a mile outside Horta harbour, which Rich and I both independently picked up at the same time. At last, something decent. A couple of adult Kittiwakes roosted just off the harbour with Black-headed Gulls, but we didn't pick up the Bonaparte's again.


24th February
Today our first birding was in the fog at Lagoa do Pedro Miguel, which took some finding! We eventually got there Corvo-style, with a lift in the back of a local's pick up truck. The only bird was a Grey Heron; a few gun shells around the lake suggested that the locals had probably shot and eaten anything American that had been present previously. Back down in Horta harbour, we couldn't find the diver nor anything of particular interest so we soon moved on. Coastal rocks at Feteira provided two 1st-winter Ring-billed Gulls on rocks there with Black-headed Gulls.


The time then came to go to the airport, where we caught an early afternoon flight to Sao Miguel. First site was the small lake at the farmhouse just outside Faja de Cima (name escapes me), where 5 Blue-winged Teals, a Garganey, 2 American Wigeon and a female Greater Scaup were all still in residence. We did the pool at Batalha golf course, as well as Ribeira Grande - zilch! There were 8 Grey Plovers at ETAR, Ponta Delgada, whilst the roost in the harbour there produced a 1st-winter Ring-billed Gull, a 1st-winter European Herring Gull, 5 Mediterranean Gulls (including an adult ringed in Lancashire), and a 1st-winter GBB Gull amongst the 250 or so Azorean Gulls. Not bad at all. 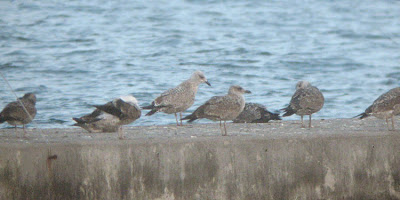 25th February
Our final day's birding before a flight back to London in the morning of the 26th. We slept in a car park somewhere in the mountains at the east end of the island, where two courting couples were also present in very steamed-up cars...! We eventually tracked down one Azores Bullfinch flying around calling at the traditional clearing after three hours, and left shortly after - a couple of Woodcocks were also heard roding in the early morning light.
At nearby Povoação harbour, two 1st-winter Ring-billed Gulls were showing very well amongst Muscovy Ducks, and allowed for some photo opportunities. Quite interesting watching these birds, one was much larger and more advanced than the other, and repeatedly aggressive towards the smaller bird. Presumably male and female: 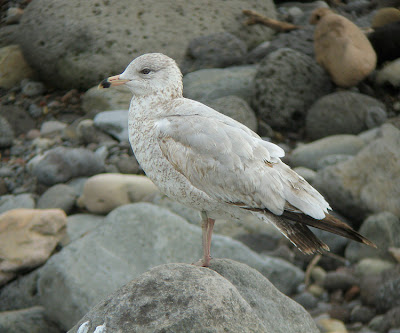 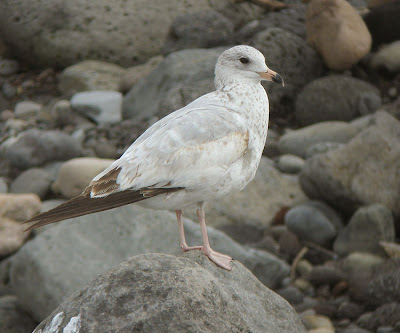 At Lagoa das Furnas, the ringed Spoonbill performed to just a few yards amongst Muscovies (which are everywhere here, the bastards). In addition, the long-staying Pied-billed Grebe had acquired breeding plumage, whilst a drake Green-winged Teal was amongst 62 Eurasians. The egg-like smell eminating from the sulphur springs here was offensive so we moved on. 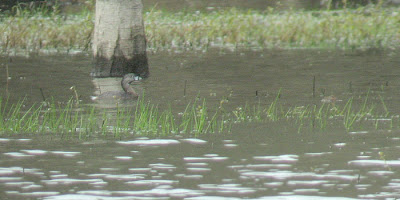 A fair drive was then undertaken to the east side of the island, where we visited the crater lakes of Azul and Verde. The Pied-billed Grebe and two female Greater Scaup were noted from the bridge, the drake American Wigeon was at Sete Cidades, and a female Pintail was at the east side; Lagoa Verde was birdless. Nearby Caldeira do Alferes was the best-looking site I saw on Sao Miguel, with a female Blue-winged Teal, female Ring-necked Duck, 4 Pintails, drake Shoveler, 2 Gadwall Spoonbill, Black-tailed Godwit and 10 Tufted Ducks were noted amongst 88 Eurasian Teal. 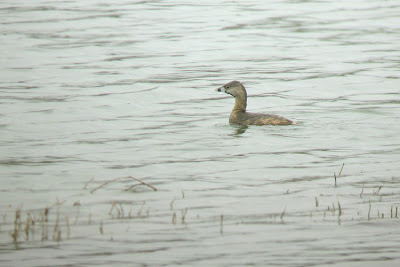 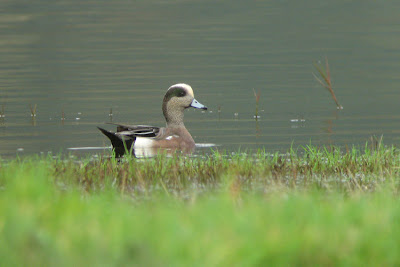 The weather had cleared somewhat so we headed down to Mosteiros with a seawatch in mind. The weather was the best of the trip, with warm sunshine feeling very pleasant indeed. I strolled around looking for the recent Purple Sandpipers but only found Knot, Turnstones and Whimbrels. Rich had a look at the sea, got suitably bored (nothing passing), and we went back to Praia da Vitoria for the gulls. The 1st-winter Ringer was again in the harbour but the gulls were disappointingly flighty. At ETAR, the 8 Grey Plovers were still present.

So, overall an excellent trip as previously mentioned. I look forward to being back on the islands as soon as possible; the only thing that let us down was the weather. Oh, and our flight back to Gatwick which managed to lose my bag (still waiting for it to arrive at time of writing; 28th February, 18:00). I saw the Oriental Turtle Dove in Oxon yesterday morning, but the situation surrounding the twitch was a bit grim and I left shortly after seeing it.