The east wind still blows but it's been a good day for the French and Welsh! This update may not make much sense, and is written very poorly, but I'm half-asleep (dead) already and it's only 22:30! So... sorry!

Aside two great rugby victories early this morning, the birds have been great too. In fact today has had it all; relief, joy, exhaustion, pain and also a little frustration late on!

This morning, the France v England game was interrupted by a message on the walkie-talkies that a 'wood warbler' was present in tamarisks below the airfield. "American or European?!" I replied. "American" came the answer and off we went.

After a bit of a wait, the bird came out to play. I was the first to get views of the bird on the deck, and it quickly became apparent it was a Yellow Warbler; presumably a 1st-winter male judging by the lovely bright yellow-green plumage. It was calling quite a bit with a typical Nearctic wood warbler "chip", with call and elusive/flighty behaviour reminding me very much of my first WP Yellow Warbler at Mizen Head (Cork) in 2008 - as with this one, also enjoyed alongside Ernie Davis! Nice start to the day! Following the warbler, I worked much of the upper/middle fields area, including alot of the tamarisks. The constant easterly airflow seems to have finally had an effect as I had no less than four Willow Warblers in the upper fields area. Not what we want! A (the) juvenile Barn Swallow also flew over.

We organised a taxi lift up to the valleys for 11:30; destination for Pierre and I was Cancelas as it hadn't been done for a couple of days. After working the lower reaches of both Cantinho and Cancelas with little luck, we began the ascent up the main part of the latter towards the lighthouse road. About 200 yards up on the north side, I twice heard a sharp "ziip" which excited me at first. However it did not call again and, with many Starlings around making odd noises, I dismissed it and continued some 50 yards or so further up the valley. Some 15 minutes later I had Pierre on the radio saying he had heard what he was sure was a wood-warbler calling four times down the valley from my position. I went back to meet him and we heard it twice more - it was at this point I realised it was more or less the same position I'd heard a bird earlier - shit!

Moving round to the north side of the valley, we again heard the bird call and Pierre picked it up, flitting around in the canopy. I soon got on to the bird and it was clear it was a rather splendid 1st-winter male Northern Parula! Fucking get in, at last the first find of the trip! A bright individual with lots of deep orange streaks on the yellow breast, it was a much better looker than the already-stunning female I saw on Tiree last year. We radio-ed the news out and a few people came to look; I think almost all connected.

Boosted by the find, we continued up the ribeira to the lighthouse road. From here, we decided to continue to the upper reaches of the valley above the road, and bang! Another yank popped out in front of me - Red-eyed Vireo! The bird showed well out in the open at about 10m range for 30 seconds or so, but managed to disappear by the time Pierre had walked round to meet me. We couldn't relocate it so decided to head back towards the reservoir. 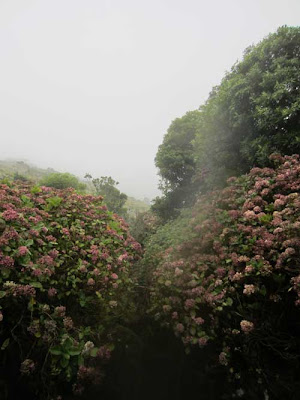 The reservoir was fogged up, so we did the lower slopes of the hill and the valley to the south; amongst the few birds here were a Quail and a Woodcock. We continued south towards the juniper bushes on the hill above the 'Tennessee Valley', but again couldn't find much. Heading down in to the valley, it did not take us long to relocate the Tennessee Warbler still showing well at times and calling regularly, although it seems much more restless and mobile today in the company of two Willow Warblers. We left Vincent and Rafael to continue the plight for photographs, and headed down towards the Miradouro as the light was slowly going.

Now for the frustration. At dusk, just below the miradouro, Pierre and I had a small warbler-sized bird flew up from our right and buried itself in tamarisks above the road. I heard it utter a single soft, high-pitched "siit". It must have been another American wood warbler but what species remains a mystery as we couldn't relocate it in the ever-worsening light. Unsurprisingly, this will be our first port-of-call in the morning!

Today has been exhausting yet deeply rewarding, especially as the wind is still firmly stuck in the east. A half-decent low looks to be passing to the northwest of Corvo tomorrow and Monday, so perhaps we might get a few more birds.

By the way, the Blue-winged Warbler is also still here today (seen by others). 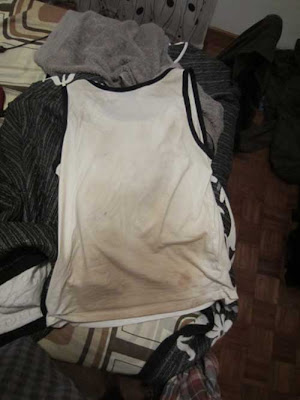 This is what Corvo does to white clothes.