Somehow, the southeasterly wind still clinged on today, although it went more southerly by the afternoon as the the depression tracked some way to the northwest of us. We also had a few heavy showers this afternoon and evening, the change in weather suggesting perhaps that the influence of the low had just about hit Corvo. So perhaps from tomorrow there will be birds...?

Talking of new birds, two were found today. JSH and MBH found a Grey-cheeked Thrush in the valley below the reservoir, whilst Hannu flushed a Blue-winged Teal from a dry grassy field near Fojo(!).

My day was not quite as spectacular, unfortunately. I started off by exploring the small wood above the Lighthouse Road. Spent 90 minutes there but nothing! The rest of the morning was spent exploring alot of fields; most notably the Lapa Fields and upper Ribeira da Lapa. No birds!

I spent an hour at the Blue-winged Warbler from around midday. Had my best and most extensive views of this absolute gem of a bird today, it's very easy to locate as it calls regularly with a sharp, piercing 'tsiip'. Pretty mobile though! Afterwards I headed back to Lapa, and worked the lower part of the valley. Again nothing, so I moved on to the fields along the road back towards the miradour. Nothing! Bleugh!

Came back down the hill just as the newly-arrived birders were getting a taxi up to the BWW. Had a rest for half an hour before heading out to the Middle Fields and the adjacent tamarisks. No bloody birds! Desperate times called for desperate measures, so I sat at the rubbish tip for half an hour - amongst 30 Azorean Gulls, I had four 1st-winter Lesser Black-backed Gulls. The variation amongst Azorean Gulls is also quite fascinating. Saw one or two that looked very similar to claimed birds in the UK but I still wonder if the latter birds are Herring x LBB hybrids. I'll go back to take proper digiscoped photos tomorrow, but for now here are some digi-binned efforts: 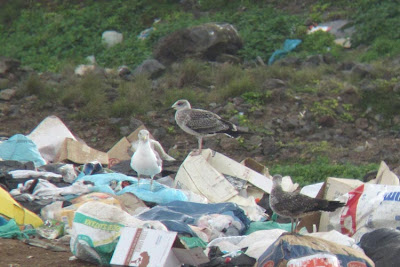 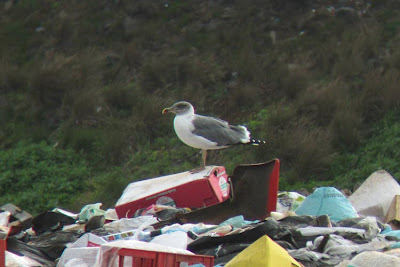 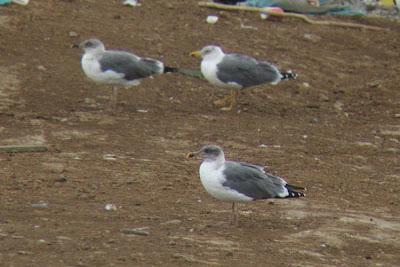 Near-adult Azorean; essentially adult-like but with signs of immaturity in bill colouration and primary coverts, as wells as dull pinkish-yellow legs. This bird looks frighteningly similar to the "Azorean Gull" that has been at large in England for the past two autumns. Problem with that bird is that it should look more adult-like this year. It doesn't. Could hybrid Herring x LBB look like this...? Perhaps the hybrid option explains the retarded plumage/appearance of the English bird? Either way it looks extremely similar to this bird.