The wind is still in the east, but as quoted on Netfugl this evening, PAC is Back!

The day started pretty lazy; no one was expecting new birds with the weather as it is and so most stayed around the village seawatching - some went to Cantinho but saw nothing. The seawatching was good; Olof connected with a juvenile Sabine's and a (the?) Fea's-type but I saw nothing more than lots of Great Shearwaters. A wander around the shoreline to the west of the windmills saw me eventually connect with the juvenile Spotted Sandpiper that has been around a while. I seawatched until around midday, before deciding to lazily walk back to the house for some lunch and an afternoon nap.

Until bang! Pierre found a Tennessee Warbler in the early afternoon in the valley northwest and above the Miradouro that overlooks the village. Fortunately, he rang me to tell me just as I was nodding off in an attempt to read my book. I panicked, and began to run up the hill towards the miradouro. Big mistake - it basically f**ked me up, but did make me realise how unfit I am. Some half an hour after the news broke, I finally made it to the valley in which the bird was present - it had been favouring large areas of fennel on the east side of the valley, but was very mobile and had only really been seen in flight.

I soon got on to the bird as it announced itself with a couple of typical Nearctic wood warbler-type "ticks" and then proceeded to perch in a juniper some 20 yards in front of me. Wow! I called the others over as I enjoyed excellent first views of the bird through binoculars; a lovely lime green on the upperparts and rump, with obvious paler yellowish supercilium, sharp grey bill, yellowish throat and breast, and whiter underside and undertail coverts. We enjoyed further views both in flight and in the fennel, and enjoyed the bird's high-pitched zitting. One thing that struck me was how long the bird remained stationary as it fed - so much so that I'm hoping to go back tomorrow to try and digiscope it! Not at all like other warblers, and nothing like the two flighty Willow Warblers in the vicinity.

The rest of the day was spent with Pierre heading around the slopes west of the 'Tennessee valley', as well as in the upper fields. No more birds aside a Quail, but I don't care - magnifique and big thanks to PAC for finding a bird on a day when everyone else was down in the dumps!

Lots of Great Shearwaters still offshore this evening and a Whimbrel flew over (European). Guess the pterodroma is still out there somewhere. 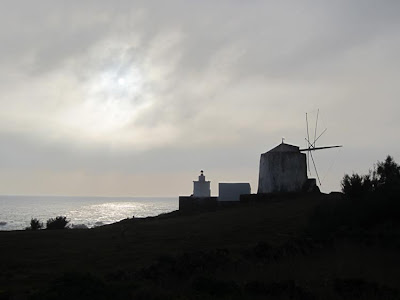 The windmill this evening.