First of all, an apology for not getting to update about the last two days of the trip until now - only just got back home today, and my laptop died out in the Azores so will have to buy a new one of those now... more expense.

Basically, I'll give a fairly brief run-through of the final two days. With so many birds on neighbouring Flores, we chartered the ferry (a rib) for a return trip across on Thursday 13th - this hopefully also giving us a crack at some of the interesting seabirds seemingly in Corvo/Flores waters. As we were getting on the boat, news broke that a Common Nighthawk had been found at Ponta Delgada (our destination), and with that the already-high expectation levels ascended further. The trip over was relatively uneventful for seabirds, with one or two Leach's Storm-petrels noted amongst the large numbers of Great and Cory's Shearwaters. After an enjoyable close look at some of the fascinating rock formations on the cliffs at the north end of Flores, we pulled up in Ponta Delgada harbour and were met by three taxis - enough to accommodate all 22 of us that had travelled over! First port of call was inevitably the old football field at PDL, where we arrived to find the Common Nighthawk sat in long grass by the clifftop. An attempted flush seemed at first suggest the bird was dead before it attacked me (no jokes) and then just lay there, looked knackered with it's wings open: 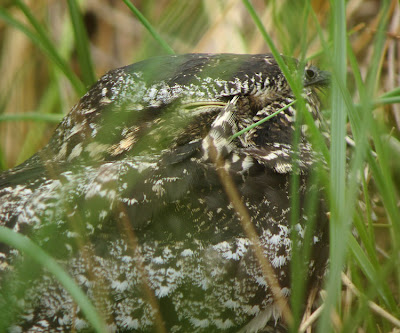 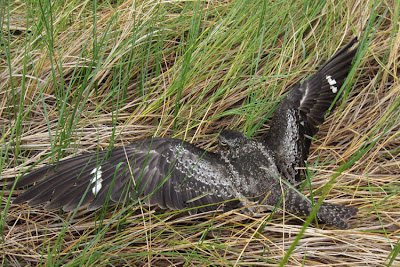 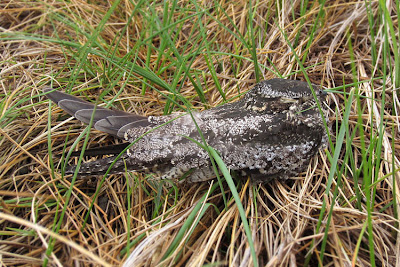 Leaving the poor, wretched goatsucker alone, we all piled in the taxis and headed for Lagoa Lomba. A brief look at Lagoa Seca produced two Black Duck-types - perhaps hybrids but very BD-like; we did not linger for anything more than distant views from the road: 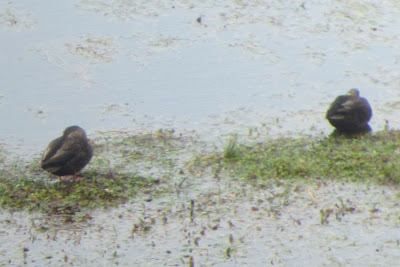 The drake Wood Duck was surprisingly easy at Lomba - I soon picked it up feeding in emergent vegetation on the far side of the lake but, with an excitable mob of the WP's keenest listers arriving, the bird wasted no time in making for overhanging trees and thus out of sight: 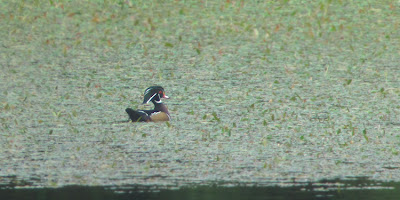 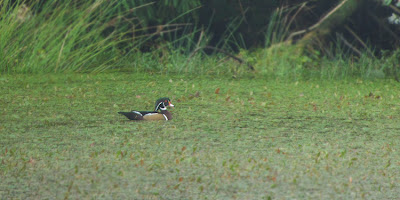 Things were going very smoothly indeed as we headed round to Faja Grande. This splendid first-winter Bobolink continued the trend, showing well in a small crop field, on stone walls and occasionally flying around calling. A much nicer bird than I ever imagined, being a beautiful rich yellow in colour with go-faster stripes and pink bare parts thrown in for good measure: 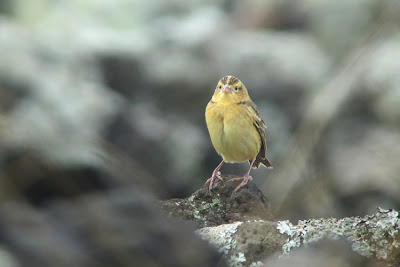 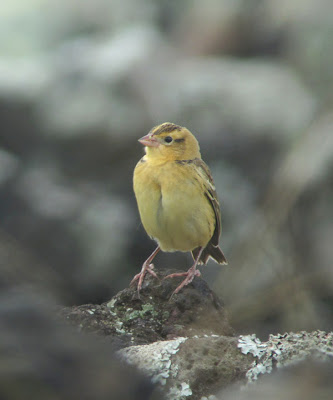 A juvenile Pectoral Sandpiper was also noted here on the the lava fields, but seemed quite wary as it bombed around looking alert as anything. Wary waders formed a significant part of the rest of the afternoon, as we headed for Ponta do Albarnaz. Another taxi-load had located the Upland Sandpiper that has been in the area here for a few days, and had even gone on to find a second bird with it. It took a while but, after walking through plenty of fields and jumping over several walls, an Upland Sandpiper was eventually located sat on a wall a few fields east of the lighthouse. The bird was pretty aware of our presence though, and soon launched itself into the air and off east, calling with a beautiful bubbling crescendo as it did so. Ridiculously, this was my fourth WP tick of the day(!) - something that doesn't happen often when vagrants are concerned. A couple of adult White-rumped Sandpipers were also here with a Dunlin and two Sanderling.

With no news forthcoming on the exact location of a reported Dickcissel, I spent the last hour or so left on the island lazing around near the harbour at Ponta Delgada, waiting for the boat. The trip back was a bit more eventful with a couple more Leach's Petrels, loads of showy Great Shearwaters, a shark species and plenty of Common Dolphins giving wonderful views. However, as we neared Corvo, the peace was shattered by a crackly message on the walkie talkie from Peter and Eric - they'd just had a large martin (presumably Purple) fly in off the sea at the windmills! Shit! The rest of the evening was spent searching for it and the Cliff Swallow found up by the power station by two Israeli birders - no luck, but a Spotted Flycatcher there was a good Azores tick, even if it has been round a few days.


So, that was Thursday. Friday 14th dawned bright and sunny, with me standing overlooking the fields, cliffs and sheds a few hundred metres up the road from the power station. Everyone was reasonably confident the hirundines would still be around, but less positive about how long it would take to track them down. The answer soon came - not very long! The Purple Martin flew south past me at about 08:05 - amongst expletives I sprinted down to the power station to find the first taxi load of birders had just arrived, and thankfully connected! At least it wasn't a single observer record...

The Purple Martin, along with the Cliff Swallow, went on to show pretty well on and off throughout the morning, mainly over the fields north of the power station - the latter bringing up the 600 for me in the Western Pal. The undoubted highlight of the morning was a ten-minute pornstar-style showing from the PM, when it sat on a stone wall chilling out in the warm sunshine: 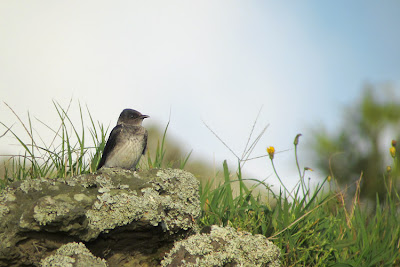 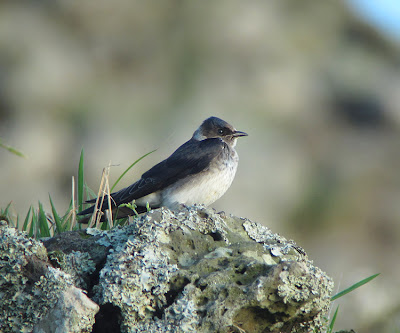 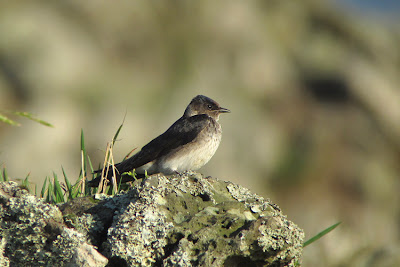 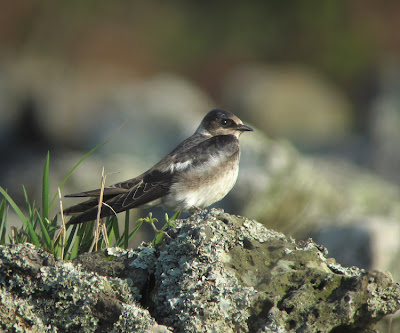 A great trip - eight new WP birds, all of high quality. So, would I go back to Corvo? To put it bluntly - yes. However, don't let the long lists of American vagrants reported each day fool you. Corvo is not an easy place to go; the birding can be supremely difficult at times and, if the weather is not on your side (it wasn't for me - all but one day of east/southeasterlies) it can be a draining place that can mess with your mind(!). However, the rewards are high and, if you are lucky enough to encounter westerlies on a trip then the birds soon start to arrive - take the 24 hours we had on the 13th/14th that produced the two hirundines mentioned above, as well as a 1st-winter Blue Grosbeak for two lucky observers (a true first for the WP). The big difference between Corvo and the rest of Europe is that you really don't need fast-moving depressions to see Nearctic passerines - sure, the best 'falls' occur after these but the phenomenon is similar to drift migrants on the east coast; an airflow from the right direction and you're in business. Perhaps I'll be back next October.

Now, back to the reality of British birding...
Posted by Josh Jones at 20:39