The New Year dawned cold and bright - though there was an almost total lack of snow around Karuizawa (very unusual for this time of year), we had at least been afforded a hard frost. As we walked down towards the bird forest our first birds of 2016 included a couple of decent flocks of Rustic Buntings and a new bird for the trip: Japanese Green Woodpecker. Meadow Buntings and Dusky Thrushes were common, as was the usual range of woodland species that we'd been encountering throughout our fortnight in Japan - more notable species included Hawfinch and Japanese Pygmy Woodpeckers.

A pair of Brown Dippers were on the river opposite 7-11 while I jammed in on a male Long-tailed Rosefinch in the scrubby area behind the store; unfortunately it had disappeared by the time Rich arrived. A male Daurian Redstart there was one of only a few encountered at Karuizawa.

We'd been given recent gen on a pair of Japanese Accentors, seen just before Christmas along one of the bird forest trails. A thorough search of the stream failed to produce the species but we bumped in to a male Naumann's Thrush, which flew up from the track and gave brief views before flying off in to the forest - another surprise bird for the trip.

While Mick went to twitch a waterfall to the north of town, Rich and I spent several hours walking the trails in the bird forest. Birds were relatively few and far between and it was by no means easy going. It seems like finding Copper Pheasant here requires luck as well as persistence and I was afforded my slice of fortune early afternoon when I flushed a female from a steep ridge - the only one seen in our day and a half here. This was quickly followed by prolonged views of Japanese Serow (resembling an oafish goat-deer hybrid), the animal seemingly just as fascinated by us as we were by it. Another new mammal here was Japanese Hare. 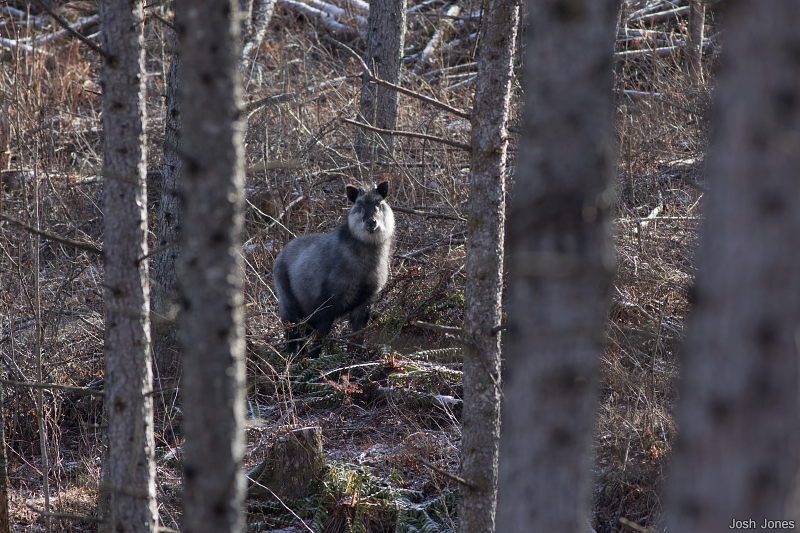 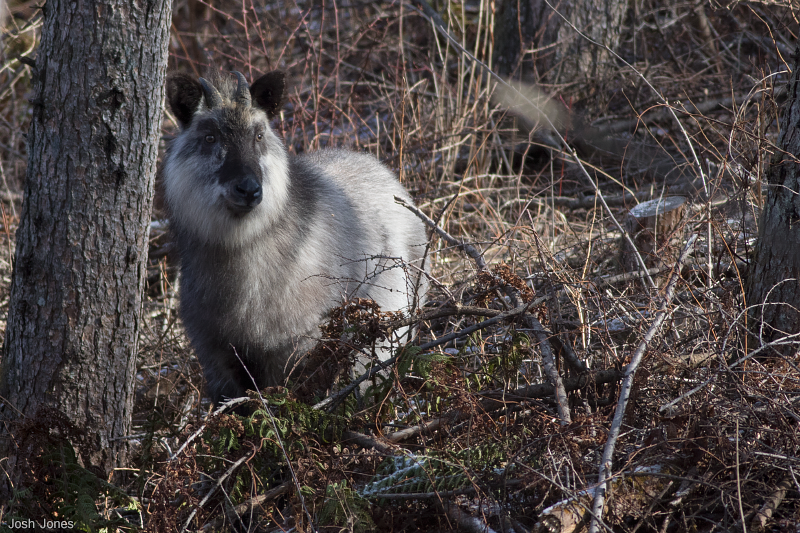 We found a group of at least seven Long-tailed Rosefinches in the main clearing in the bird forest, this including a couple of stunning males. Another group of 5+ was then seen back behind the 7-11 store late afternoon, but we couldn't find any Japanese Green Pheasants around the town. 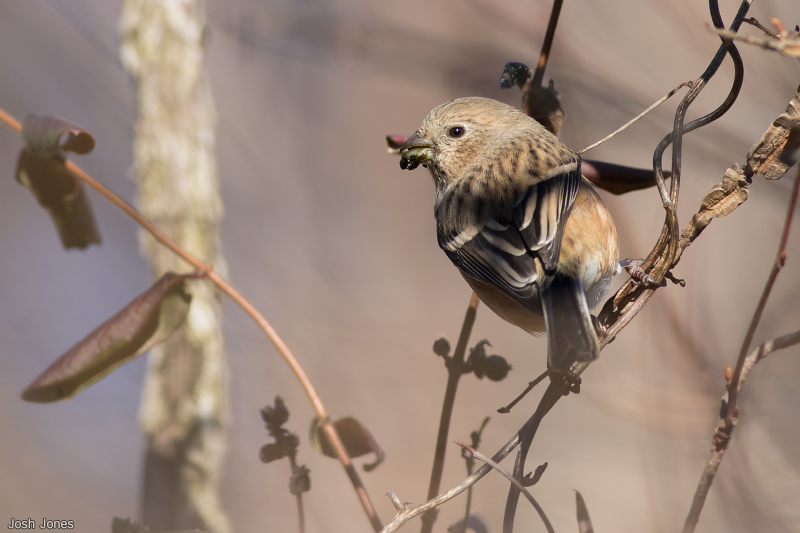 Other notable birds seen in the forest throughout the day included at least five Japanese Grosbeaks, a couple of Red-flanked Bluetails, more Brown Dippers, Bull-headed Shrike and at least one male Bullfinch (apparently grisiventris, but it seemed to have a slight warm flush to the belly c.f. rosacea) as well as all the expected species. We didn't get a sniff of the area's winter specialities (Japanese Waxwing, Pallas's Rosefinch and the accentor) - presumably the mild winter wasn't helping and a lack of snow meant no concentrations of birds. 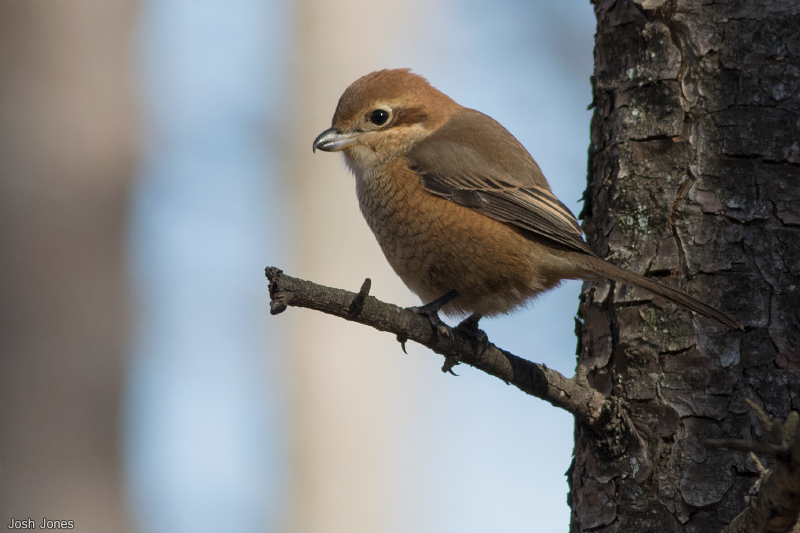 It had been a glorious and relaxing day in Karuizawa, one that I very much enjoyed despite the slow pace of birding. I think that in all honesty we could have stayed another night to give ourselves another early morning shot at the pheasants, but pre-trip planning dictated that we needed to pick up a hire car and drive the couple of hours over to Nakano for a bit of duding at the famous 'snow monkeys' the following morning. It took a while to get there due to our sat nav trying to lead us down various blind alleys but we finally arrived mid-evening. Snow-free Karuizawa had us fearing that the snow monkeys might not actually be set to a white backdrop but thankfully it was a few degrees colder in Nakano, and there was clearly at least a bit of snow on the ground. 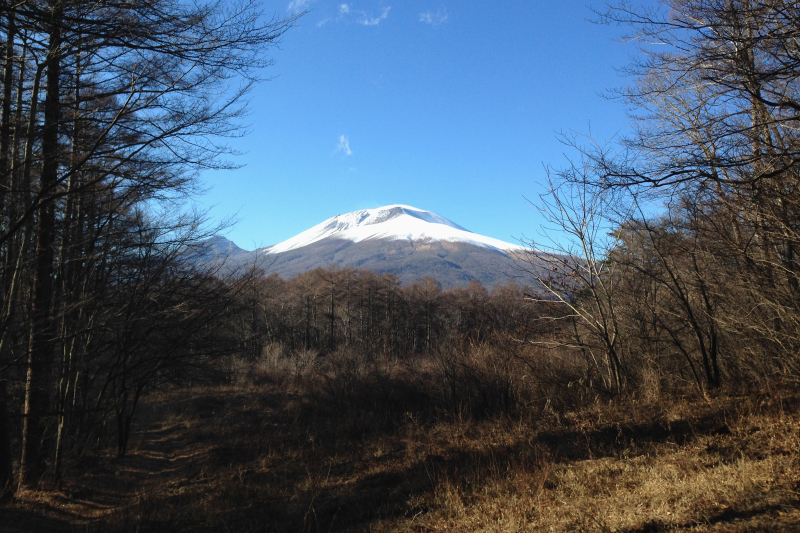