During the trip, we tried on spec for migrating raptors a couple of times. The first of these was during the morning of 4th, in the hills some 17km west of Marsa Alam on the road to Edfu. Brought to a standstill by a number of very close Steppe Eagles either sat on the ridges or in acacias, we decided to spend a couple of hours in the area to see what went through. 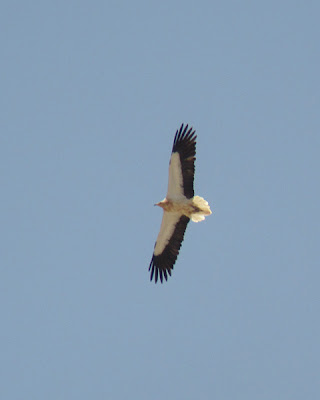 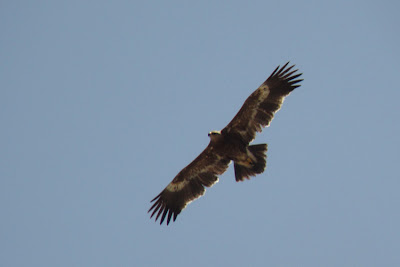 Adult EV and immature (2cy?) Steppe Eagle
At least 200 Steppe Eagles (and smaller numbers of Black Kites and Brown-necked Ravens) appeared to be loafing on the ridges around a nearby beduoin settlement, presumably attracted to waste. In addition, a number of 'kettles' of raptors drifted through - predominately Steppe Buzzards (in to the 1,000s), but also plenty of Black Kites, Steppe Eagles, and smaller numbers of Booted and Short-toed Eagles, Egyptian Vultures, Black Storks, 4 Cranes and a Long-legged Buzzard. Not bad for a spontaneous stop!

Our second crack of the whip came at El Gouna on the 8th. A juicy-looking ridge a few km inland of the golf course complex revealed plenty of Steppe Buzzards and Black Kites getting up and following it northwards. Between 08:45 and 09:45, we had plenty of the above plus at least three Levant Sparrowhawks (a tick for Rich!), a 3cy Eastern Imperial Eagle (tick for me!), Booted, Short-toed and Steppe Eagles, 18 Black Storks and a few Sparrowhawks. 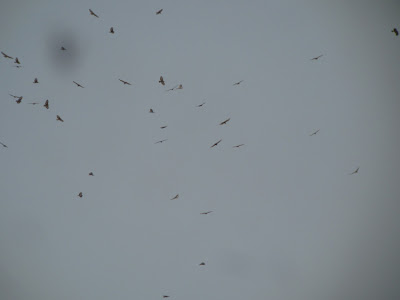