The sun is slowly setting to the west this evening on what is my last full day on the island. Today has been a little quiet, although yesterday ended up producing yet more great birds.

I started yesterday morning in Cantinho, spending four hours up there until I started to lose concentration and talk to the trees. Heading out on to Lighthouse Road, heard that David had relocated the Wood Thrush in Cancelas so spent some time scrambling around the top of the valley there, but saw nothing. Meeting Eric at da Ponte, we decided to head back towards the village when PAC alerted us to a couple of snipe in Lapa - turned out to be nothing interesting so the three of us ambled back along the road towards the miradour. Pierre then picked up a distant thrush in a cow field which transpired to be an American Robin; he called it just as I was about to speculate on the possibility of Eyebrowed Thrush...! The twitch soon formed and the bird showed well - below are my digibinned efforts: 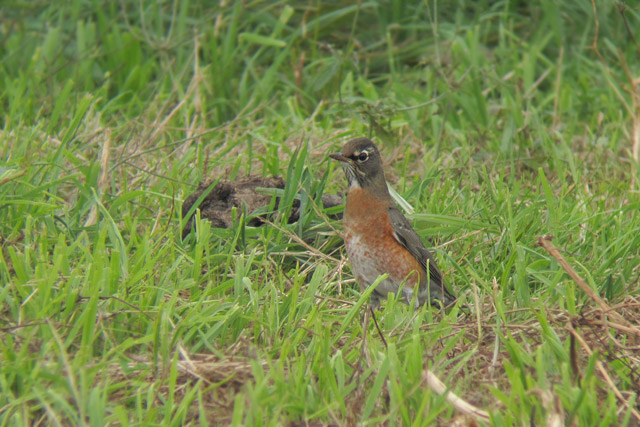 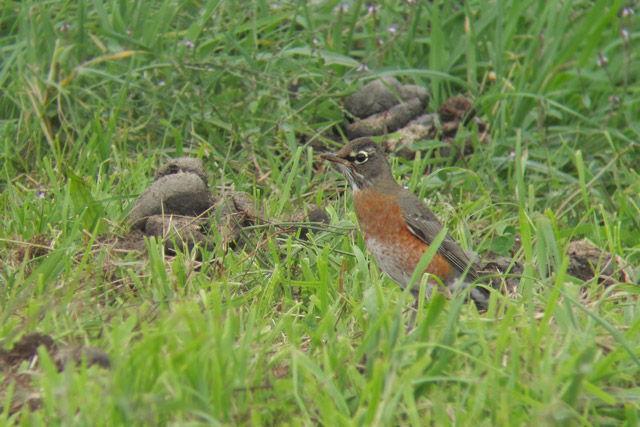 Leaving the thrush, PAC and I once again continued back towards the village only to be called back by a mystery passerine flushed by Eric and David from the roadside. The bird proved to be a Lincoln's Sparrow - seen well only by me (the flusher from the field) for two hours until it finally returned to its favoured tamarisk and most enjoyed decent views. My final act of the day was checking out the American Herring Gull, which was still blogging about at the west end of the runway and looking decidedly healthier than the evening previous.

This morning, there were big blue skies and the wind had completely dropped, so Eric and I headed up the caldeira. I flushed a Wilson's Snipe twice from the north side and, having never seen the taxon before, was genuinely surprised at how obvious the bird was. The white trailing edge to the wing was almost non-existent, the underwing was so heavily barred it looked dark, and the flanks were also extensively and densely barred. I also saw the bird land on the deck, and had decent views of it running around on the floor before it found a little hole to creep in to - remarkably cold-looking compared to the 40+ Common Snipe seen in the caldeira during the morning. The upperwing was very dark with very pale, crisp fringing to the upperparts. Eric and I later flushed a possible second bird which, although not as obvious, had plenty of features suggestive of delicata.

Other birds in the caldeira included a couple of useful Azores ticks - Pink-footed Goose and Osprey - as well as a drake Black Duck, 25+ White-rumped Sandpipers, the juvenile American Golden Plover, 5 Wheatears and a couple of female-type Teal although no sign of the recent Great Blue Heron.

The rest of the day proved pretty lazy in the pleasant weather conditions, with very few bits seen. Tried for the Parula/Yellowthroat combo and also the Lincoln's with no success, although the latter was still around. I checked the dump for the smiths but no sign, and didn't see much else around the village aside a Wheatear.

Willet on Sao Miguel today. Just hoping that we can fly tomorrow.