I'm a strong believer that Yellow-legged Gulls are one of the most misidentified species to occur in Britain and Ireland away from their strongholds in the southeast, even above species such as Black Kite and Honey Buzzard. Regularly we read about large (double-figure) counts across much of the country in winter gull roosts, but should they really be that common through the winter away from the southeast?

Well, based upon my experience, probably not. Although it may be because of our geographical location in north Cambridgeshire, we tend to get as many Caspian Gulls in winter than Yellow-leggeds - i.e., not many. Away from the southeast, Yellow-legged Gulls are a bird of the summer, with the highest counts coming from June/July through to September, with numbers tailing off after that as they drift off south as winter advances. As I'm lucky to see one Yellow-legged Gull in the winter at Dogsthorpe, I do find it baffling when you see reports of 5, 10 or more from north Midlands reservoirs or the northwest. Perhaps I'm just not looking for michs in the winter but, in all honesty, it must be for a different reason - alot of these birds are being misidentified.

But the issue of Yellow-legged Gull misidentification is that it isn't exclusive to winter - it is happening right now, as I type this. Probably the most-commonly misidentified age class at the moment are this year's offspring, the 1cy birds. There seems to be a great number of people about at the moment who are simply re-writing juvenile gull identification. In the past week I have seen various sites/blogs/pages littered with juvenile Lesser Black-backed (and even Great Black-backed) Gulls that have been wrongly labelled as Yellow-legged Gulls. Many of these images depict fresh, heavily marked and darkish looking birds which, for anyone who truly knows 1cy Yellow-legged Gulls well will testify, is not the case with these birds by mid-August. Instead, Yellow-legged Gulls (as they were born and fledged perhaps a month or more earlier than British-breeding large gulls) are well into their moult to first-winter plumage right now. They are particularly striking, and are already much paler than they were a month or so ago. Claiming fresh juvenile Yellow-legged Gulls right now is fraught with danger as the vast majority of birds are well into their moult. The classic example I use is of this bird, photographed by Dick Newell in late August some years ago:
http://www.magikbirds.com/image.asp?title_id=811&show_thumbnails=True

And below is a 1cy bird I had today at Dogsthorpe Tip. Although not as advanced as the very striking bird in Dick's photos above, it clearly illustrates what people should be looking for in a 'juvenile' Yellow-legged Gull in mid to late August - a bird that, for all intents and purposes, looks more like a first-winter than a true juvenile. Note the extensive scapular moult with lots of second-generation scaps with the classic dark anchor shape on them, note how the head and underparts have already become so pale that they are predominately white, and also note the undertail - virtually lacking any dark markings/barring so typical of juvenile Lesser Black-backed and Herring Gulls. The coverts on this bird below are also still in pretty good condition; alot of michahellis right now have much more worn-looking coverts: 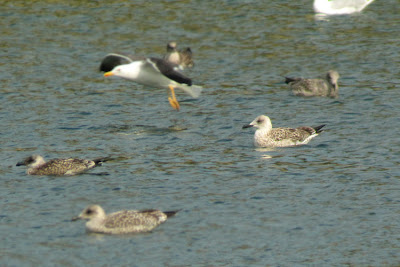 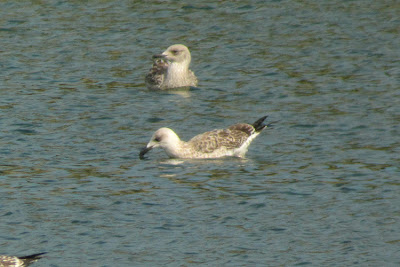 Although there is admittedly considerable variation in large white-headed gulls (and I concede some michs won't be quite so advanced right now), I would hope these thoughts are worth pondering before claiming the next juvenile Yellow-legged Gull. Any 1cy bird that still looks fresh at this time of year simply won't be a michahellis, and thus likely a Lesser Black-back.

I'm off on holiday for a couple of weeks around Europe and will be returning on 8th September. See you all then for more larid action, I guess.