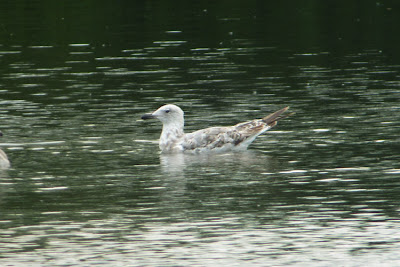 Went back to Peterborough today for the gulls. More tipping meant more gulls today; I would say 500+ on Dogsthorpe Tip and 300+ at Tanholt. Most were on the tips at both locations and difficult to see, though there was some turnover which allowed a decent proportion to be checked.

All in all I had six Yellow-legged Gulls; four (adult, 2nd-summer, 1st-summer & juvenile) at Tanholt and two (adult and 3rd-summer) at Dogsthorpe. The first-summer is shown above.

What did surprise me was that I also had a juvenile Lesser Black-backed Gull today; this is by far the earliest I've seen round here but it did look like it had just fallen out of the nest, presumably on a nearby warehouse roof somewhere in Peterborough.
Posted by Josh Jones at 17:40