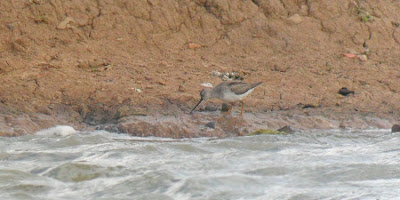 Terek Sandpiper is one of those birds which, although it occurs annually in the UK, I had previously never seen. Several birds in the past have come at the wrong time for me; I've either been abroad, at work, or without transport. In addition, many are very brief stayers, rarely lasting longer than a day. So the occurrence of a bird at Hauxley (Northumberland) certainly pricked my ears up on Saturday afternoon. However, with a rather big football match on the tv in the evening, I decided against making a move as I didn't want to risk missing some of the action.

It wasn't much of a surprise to hear that there was no sign of the bird early on the Sunday. I quietly thought to myself, "there goes another..."

So imagine my surprise when the bird was again seen on the wader scrape at Hauxley mid-morning. Quick change of plans from revision to driving and, via an offensive drive in to York to collect Staines (who had lost his car keys, useless tw*t), I was on my way. We got to Hauxley mid-afternoon; it was very breezy, but the bird showed well (above). A very charismatic and striking wader, always hurrying around feeding. Love that bill as well!

A few Roseates were seen out towards Coquet Island, but we saw little else during the rest of the afternoon. The Great White Egrets weren't at Castle Island when we stopped in on the way back south. Got back to Sheffield for 19:30.
Posted by Josh Jones at 23:51