On Deeping High Bank I had 5 Goosanders, 11 Bewick's and 2 Whooper Swans. The river was completely frozen save one or two duck-filled patches like this: 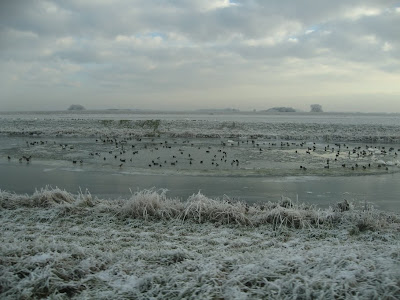 Baston Fen and my local patch (Baston & Langtoft Pits) gave a further 8 Bewick's and 3 Whooper Swans, as well as ringtail Hen Harrier, 3+ Short-eared Owls, a couple of noisy Curlews, Water Pipit and a few other odds and sods, which all gave for some excellent cold weather birding. 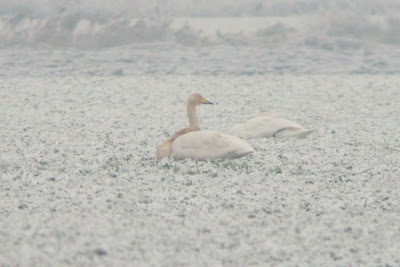 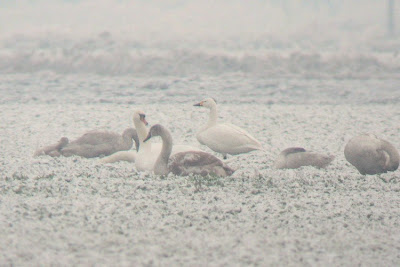 Today was slightly less productive in heavy snow showers and poor visibility, but at least it was milder (0 celsius rather than -5!). The Bewper Swan combination was still chilling out (literally) on the patch, and a nice finch flock contained a few Siskins (mostly Goldfinches). No redpolls. Gargh! I also had 4-5 Buzzards around, and 540+ Wigeon on the two small holes of unfrozen water on ARC Pit and the Old Wader Scrape. There are flocks of Skylarks everywhere.

A nearby game strip between Greatford and Baston produced alot of passerines this evening primarily made up of Corn Buntings, Yellowhammers and Chaffinches, but I also had 2+ Bramblings and a redpoll over. Only had my bins and didn't have alot of time but will check it again in the next few days to see what else is lurking there.
Posted by Josh Jones at 17:51