Have had a really busy past few weeks; thankfully exams all over now (just got dissertation to sort out). Been at Download festival over the weekend so much more rock and metal than birds. The last mildly interesting beast I've seen was another nice bird just outside Sheffield; this extremely wet male Red-backed Shrike: 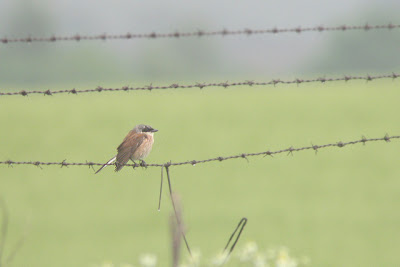 I realise I never got round to doing a write-up for the Ireland/Wales trip the previous week, but the Marmora's photos just about sum it up. Dipped everything but the Glossy Ibis in Ireland (that was meant to be no more than filler material anyway), and also missed the singing Ibe Chiff in Wentwood Forest. However, news of a possible Marmora's Warbler up at Blorenge, near Blaenavon, perked me up as I drove home along the M4 - when it broke I was between Cardiff and Newport! So, as I was only 15 or so miles away, a trip was more than necessary to check it out.

Initial panic trying to find the site, but this subsided when I located the right car park with a slightly shocked, slightly thrilled-looking crew who still weren't sure they could believe their eyes and ears. On seeing photos, it was quite clear the bird was indeed as suspected.

Step one: get the news out.

A few frantic phone calls followed and the news went out, and Britain's twitching fraternity was mobilized and heading for Gwent. Problem now was that the bird hadn't been seen or heard for almost an hour. Then, by magic, a rattling sylvia song filled the air, and shortly later up it popped - fuck! Marmora's Warbler!! Massive relief all-round, and what a privilege to be one of the first to see this bird. The bird even indulged in a few song-flights, and appeared to be occupying a territory. Brown remiges readily aged it as a 1st-summer, but that wasn't the most important part of the bird - a beautiful yet small bird, slate-grey all over, prominent red eyering and long tail gave it real character. Then people started to arrive; the bird wasn't showing and there were shed loads of Whinchats and Tree Pipits all over the place.

Step two: lay down the law.

Seeing that the twitch was a recipe for absolute carnage, a message was quickly relayed to the news services to restrict birders to the road (which most people did, does seem a few have strayed since - shame on you).

Long and short was that the bird continued to show, on and off, very well throughout the afternoon until I left. At the time of writing (14th), it is still present and building a nest. Lovely stuff.
Posted by Josh Jones at 14:36