Today, the second half of October saved itself from being brandished one of the worst for British birding/twitching in a long time. With such tasty delights as Caspian Plovers, Parulas, Long-toed Stint and a Chestnut Bunting thrown in for good measure, the rest of Europe has been outdoing Britain somewhat spectacularly since the middle of the month. You only have to look here, here or here for a mouthwatering array of tasty delights from elsewhere within the Western Palearctic.

So, just when you're expecting some monster bird from the west, Siberia and Asia seize the opportunity to remind us they're still there, and deliver an Eastern Crowned Warbler to the coastline of County Durham. Originally identified as a Yellow-browed, it's true identity was revealed when photos appeared on TurdForum showing a crippling, stripy Arctic Warbler-like beast.

Not wanting to mess around, I got in touch with old favourite Marc Read, who promptly set off from Sussex. Arriving in Sheffield a short time after 03:00, we were soon on the road once more, and arrived in South Shields (Durham) shortly after 05:15. The skies weren't all that overcast, and I decided to prepare myself for the strong possibility of a dip - this species has previously been notorious in the WP as a one-day wonder. It was therefore a surprise when at 07:35, I was awoken by a call from Marc informing me that it was still in the same spot (I know, not on site for first light! What a joker I am), so I dragged myself out of bed (car) and down to Trow Quarry. Through sleep-induced blurry eyes, I had my first glimpses of this most attractive of phylloscs. Olive-green upperparts with lime-tinged wings, a heavy bill, off-white underparts, double wingbar and, most strikingly, bright creamy-yellow supercilium and crown stripe contrasting with the dark grey-green lateral crown stripes. Behaviourally, it was reminiscent of Arctic Warbler - sluggish for a phyllosc, reflecting it's large size. For the next two hours, it performed wonderfully (albeit on and off) in sycamores, at times porning it and generating a crescendo of "ooohs" and "ahhhs" from the gathered throng. A Yellow-browed Warbler was also knocking about, as were a couple of Blackcaps. 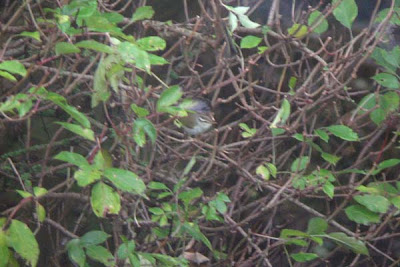 Filled with enthusiasm for the day, Marc and I decided it would be a good idea to go to Holy Island. My first Pallas's Warbler for about three years showed well at The Snook, and there were also a few common migrants about but no sign of the Radde's Warbler seen the previous day. 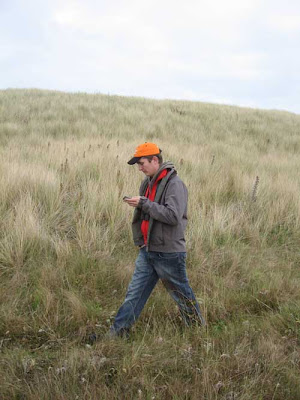 Back down at Druridge Pools, the day ended on a slightly sour note, with no sign of the Glossy Ibis making it the eighth I've missed since the influx began. But who cares, the warbler was the business - it's made it the autumn a bit less painful.
Posted by Josh Jones at 12:05