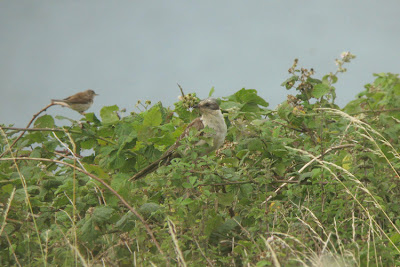 A photo of what was a new British bird for me (after missing at least two in recent times), it was remarkably elusive in the couple of hours I had spare to look for it. Feeding avidly on caterpillars, it was often accompanied by a juvenile Common Cuckoo. Perhaps more spectacular than this worn adult was the massive influx of ladybirds; some pockets of the coast looked orange at a distance! Closer study revealed a remarkable amount of cannibalism going on - the live ladybirds were feasting on their less-fortunate brothers!!
Posted by Josh Jones at 16:10