It's only taken me eleven months to sort these out, but here's a first photo-blog concerning the gulls seen during my Californian trip last February. This first installment will take a look at some of the juvenile Thayer's Gulls seen during the week.

I was actually quite amazed as to just how variable juvenile thayeri could be, with the trip really changing my opinion on these birds in a European context. In fact, ever since coming back from California, the bird I found (but identified and left alone as a probable dark Kumlien's) in County Fermanagh back in January 2012 has repeatedly come back to haunt me - it's pretty clear it was easily in range of Thayer's Gull. Anyway, I digress... here's a few shots, with notes on each featured bird following the images. 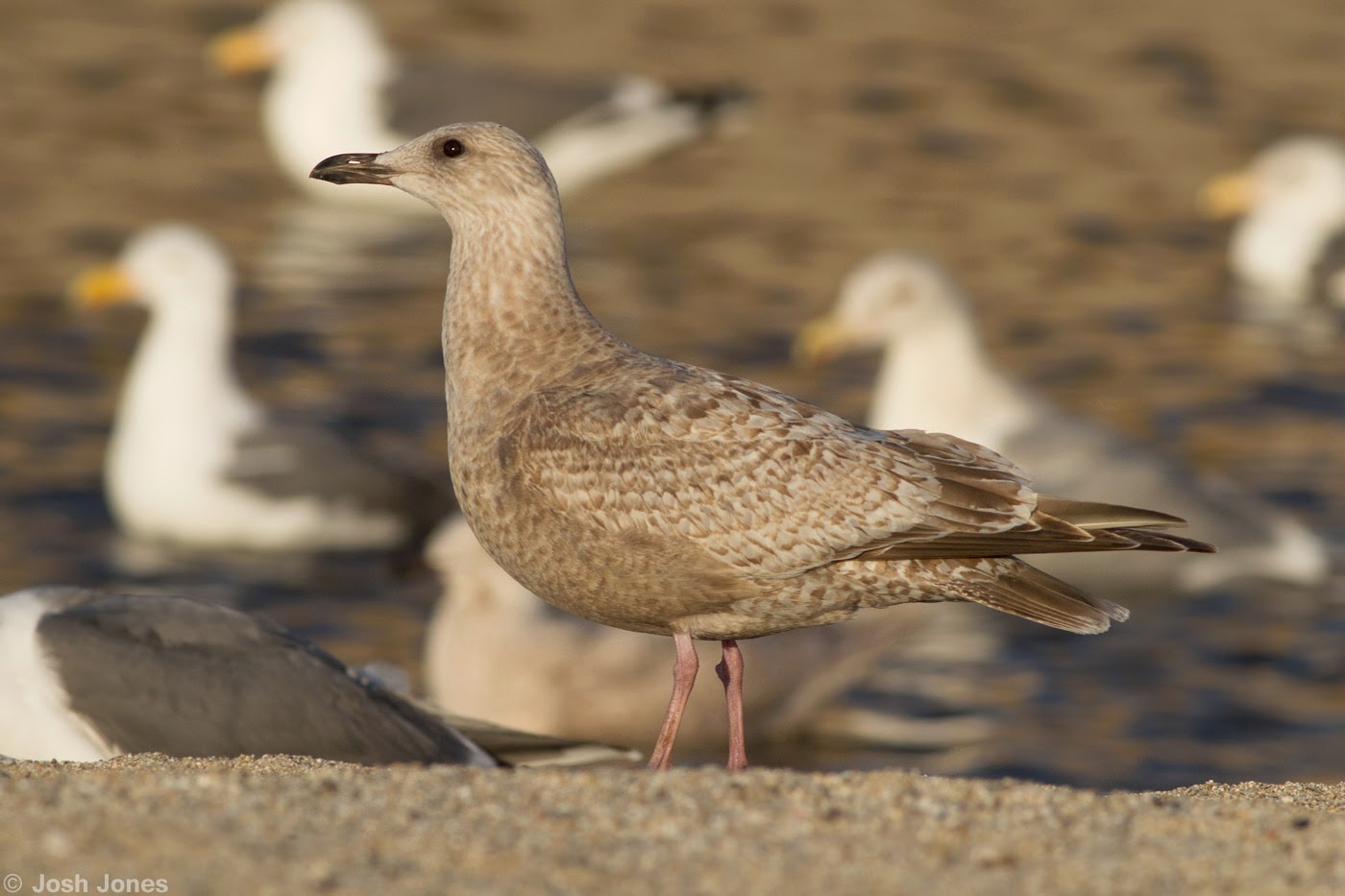 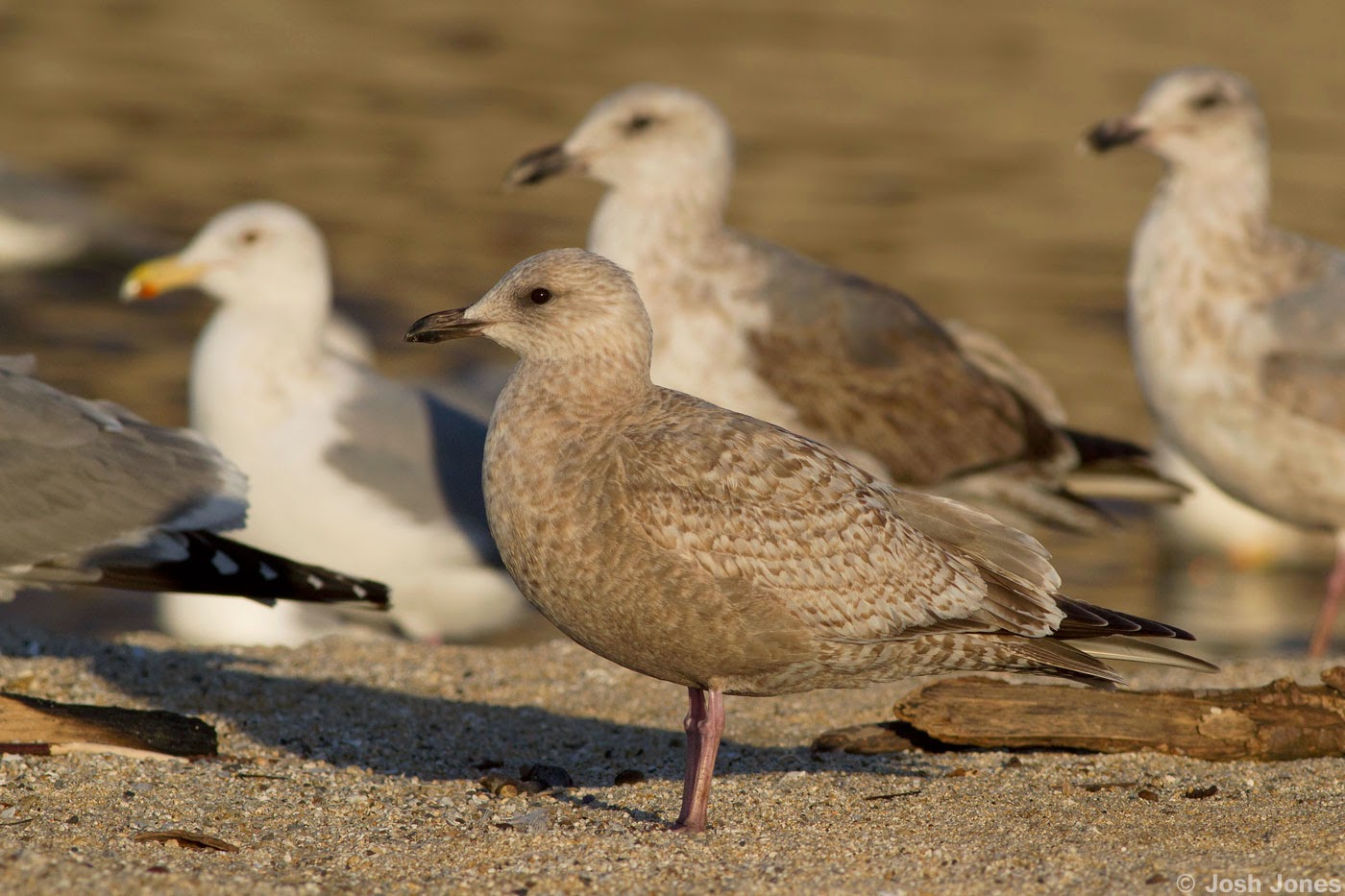 A heavy and thick-set individual, the bill is quite hefty and the bird possesses an almost Herring Gull-like structure. The upperparts are quite heavily worn and bleached. The tertials and primaries are the darkest parts of the gull, with the former lacking any internal patterning. Note the solid dark tail and heavily barred undertail and uppertail coverts. 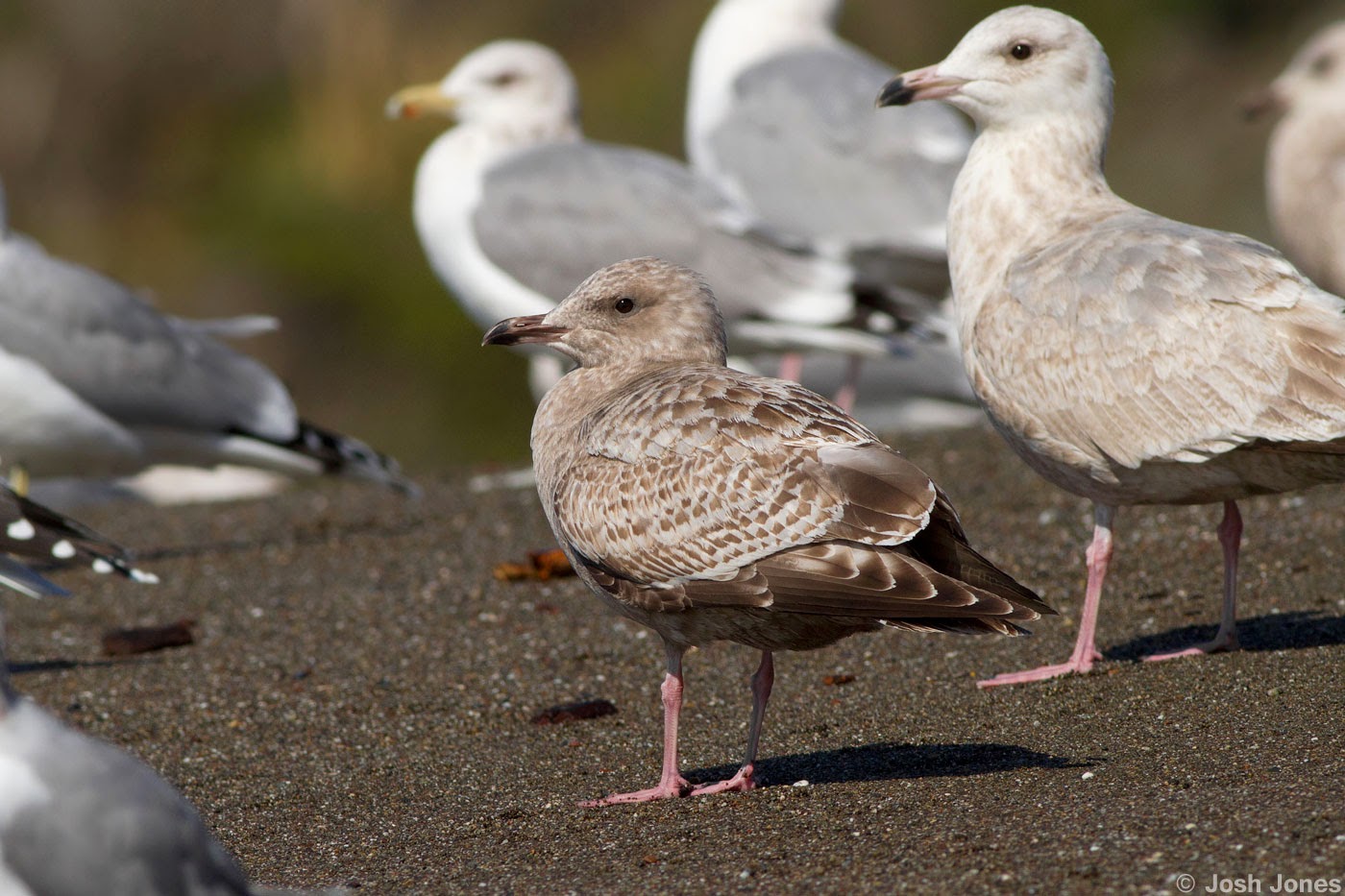 A relatively dark individual with dark brown, solidly marked juvenile tertials and dark brown primaries. The scapulars, though heavily worn and abraded, are dark-centred, paling towards the fringes. The bill is beginning to acquire a pinkish tinge to all but the very tip. 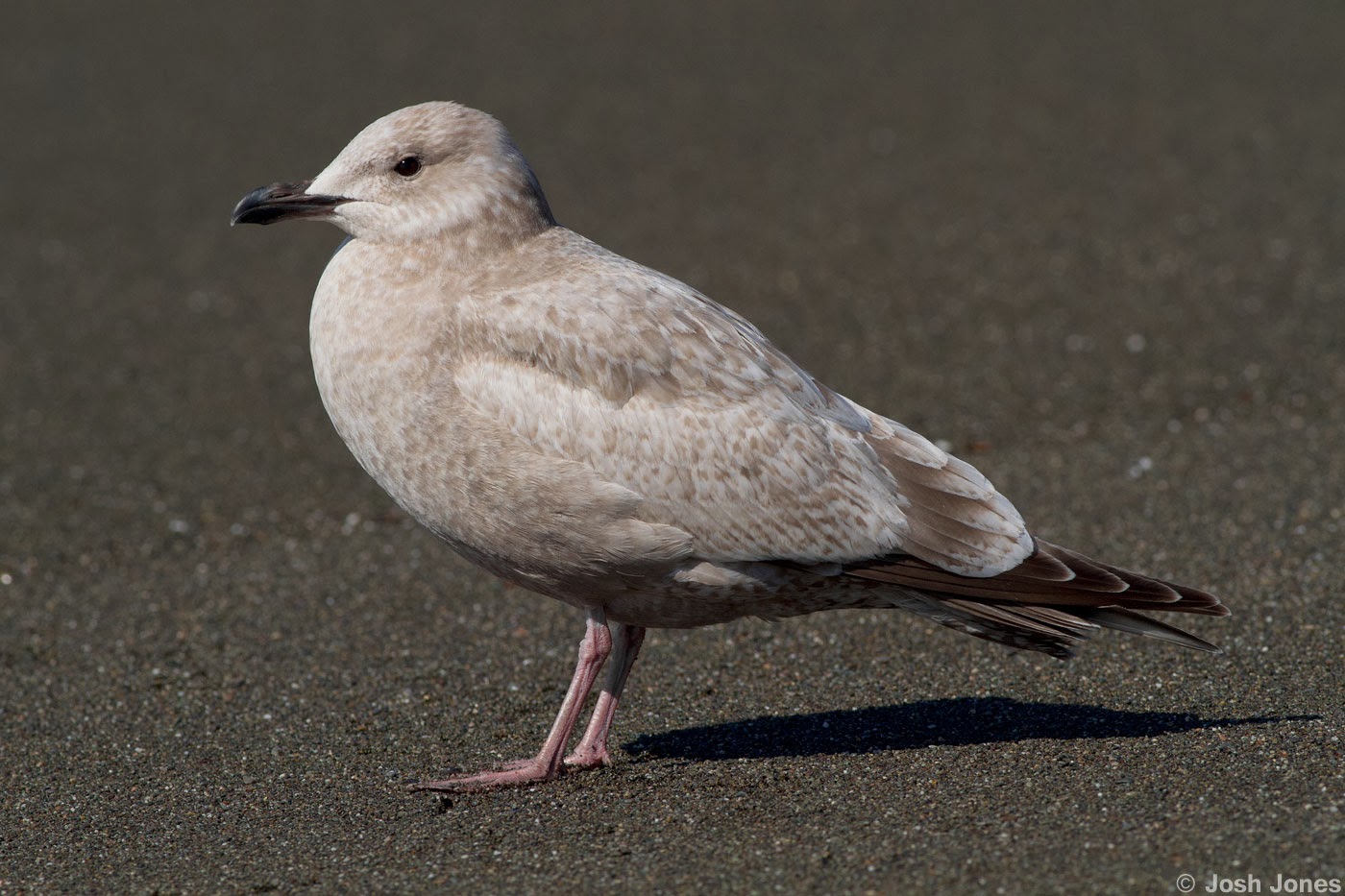 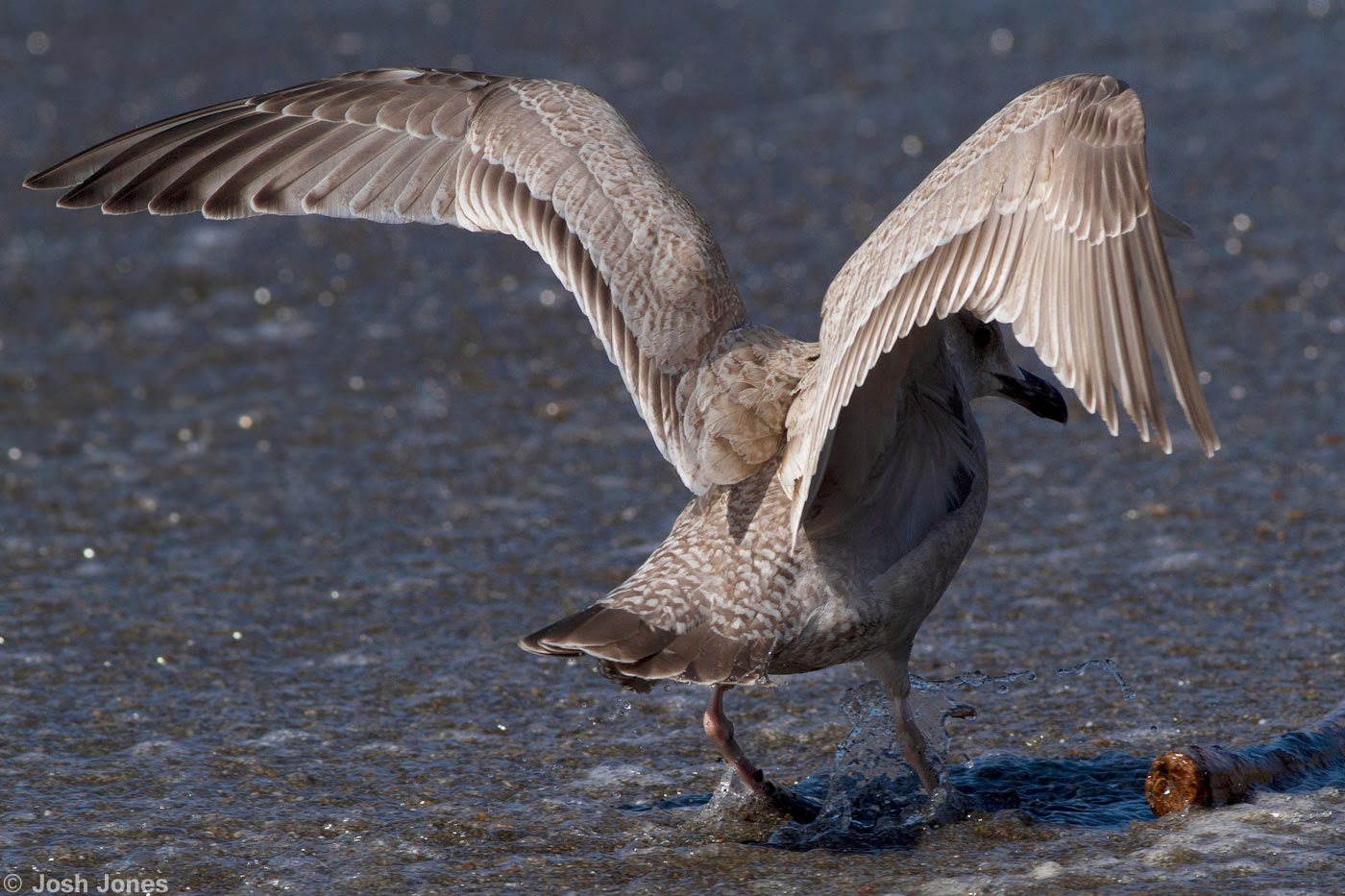 This is a particularly bleached individual, with rather concolorous pale upperparts. The tertials, though quite pale and extensively pale-tipped, are still some of the darkest brown feathers on the bird, along with the tail and primaries - the latter of which seem remarkably unaffected by the sun when compared to the rest of the plumage. The bill is still extensively dark.
An open wing shot of the same bird shows the obvious pale window on the inner primaries, pale inner webs of outer primaries and obvious dark secondary bar as well as an all dark tail and heavily barred rump. 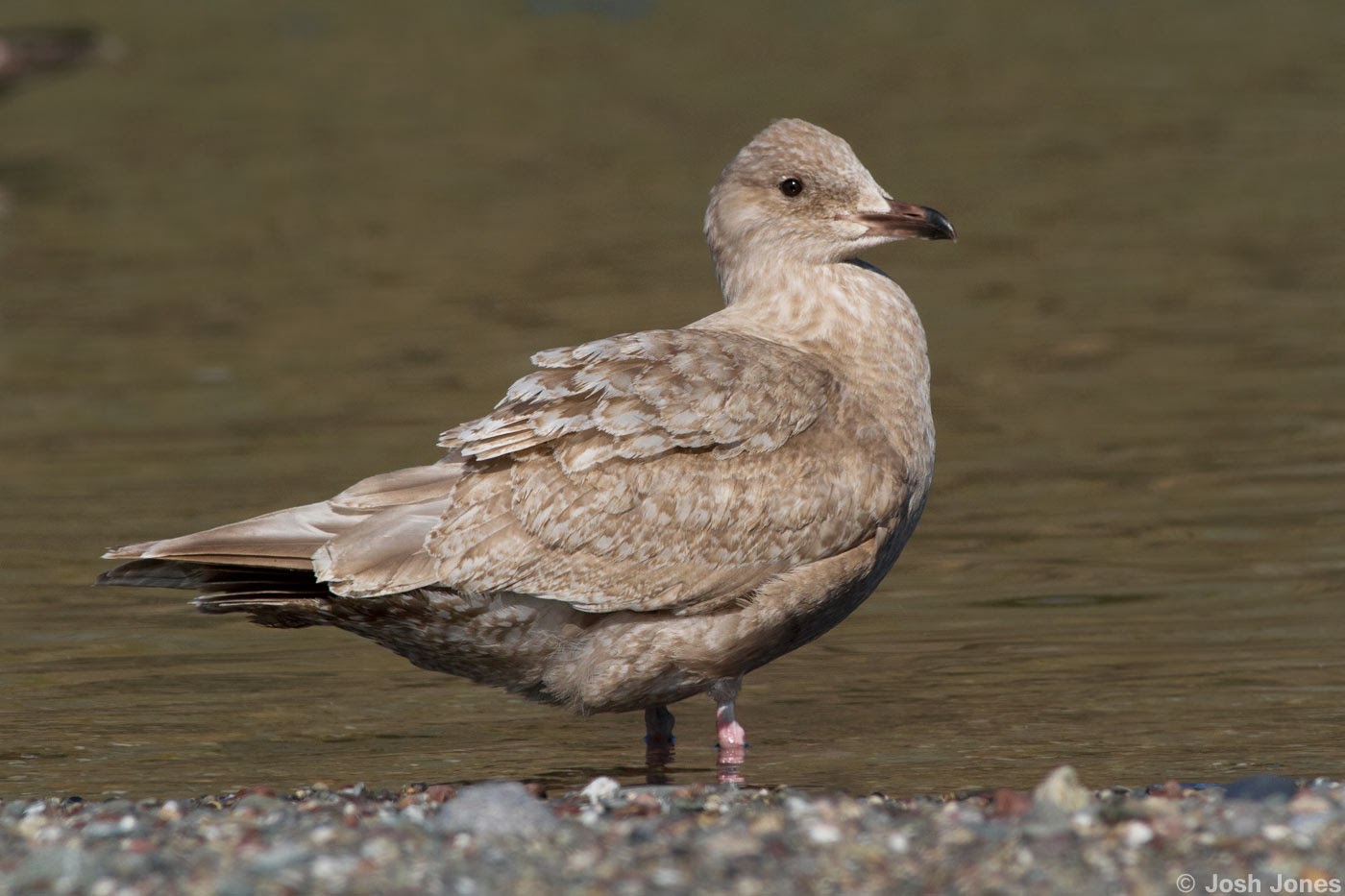 Another heavily bleached individual; birds like this are not uncommon after spending a winter in the Californian sun! The tertials are still very much uniform, though quite pale- the primaries (what is left of them!) are also a mid-brown. 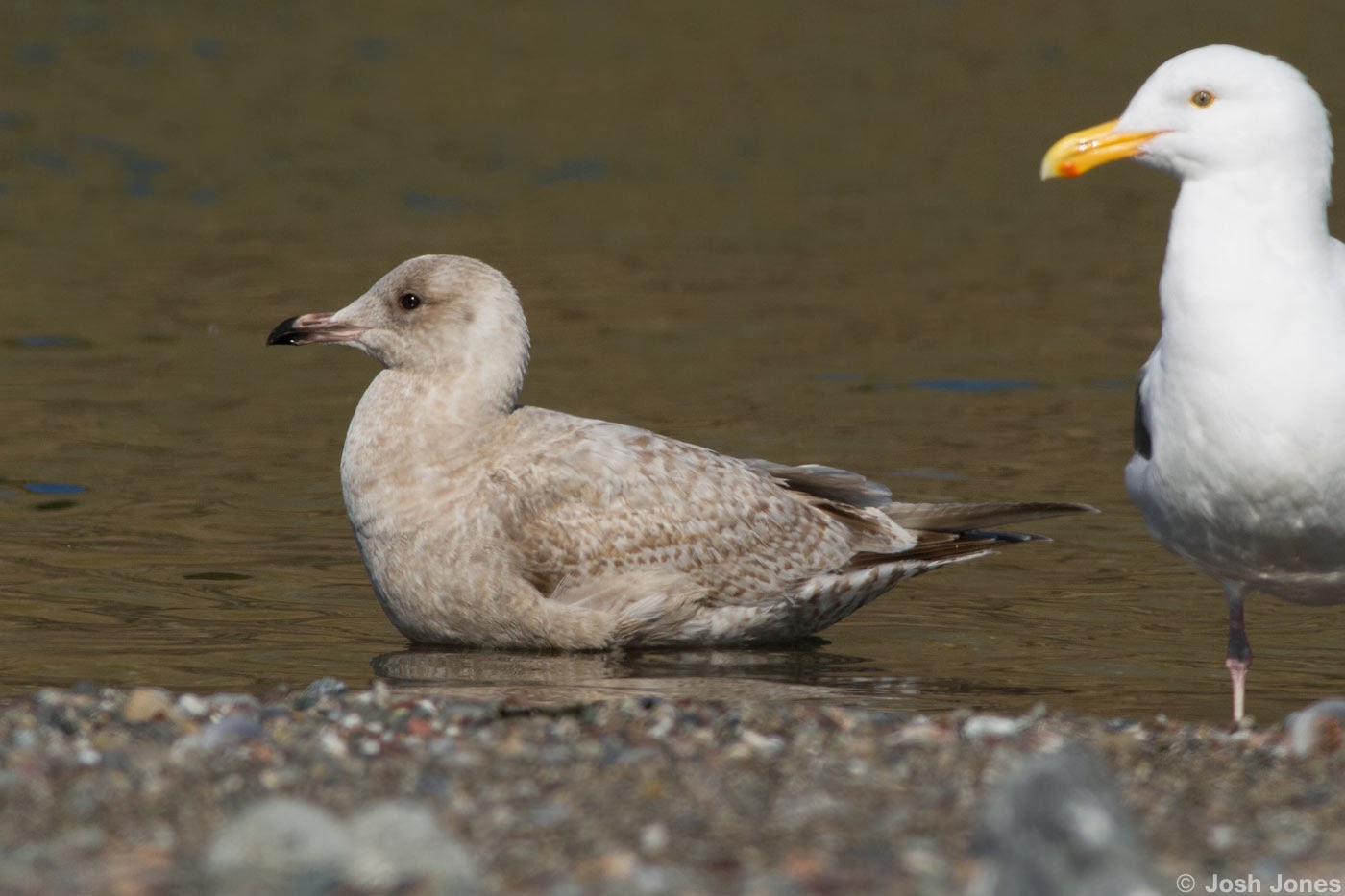 A pale and slender bird with distinctly two-toned bill and heavily bleached upperparts - would this be identified as a Thayer's in Western Europe? 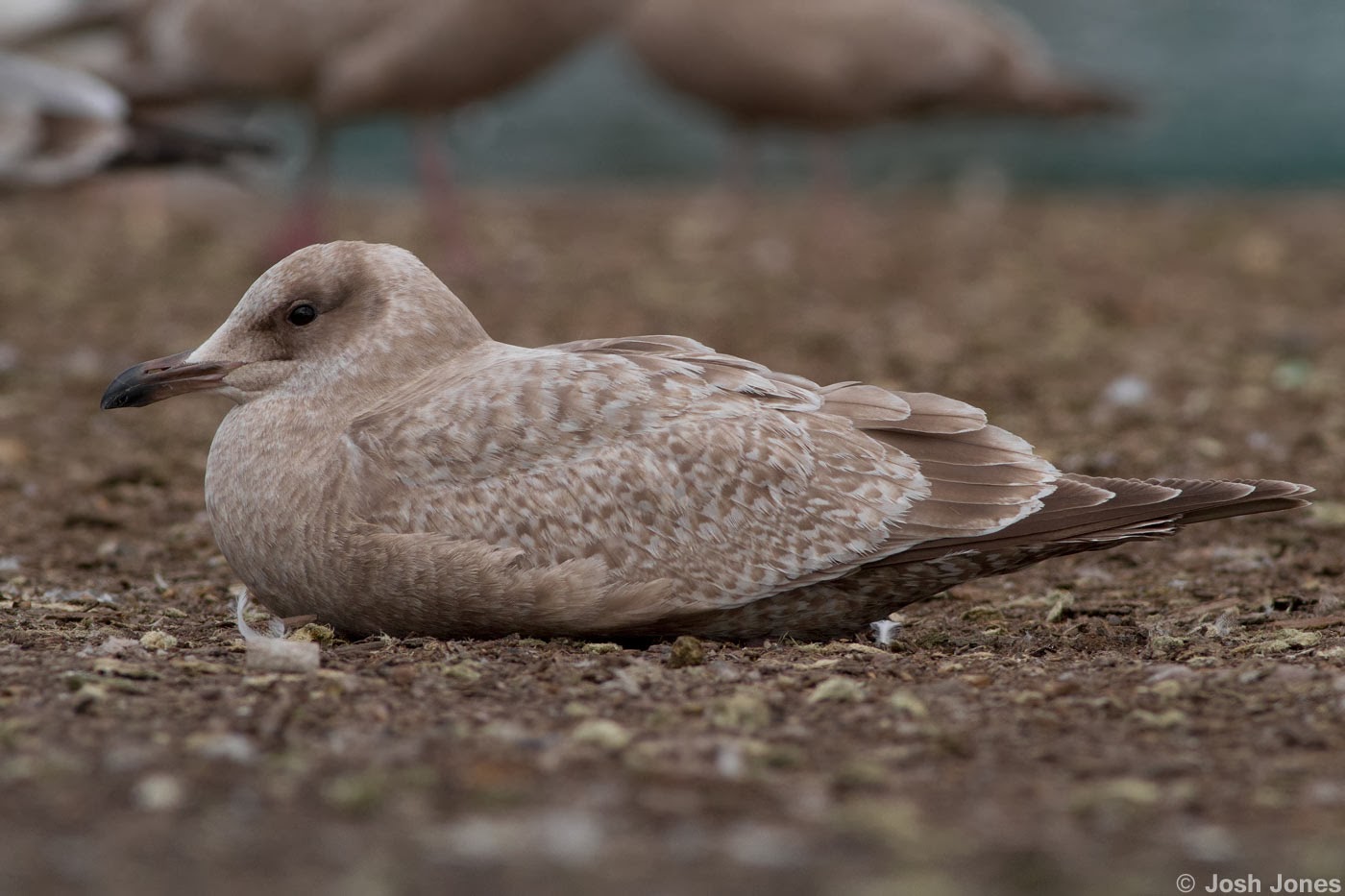 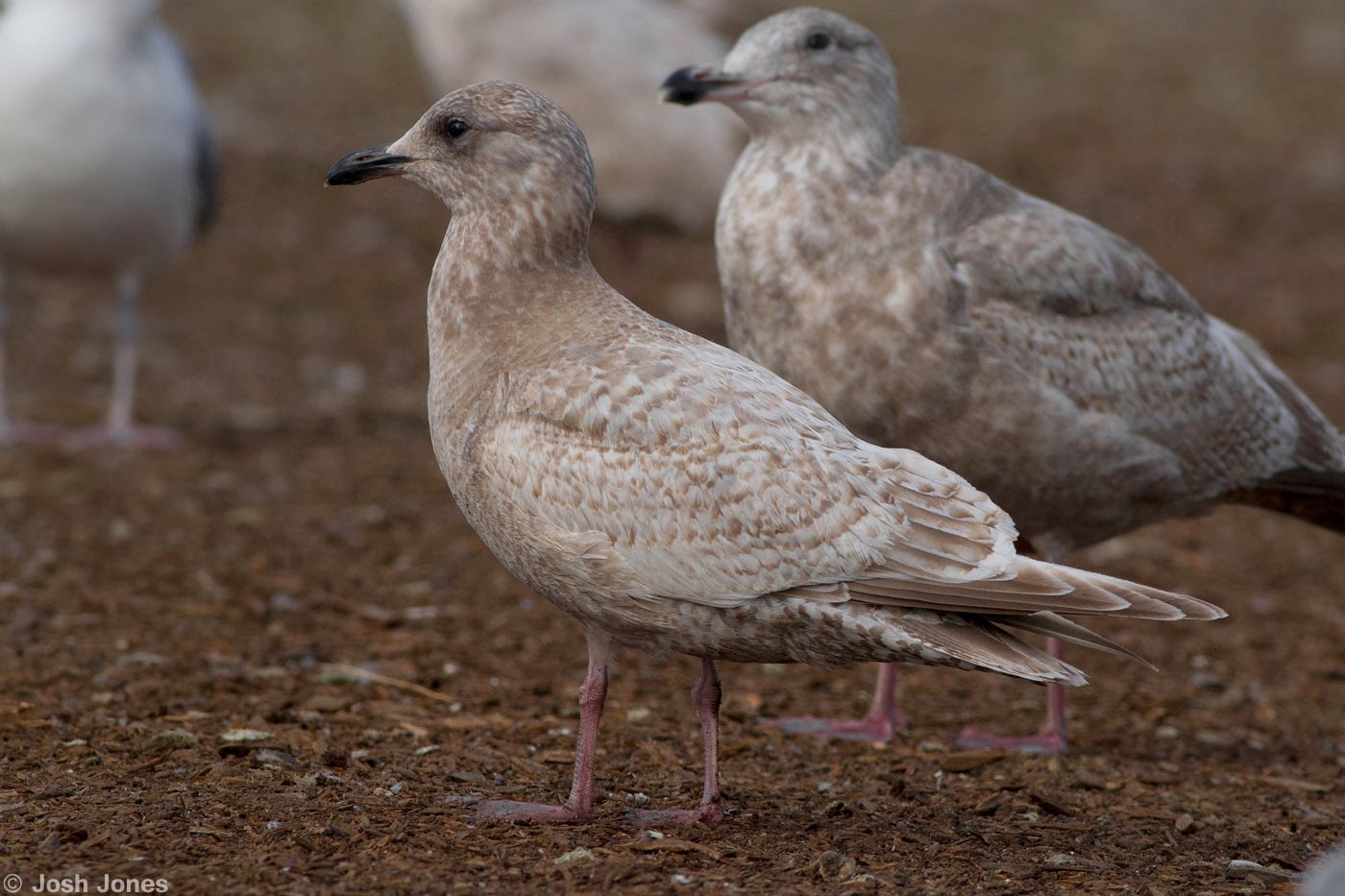 Dark bill and dark brown 'shawl', but otherwise with rather pale, heavily bleached upperparts - note how some of the inner greater coverts are almost entirely off-white! The tail, tertials and primaries are also particularly heavily affected on this bird. 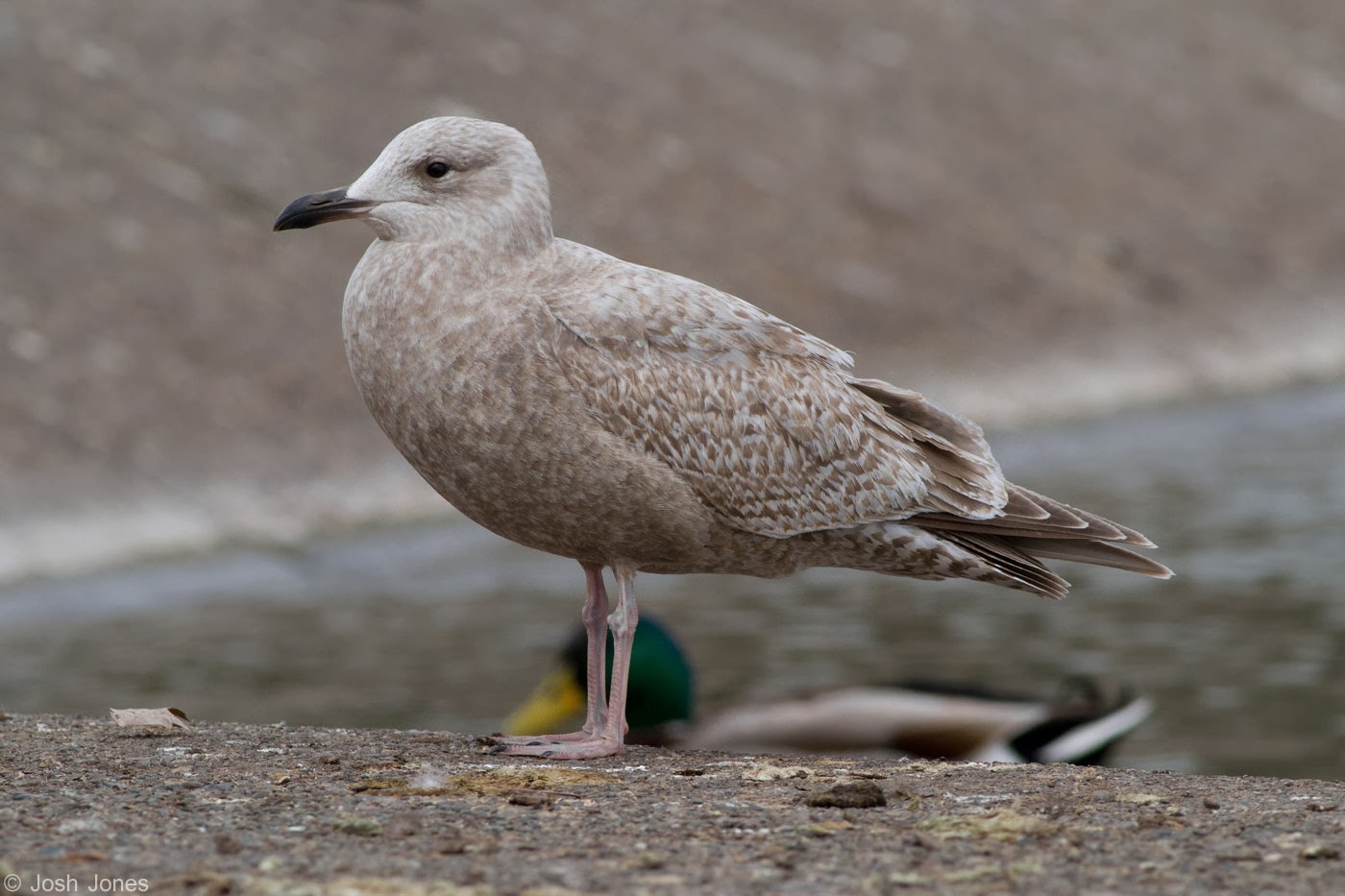 To me, this bird has more of a European Herring Gull feel to it (especially facially), and could get overlooked as such in Europe with the greyish-brown wash to the body and relatively sparsely barred undertail coverts. The tertials show some patterning at the tips, and the primaries - a dark brown - possess obvious pale fringes. 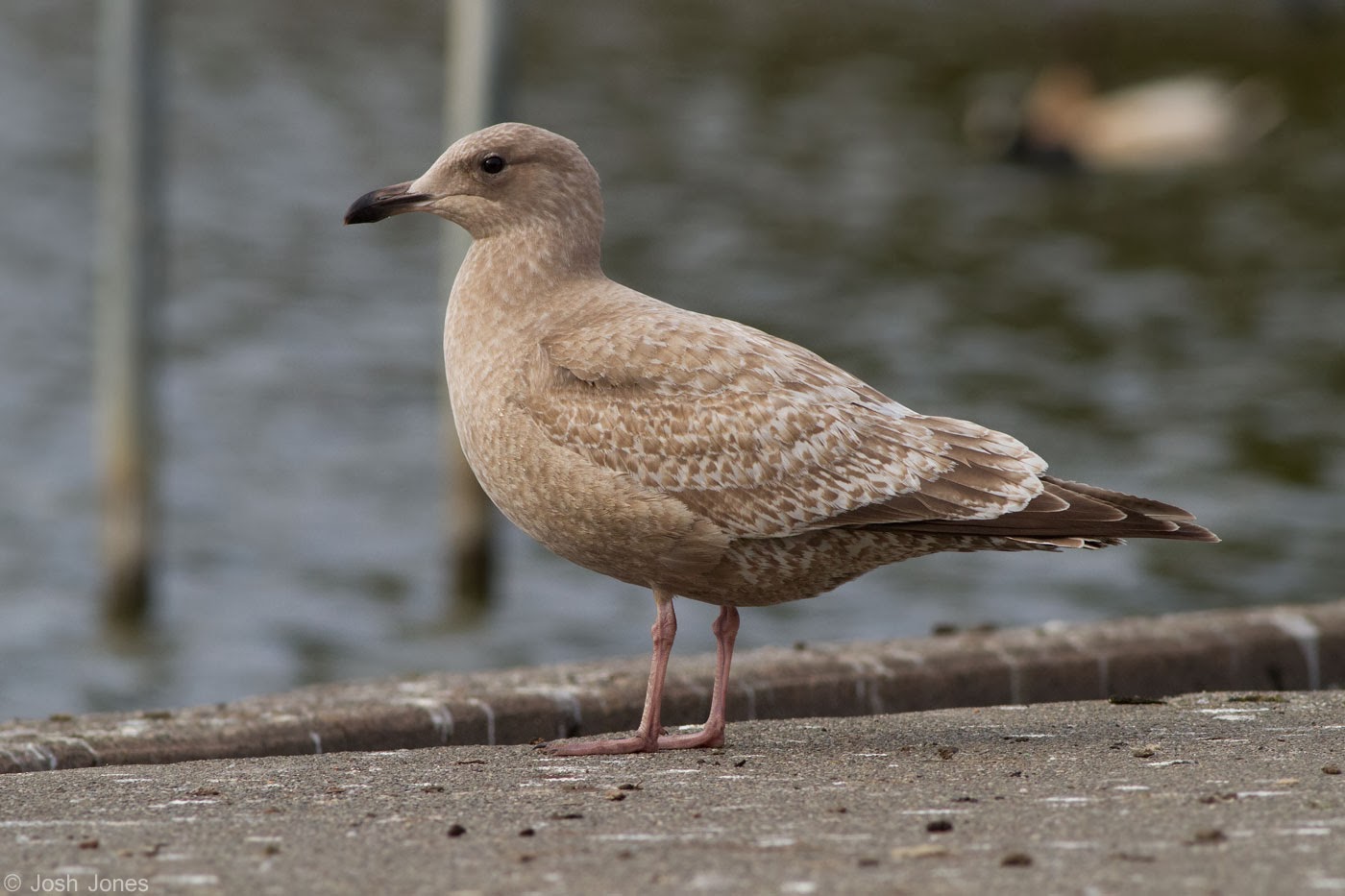 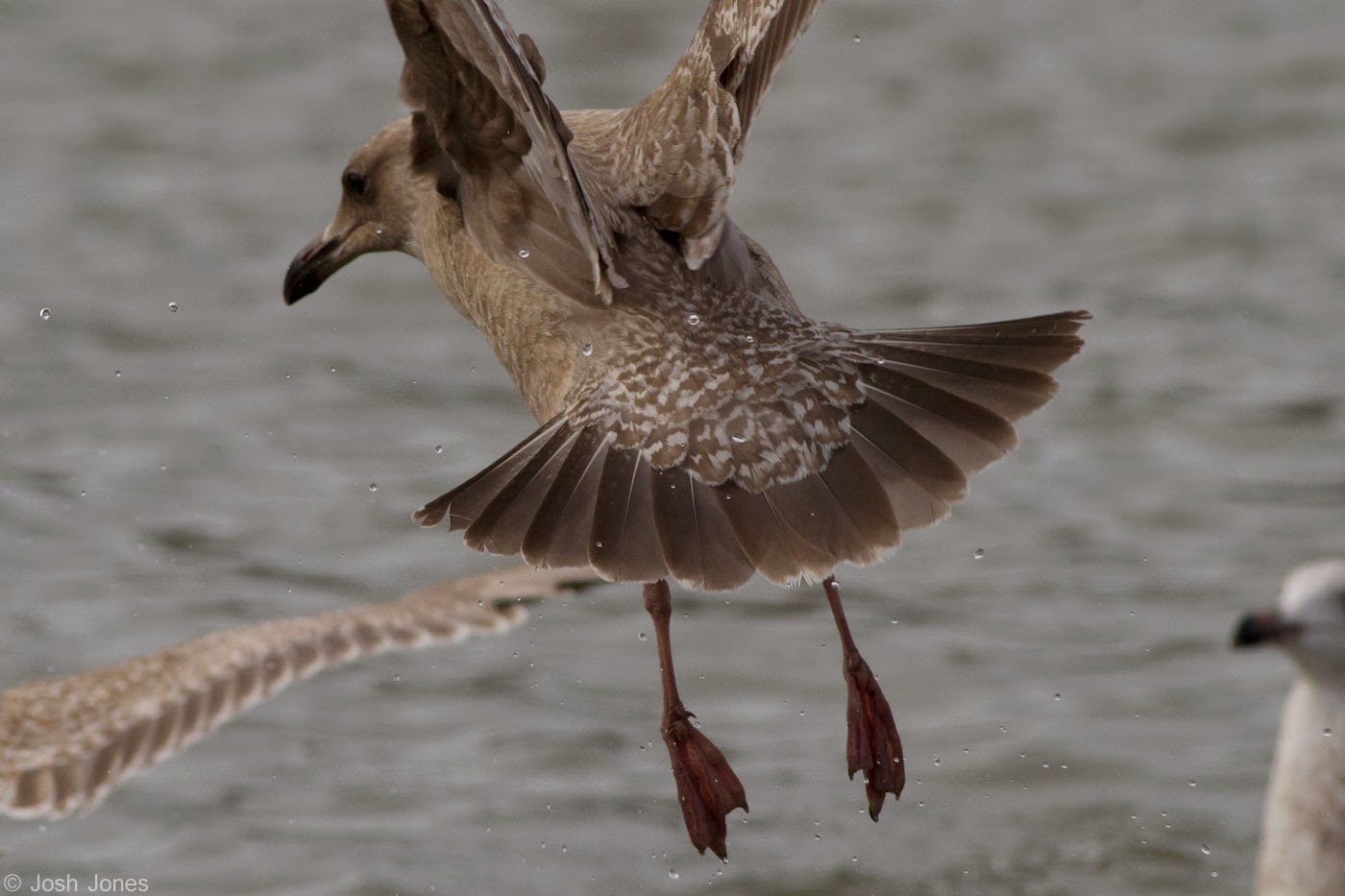 A much more distinctive individual to that above, with uniform brown underparts, dark centred juvenile scapulars, dark centred tertials (with patterning towards the tips) and dark brown primaries. The flight shot illustrates the heavily barred (and predominately chocolate brown) rump and uppertail coverts, the all dark tail and uniform chocolate axillaries. One of the nicest juveniles we saw! 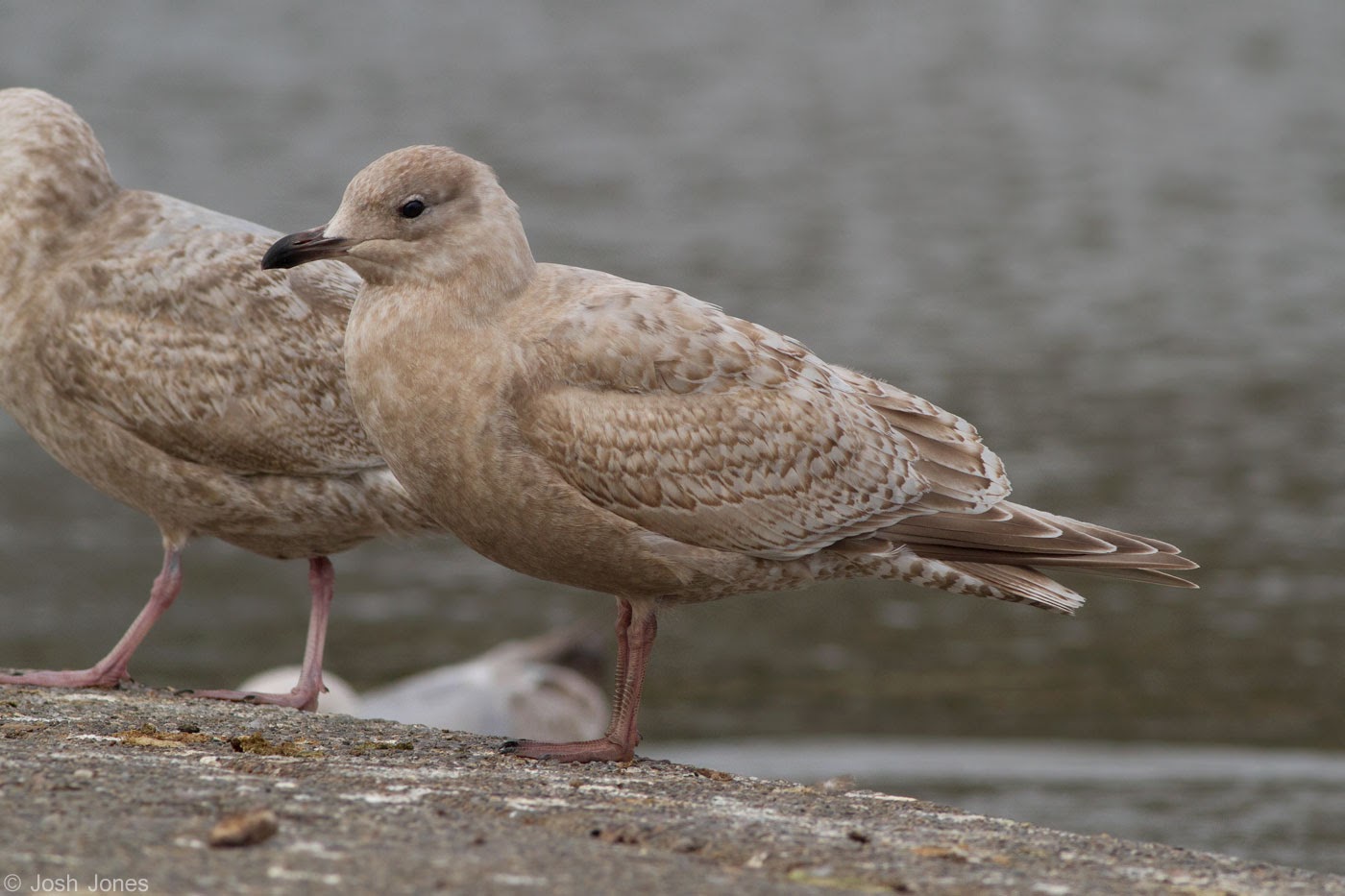 Another heavily bleached bird that is unlikely to be confidently identified in a Western European context - can Kumlien's Gull be ruled out, even in California? The scapulars are extensively pale with pale 'horseshoe' markings to the tips, and the coverts are also largely pale. However, the tertials are quite uniform (despite being pale) and the primaries are uniformly dark with pale fringing. The tail is all primarily dark, but too is heavily bleached. 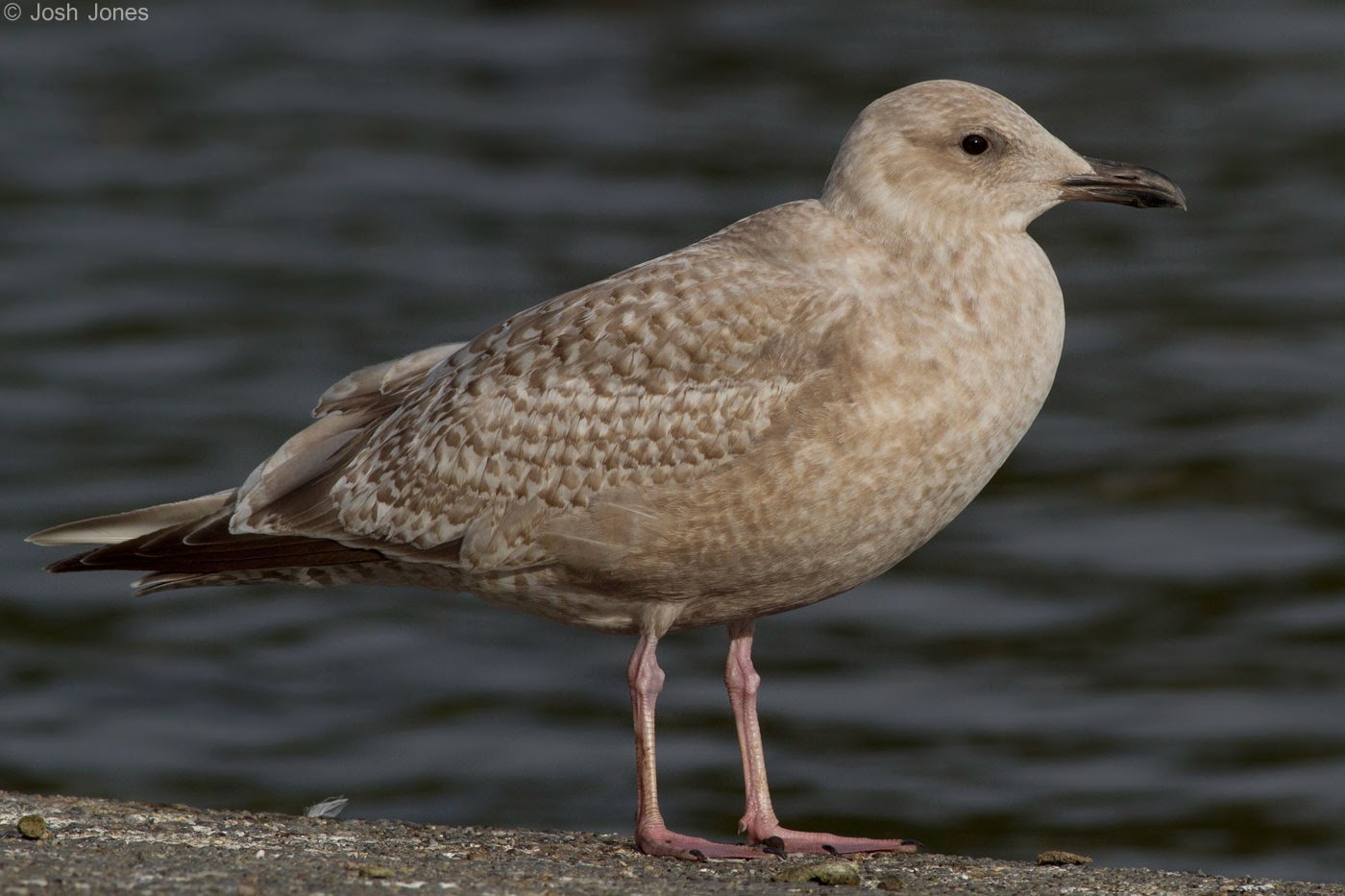 Here's another one that has an almost Herring Gull-like feel to it with quite pale (and blotchy) underparts. The undertail coverts aren't particularly heavily barred either. 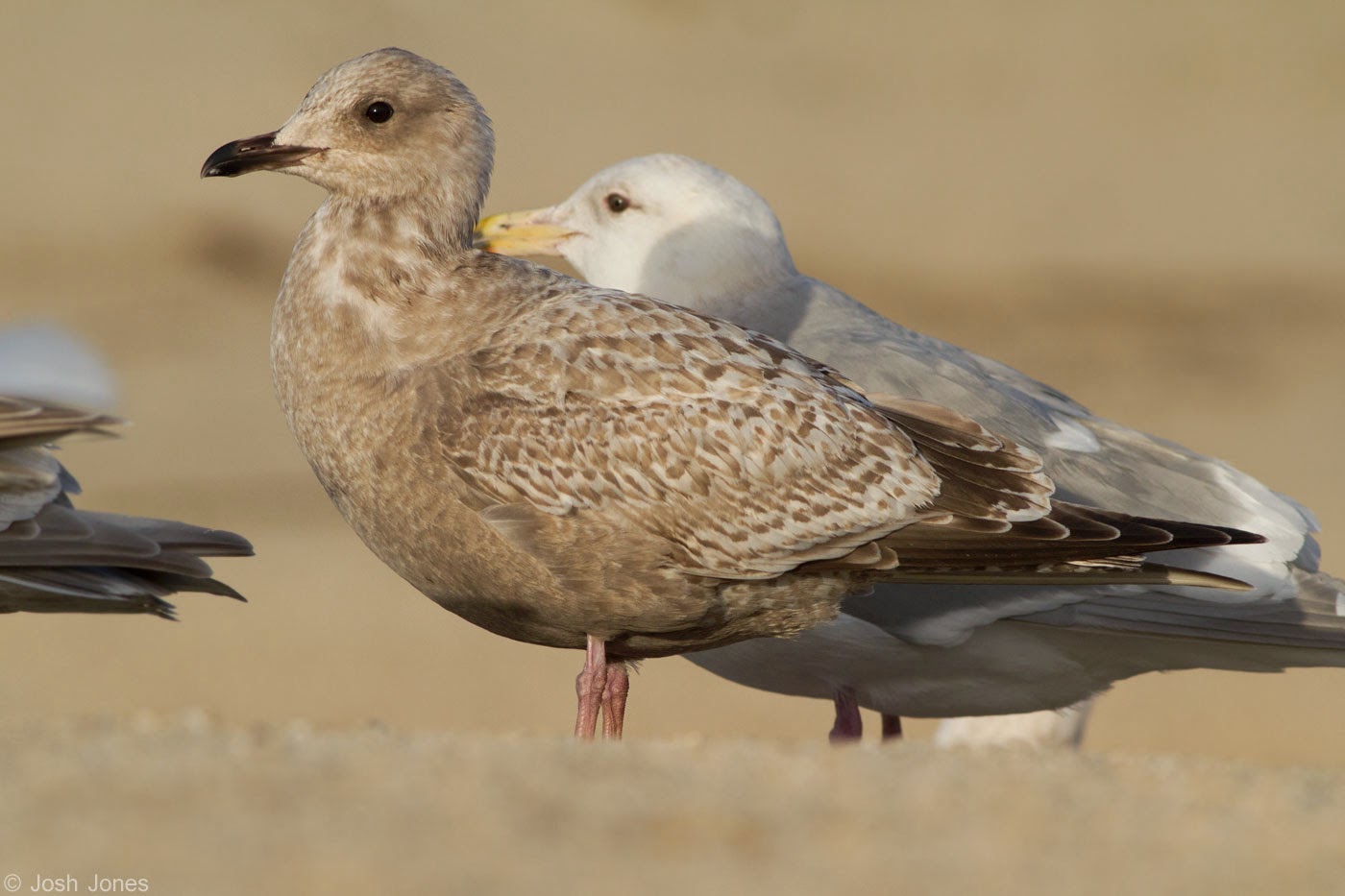 Again quite bleached, but a really nice bird - classic in all respects. You can just about make out the silvery quality to the undersides of the bird's primaries. 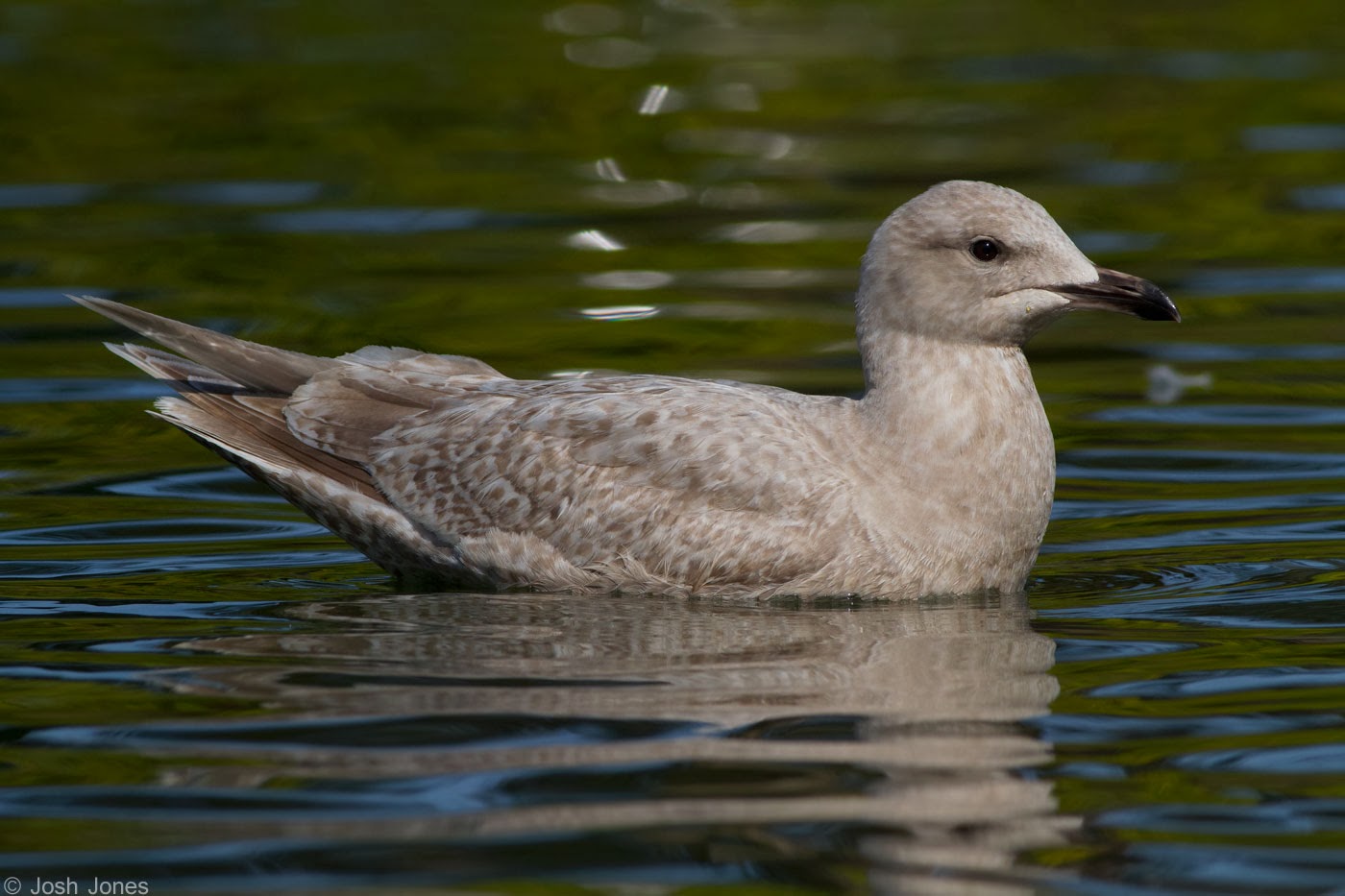 Yet another heavily bleached bird - the primaries, tertials and tail have all suffered quite considerably. That said, plumage is otherwise typical Thayer's Gull.
Posted by Josh Jones at 20:05