Back at the dump

It's approaching that time of year where the days are so short that it rarely seems to get properly light and, to boot, the temperature is abnormally low for so early in the winter season. With a calm day forecast, I decided to seize the opportunity for my first visit to Rainham since the summer, mainly to see what the deal was with tipping activity and where the gull numbers were at.

Gull numbers were fairly low to be honest, though this might be explained by the fact it was a Monday morning. I had 5-10 michahellis of various ages arsing around on the Thames, but no Casps. Bird of the day was a pretty smart 1cy that, to me, can be labelled a Glaucous x Herring Gull: 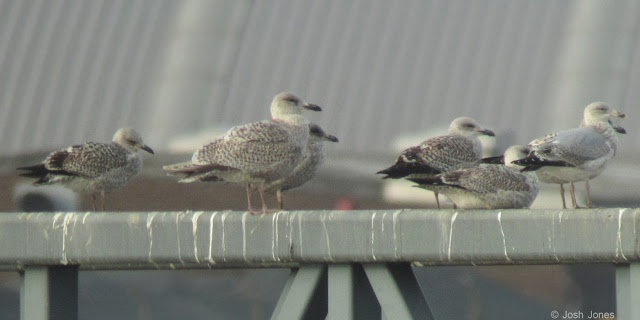 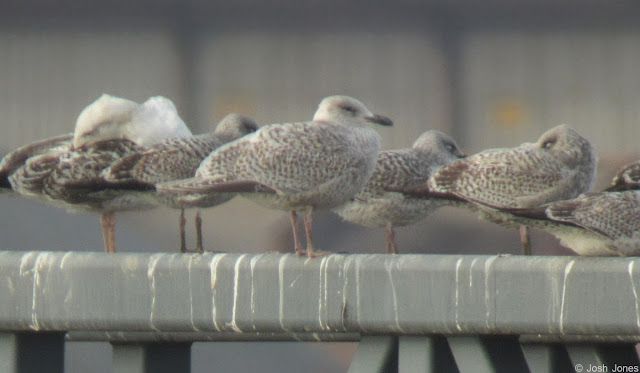 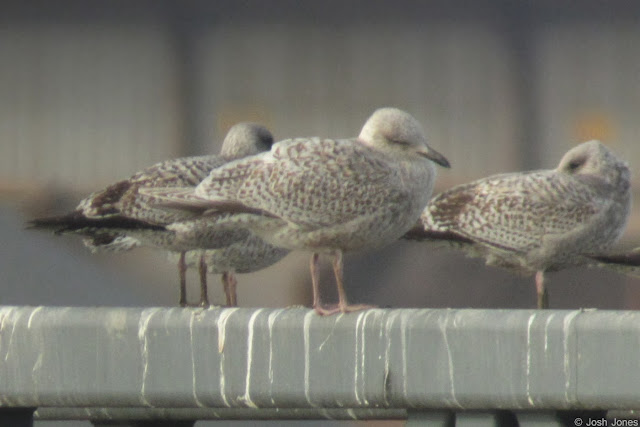 I'm pretty aware that argentatus can come pretty big and pale - indeed, I see such birds each winter (here's one from Peterborough). However, there's enough to suggest a hybrid in this bird beside its overall paleness: 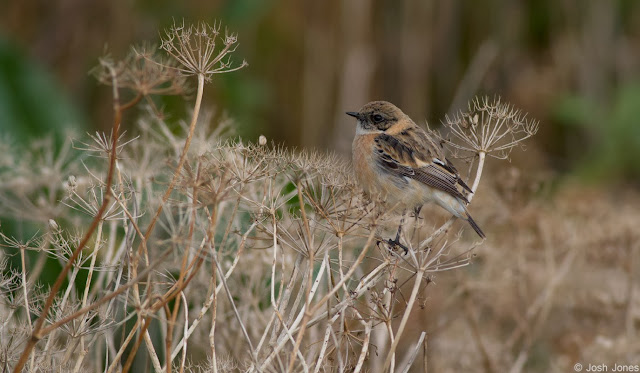 Dan and I had been keen to do something this weekend, toying with the idea of S France before settling on Cornwall earlier in the week. Our plans were cemented with news that a 'Siberian' Stonechat on St. Agnes was in fact a Caspian (hemprichii). As such, we teamed up with John Pegden and spent Saturday on Scilly, where I was finally able to lay to rest my penchant for dipping Sibe Stonechats in Britain. Irrespective of splits and ticks, it was an absolutely cracking little bird that showed to within three metres - yet another highlight of 2013 for me. I know I keep saying it, but I must buy an extender for my lens! 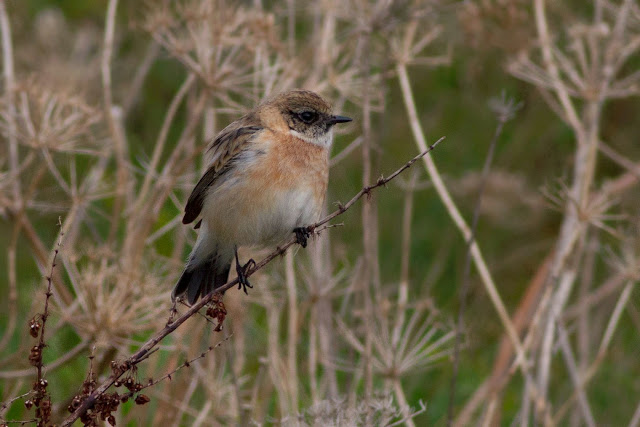 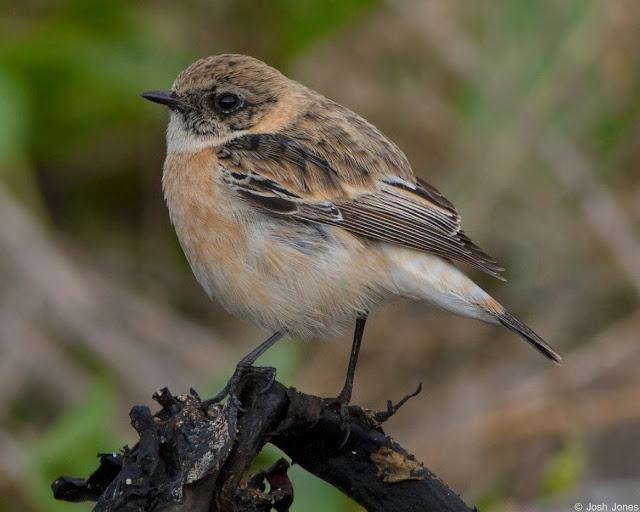 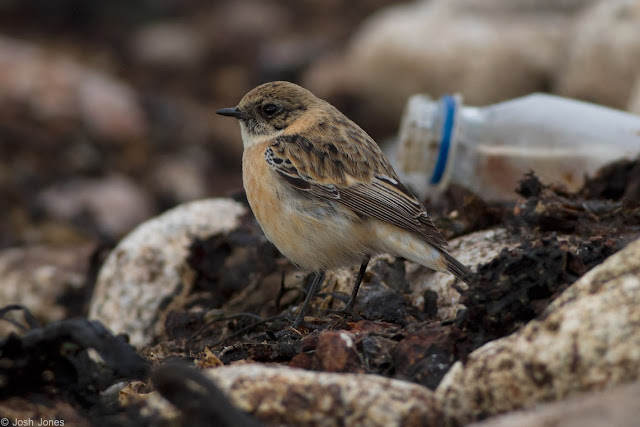 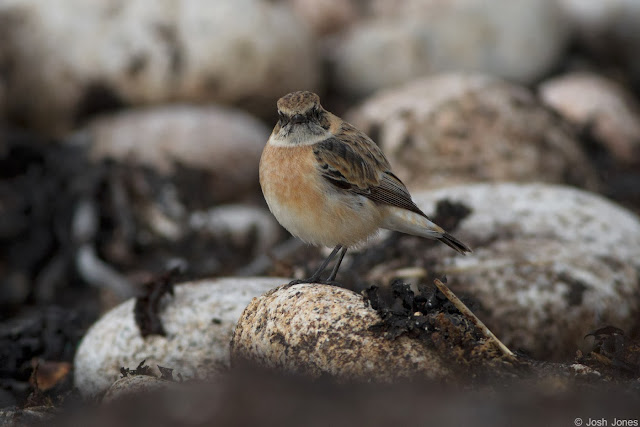 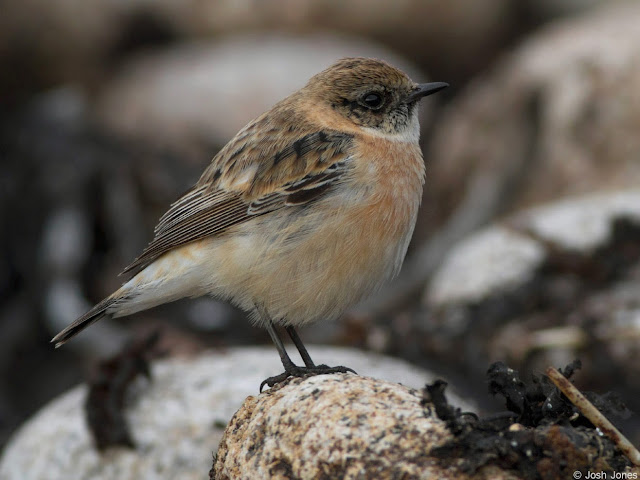 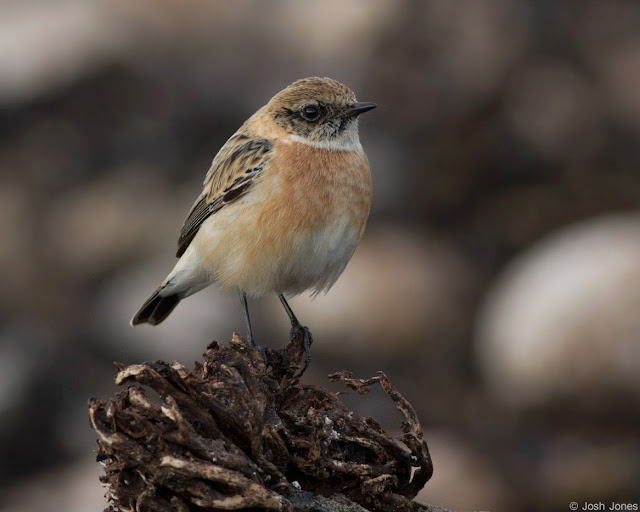 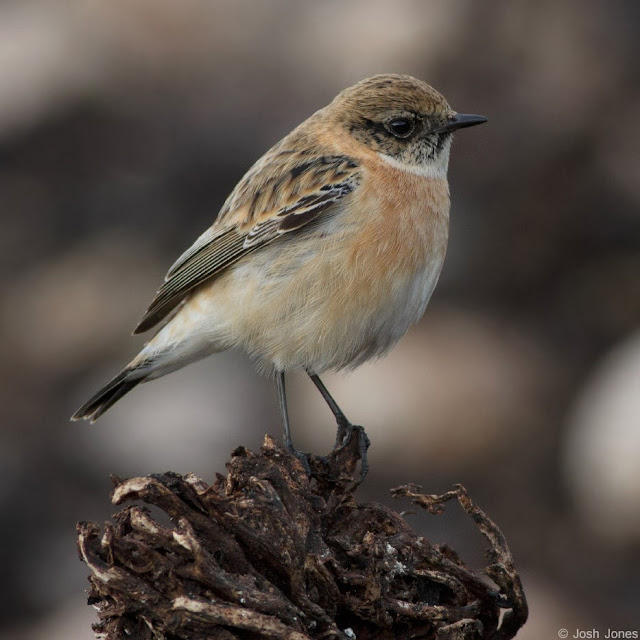 With negative news on the Pacific Diver from the Cornish mainland, our plans to stick in the far south-west over the weekend were all too easily abandoned and we went our separate ways on arriving back in Bristol. Perhaps we should have showed an ounce of perseverance - the diver was seen again today and there's a very smart male Marsh Hawk down there, too! Schoolboy error.
Posted by Josh Jones at 21:54 No comments: 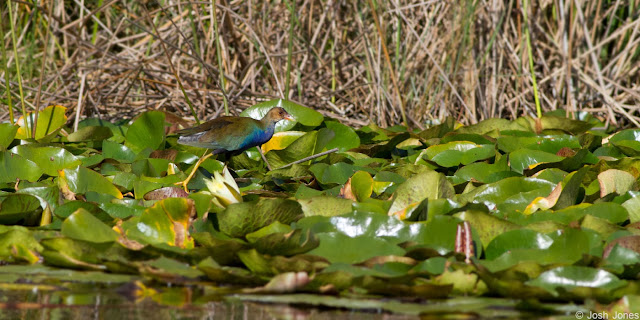 A somewhat uneventful Friday was gradually slipping by without incident until mid-afternoon, when I opened up my Facebook to see that David Monticelli had casually posted a crippling back-of-camera head shot of an American Purple Gallinule from Monsanto, Lisbon! Spluttering my mouthful of tea all over the table, I logged straight on to Skyscanner to check flight prices. Sunday was my only realistic option, and the prices looked good, so I spoke briefly with Rich Bonser and we decided to see if the bird was still there in the morning before booking anything. Later that evening, Rich called to say that he was going on the Saturday as Sunday's flight prices rocketed. I checked myself, and my heart sank - after an expensive autumn, a £500 day return was far too much to bother with, so I left things as they were and forgot about it for the time being.

Next morning, and Rich had text to say the bird was still present and looking well. Another check of Skyscanner for alternatives and it appeared that I could fly out Sunday, returning early Monday for a very reasonable price, and so I booked up late afternoon. David M had very kindly offered to stay in Lisbon an extra night to chauffeur us to the bird, and so I met up with him, Ernie Davies and Christian Leth (who'd flown in from Copenhagen) at Lisbon airport at around 09:30. Within an hour we were watching the gallinule, which was blogging around on the small pond at Parque Florestal de Monsanto. Unfortunately it was relatively distant and soon caught a frog - which it quickly demolished - before retiring to a patch of juncus to rest. 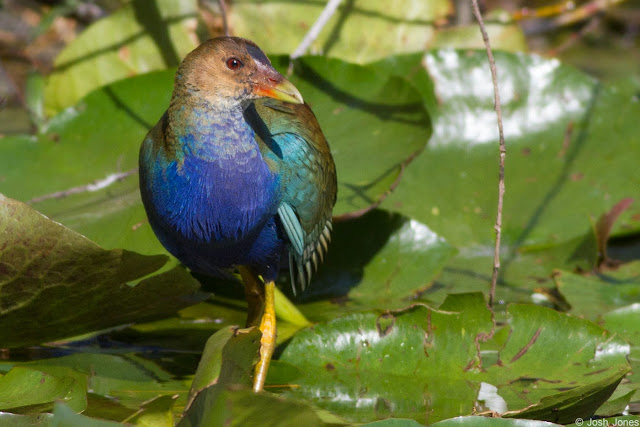 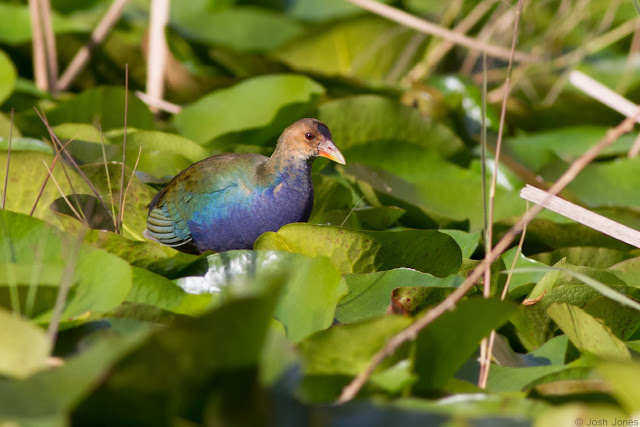 Here it stayed for much of the day, often looking pretty ill. In fact, it would let you approach to within a metre - at which range it was pretty clear that it was frightfully thin. It generally stood with its wings drooped, and we started to get pretty worried that the bird might not last the day. Frustrating for those among us with lenses, but more critically a grim state of affairs for the bird. Fortunately though, it did pick up again in the evening and began to feed/hunt. By this time, the sunlight had left the pond and my photographs aren't anywhere near as good as those taken by others. 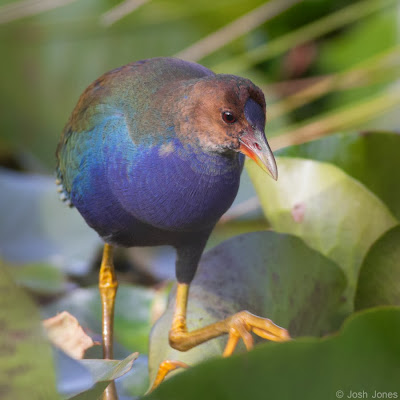 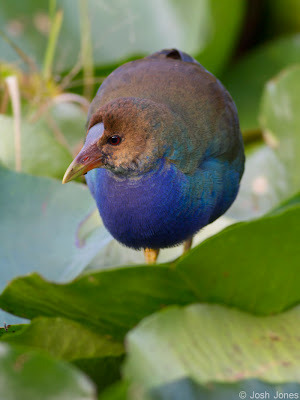 After walking closer it was, at one point, feeding on seeds (and hunting frogs) less than a metre away from us! Much too close for a 400mm lens, so I put it aside and started filming with my iPhone! Even without bright sunlight enhancing the bird's colours, the close views allowed for intricate study. Purple, royal blue, cyan, green, yellow and even orange are present within millimetres of each other: 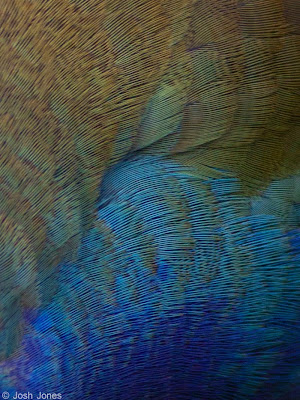 With the sun starting to sink, we left the bird at the pond's edge, seemingly in a better state than we had first feared. Alas it appears this was false hope for the bird was found exhausted and taken in to care on Monday. Though we all hope for a positive outcome, I'd hazard a guess that it's gone past the point of no return. A real shame, as it was a genuine stunner. 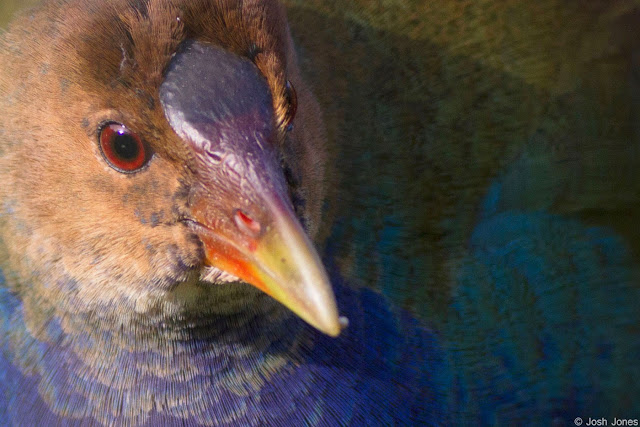 Huge thanks to David for hanging around in Lisbon and making it a great day, rounded off with a nice meal and a few beers in the centre of town.
Posted by Josh Jones at 11:13 No comments: 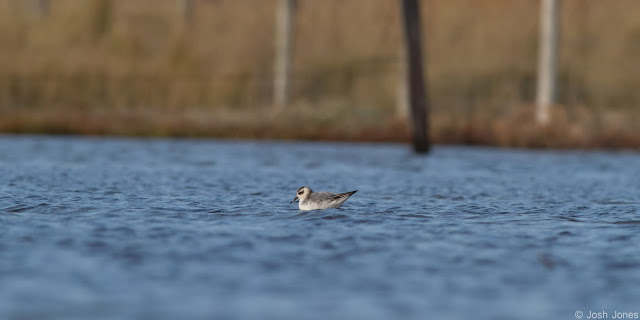 I've not actually seen many showy Grey Phalaropes, so a couple of hours spent with this smart first-winter at Salthouse on Friday morning was most welcome. It spent most of the time in the middle of the pool (c.30m range) but occasionally looped by just a few metres away. The weak late autumn sunshine meant the bird was generally side-lit, so pristine photos were difficult to obtain. Considering this, I'm quite pleased with my results. 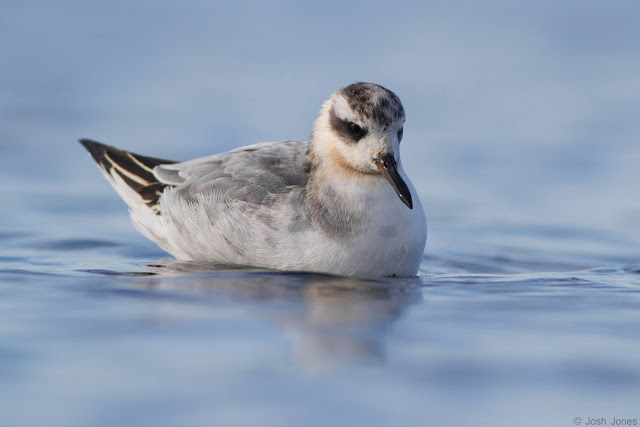 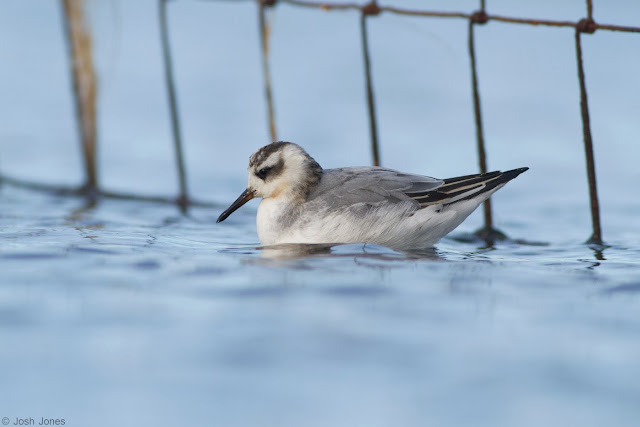 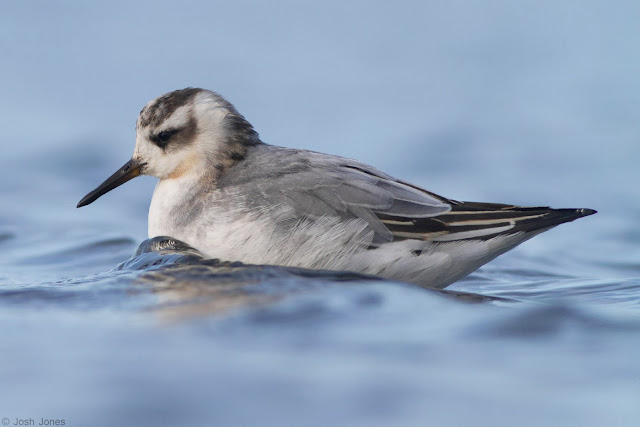 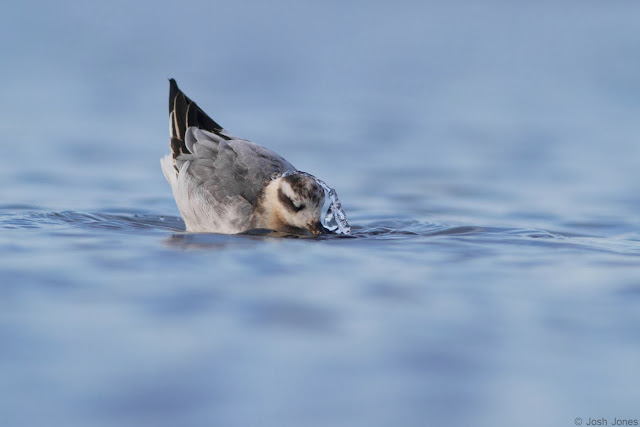 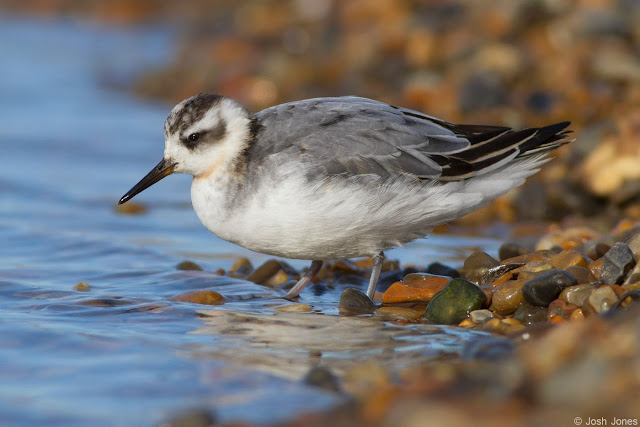 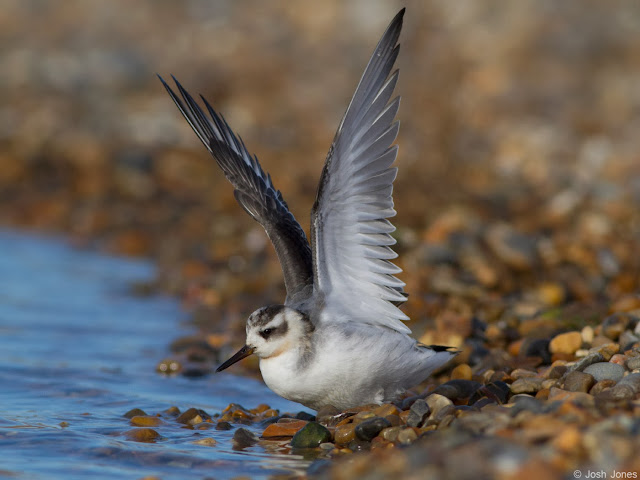